Stories written by Ranjit Devraj
Regional editor Ranjit Devraj, based in Delhi, takes care of the journalistic production from the Asia and Pacific region. He handles a group of influential writers based in places like Bangkok, Rangoon, Tehran, Dubai, Karachi, Colombo, Melbourne, Beijing and Tokyo, among many others. He coordinates with the editor in chief and forms part of the IPS editorial team. Ranjit Devraj has been an IPS correspondent in India since 1997. Prior to that he was a special correspondent with the United News of India news agency. Assignments for UNI included development of the agency’s overseas operations, particularly in the Gulf region. Devraj counts two years in the trenches (1989-1990) covering the violent Gorkha autonomy movement in the Darjeeling Hills as most valuable in a career of varied journalistic experience. 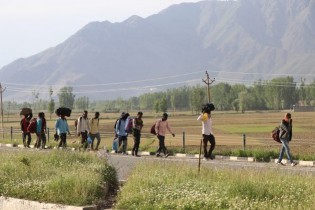 By Ranjit Devraj
If India ranks among the world’s fastest growing economies it is also where inequity is growing the fastest, thanks to endemic features unique to the country such as the caste system.

By Ranjit Devraj
At New Delhi’s Savda Ghevra slum settlement, waterborne diseases have become less frequent thanks to solar-powered water ATMs that were installed here as a social enterprise venture three years ago.

By Ranjit Devraj
Countries do not have to be economically prosperous to move from a situation of high birth and death rates to low fertility and mortality rates. Education, social security, environments conducive to economic development and good value systems are what promote this, as evidenced by the recorded experiences of Asian countries as far apart as Japan and India.

By Ranjit Devraj
Food security activists who secured a moratorium on introducing genetically modified brinjal (aubergine) into India fear that their efforts are being undermined by the release of GM brinjal in neighbouring Bangladesh.

By Ranjit Devraj
As India grapples with rising prices and a rapidly sinking rupee, attention has turned to the country's massive parallel economy that siphons wealth away from development programmes and into the pockets of a corrupt ruling elite.

By Ranjit Devraj
Harsh police handling of public protests erupting across India over a spate of sensational rapes since December has resulted in renewed demands to reform a force that retains the repressive features of its colonial origins.

By Ranjit Devraj
Bhagwat Singh Gohil frets for the future of his bountiful orchards in Mithi Virdi village in western Gujarat state’s coastal district Bhavnagar. “After contending with droughts, rough seas and earthquakes we are staring at the possibility of a man-made disaster in the shape of a nuclear power park.”

By Ranjit Devraj
When India was admitted to the world’s nuclear power industry nearly five years ago, many believed that this country had found a way to quickly wean itself away from dependence on coal and other fossil fuels that power its economic growth.
Next Page »
ADVERTISEMENT ADVERTISEMENT