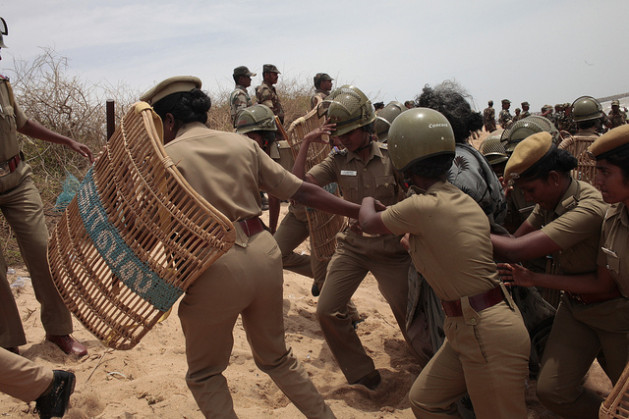 NEW DELHI, May 23 2013 (IPS) - For years India’s pro-liberalisation, Congress party-led coalition government chafed at civil society groups getting in the way of grand plans to boost growth through the setting up of mega nuclear power parks, opening up the vast mineral-rich tribal lands to foreign investment and selling off public assets.

Now, at the end of its tether, the Interior Ministry has cracked the whip on hundreds of non-governmental organisations engaged in activities that “prejudicially affect the public interest.”

"...The government is trying to promote globalisation while cracking down on the globalisation of dissent." -- Achin Vanaik
On Apr. 30 several NGOs were informed that the bank accounts through which they receive foreign funding had been frozen.

“It is shocking what the government has done – but not surprising given the increasingly authoritarian, undemocratic and repressive measures being directed…against anyone who is seen to challenge or disagree with their positions and decisions,” Lalita Ramdas, anti-nuclear campaigner and board chair of Greenpeace International, told IPS.

Ramdas said NGOs concerned with nuclear power, human rights, environment and ecology – areas where corporate and industrial interests were likely to be questioned – appeared to be particular targets of the government order.

Among the worst affected is the Indian Social Action Forum (INSAF), a network of more than 700 NGOs that is currently challenging, in the Supreme Court, the government’s restrictions on foreign funding reaching groups that engage in activities that can be described as “political” in nature.

In its court petition INSAF described itself as an organisation that believes that “the fundamental rights enshrined in the Constitution of India need to be safeguarded against blatant and rampant violations by the State and private corporations.”

INSAF declared in court that it “firmly believes in a secular and peaceful social order and opposes communalism and the targeted attacks on the lives and rights of people including religious minorities, and regularly organises campaigns, workshops, conventions, fact-findings, people’s tribunals, solidarity actions for people’s movements and educational publications.”

“With that kind of a profile we were expecting this crackdown,” Anil Chaudhary, coordinator of INSAF, told IPS. “Still, the government could have waited for the Supreme Court verdict.”

“The same arbitrariness can be applied to green NGOs trying to protect the environment against mindless industrialisation.”

Chaudhary thinks it unfair that NGOs critical of government policies are being singled out. “Instead of selectively freezing the funding of groups under INSAF, the government should order a blanket ban on all foreign funding.”

Among INSAF’s many campaigns is an intiative to bring international financial institutions like the World Bank under legislative scrutiny for their activities in India.

It cannot have escaped the government’s attention that INSAF’s campaigns have run parallel to powerful movements for transparency and clean governance led by social activist-turned-politician Arvind Kejriwal, founder of the Aam Admi Party (Common Man’s Party) that plans to contest general elections due in 2014.

Kejriwal, whose social activity led to the passage of the 2005 Right to Information Act, has also been closely associated with transparency campaigns led by Anna Hazare, who mounted a Gandhian-style fast against corruption in April 2011 that rallied over 100,000 ordinary people.

Street protests demanding good governance have since been a thorn in the side of the government.  When they peaked in December 2012, following the gang rape of a young woman in a bus in the national capital, police took to beating protestors.

The government, starting with Prime Minister Manmohan Singh, has also been frustrated by NGOs’ efforts to stall work on a string of mega nuclear parks along peninsular India’s long coastline, especially at Jaitapur in Maharashtra, Mithi Virdi in Gujarat and Kudankulam in Tamil Nadu.

In February, the government froze the accounts of two leading Tamil Nadu-based NGOs allegedly associated with the protests at the site of the Kudankulam plant, signalling a new and tough stance against civil society groups fighting the displacement of farmers and fishermen by mega development projects.

The two NGOs, the Tuticorin Diocesan Association and the Tamil Nadu Social Service Society, received four million and eight million dollars respectively over a five-year period that ended in 2011, according to declarations they made to the government.

With strong backing from the Church, the groups continue to operate despite the freeze on their assets.

During the same five-year period a total of about 22,000 NGOs across India received roughly two billion dollars in foreign contributions, going by government records.

Unexpected protests have surfaced from among the Congress party’s partners in the ruling United Progressive Alliance (UPA). Devi Prasad Tripathi, general secretary of the Nationalist Congress Party and member of parliament, reminded Interior Minister Sushil Kumar Shinde that the UPA is “committed to protecting and promoting secular, democratic and progressive forces in the country.”

“Effectively, the government is trying to promote globalisation while cracking down on the globalisation of dissent,” commented Achin Vanaik, professor of political science at the Delhi University.

The government’s move stands in stark contrast to promises made not two years ago at the Fourth High Level Forum on Aid and Development Effectiveness in Busan, South Korea, where 159 governments and member organisations honoured the vital role played by the non-profit sector by pledging to foster an “empowering” climate for civil society.

In his most recent report to the United Nations General Assembly, Maina Kiai, special rapporteur on the right to freedom of peaceful assembly and of association, noted with grave concern that India has repressed “peaceful protestors advocating economic, social and cultural rights, such as…local residents denouncing the health impact of nuclear power plants.”