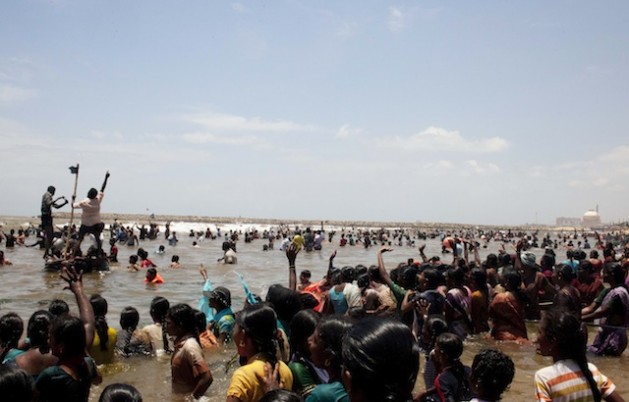 KUDANKULAM, India, Jan 6 2013 (IPS) - Mahalakshmi, a housewife married to a farmer, is afraid for her family’s future. The fifty-two-year-old woman is also frustrated that Indian authorities have “betrayed” poor villagers.

A huge nuclear power plant under the control of the government-run Nuclear Power Corporation of India Limited (NPCIL) is the source of her woes.

The Kudankulam Nuclear Power Plant (KKNPP), situated 24 kilometres from the world famous tourist town of Kanyakumari on the southern tip of the Indian peninsula, is likely to be commissioned this month.

Speaking to IPS, Mahalakshmi and dozens of women in Kudankulam, a village in the Tirunelveli district of the southern Indian state of Tamil Nadu, charged that the energy project would ruin their futures, homes and livelihoods.

The plant is slated to produce an initial 1,000 megawatts of power, according to the NPCIL, no small contribution to a country saddled with a severe energy deficit.

But the proposed nuclear station has brought sleepless nights to scores of locals, who fear a disaster similar to the meltdown at the Fukushima Daiichi nuclear power plant in Japan in March 2011, and the 1986 Chernobyl nuclear catastrophe.

Locals have risen up in widespread protest over the proposed plant, which they claim has not been equipped with the best possible safety measures.

One of these protestors, Arul Vasanth, told IPS that politicians, scientists, and bureaucrats have made every effort to crush agitation against the potentially lucrative KKNPP.

“We, the poor, are at the receiving end of all false promises given by the authorities,” he said. “The risk has been put on our shoulders so the people will aggressively fight till the end.”

Indeed, the vast majority of those participating in the protests live below the government-declared poverty line.

Opposition to the energy project first began when India inked the KKNPP deal with the erstwhile Soviet Union in 1988.

Agitation gained momentum in 1997 when the country signed another agreement with Russia to revive the deal. 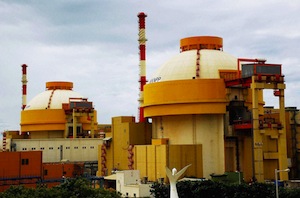 Now, in the aftermath of the Fukushima disaster, which drew the world’s attention to the horrific dangers of nuclear power, the people in Kudankulam have brought their fight into the open.

Talking to IPS, well-known anti-nuclear activist K. Sahadevan questioned the efficacy of government measures to safeguard the health of local people living in the vicinity of the plant.

“Radioactivity-related health hazards are a major concern for the people residing near the plant,” he said, referring to a survey of houses very near to the Rajasthan Atomic Power Station, which revealed a high prevalence of cancer and tumors.

Dr. Binayak Sen, human rights activist and member of the Planning Commission’s Steering Committee on Health, said in a statement after visiting the site that the Kudankulam plant posed serious health consequences, not only for those residing in the immediate vicinity, but for inhabitants of the entire region.

Opposition to the plant has created deep cracks in the villagers’ daily lives. Frequent protests by farmers, fisherfolk, students and coastal dwellers have sent a strong message to the authorities but simultaneously interrupted income-generating activities.

Explaining the ground situation in the villages, Peter Milton, an agitation leader in Idinthakari, told IPS that people are worried and frustrated about their future.

Farmers say the government has failed to compensate them for large swaths of arable land that have now been declared part of the official “construction site”.

One small-scale farmer who has suffered many bureaucratic hurdles in claiming compensation for his land told IPS he favours other sources of energy – such as wind farms – over the proposed atomic power station.

A group of students at St. Annes Higher Secondary School in Kudankulam also expressed distress over a future lived in the shadow of nuclear catastrophe.

“A disaster in the plant will eliminate our dreams. That is why we are agitating,” the students, who wished to remain anonymous, told IPS.

Meanwhile, police and intelligence agencies are stepping up their suppression of protestors. “The threat of the police has put more strain on our lives. Even students and women are not exempted from the harassment,” said Milton.

According to media reports, 269 persons have been arrested in connection with the agitation. Agitation leaders claim the number is much higher, with pending cases running into the thousands.

T. Peter, secretary of the National Fish Workers Forum, told IPS that many people have been taken into custody under the charge of sedition. He alleged that the establishment is trying to “sabotage” the protest movement and crush it with an iron fist.

“The fisher folk residing in the coastal area of Kudankulam are (acutely) aware about the impacts of a nuclear (accident) at the KKNPP. People living in coastal areas between Thiruvananthapuram and Tuticorin will be (particularly) affected if a disaster occurs,” he added.

The Russian envoy to India, Alexander M. Kadakin, branded the anti-nuclear protests “gimmicks” and “games” while speaking to reporters in Chennai.

Regardless, India’s highest judicial bodies have expressed alarm about the lack of safety measures at the proposed plant, going so far as to halt the process altogether.

Litigations are now pending before the Supreme Court of India and the National Green Tribunal.

In November, the Supreme Court instructed the Union Government to deploy all necessary safety measures at Kudankulam.

“There must be no compromise on safety and rehabilitation. We are making it absolutely clear that all the guidelines and safety measures for handling disasters must be put in place before the plant is commissioned,” according to Justices K S Radhakrishanan and Deepak Misra.

Attempting to allay fears of a disaster, nuclear scientists have expressed satisfaction over the safety measures at the Kudankulam plant. Former Indian president and scientist Dr. A P J Abdul Kalam declared the plant to be safe, following extensive discussions with KKNPP officials and a thorough inspection of the plant’s safety features.