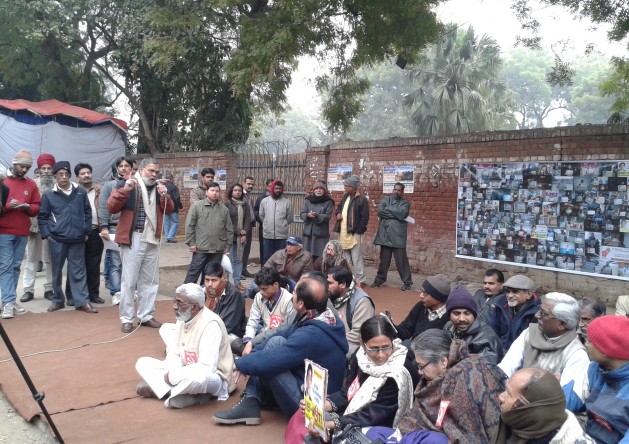 NEW DELHI, Feb 1 2014 (IPS) - Activists opposed to India’s plans to massively increase civilian nuclear power production are aghast that a plan for an Indo-Japanese nuclear cooperation deal is gaining pace even while Japan is struggling to cope with the fallout of the March 2011 Fukushima nuclear disaster.

Japanese Prime Minister Shinzo Abe, who was guest of honour at India’s 64th Republic Day celebrations on Jan. 26, announced in a press statement before leaving that talks for a nuclear cooperation agreement were continuing “with the view for an early conclusion.”

“It would appear that the two countries were only waiting for the anger over the Fukushima disaster to cool down."

At a press conference given jointly with Abe, Indian Prime Minister Manmohan Singh said “negotiations towards an agreement for cooperation in the peaceful uses of nuclear energy have gained momentum in the last few months.”

“It would appear that the two countries were only waiting for the anger over the Fukushima disaster to cool down,” Anil Choudhury, leader of the Coalition for Nuclear Disarmament and Peace (CNDP), which ran a poster campaign and a demonstration protesting against the deal during Abe’s three-day visit, tells IPS.

“CNDP will continue to oppose any Indo-Japan nuclear deal as also will our counterparts in Japan,” Choudhury said. “A simultaneous poster campaign was mounted in Tokyo and letters of protest were sent to both prime ministers by Yukiko Kameya, an elderly evacuee from Fukushima.”

In an open letter to Abe, Laxminarayan Ramdas, a prominent leader of the CNDP wrote: “A country like yours, which was the victim of the first two atomic bombs dropped at Hiroshima and Nagasaki, and the more recent and tragic accident of your nuclear power plant at Fukushima would, one would have thought, helped you to give up this horrible and dangerous source of energy.

“Please do not do us this favour and sell us a potential Fukushima,” Ramdas, former admiral of the Indian navy, told Abe in the letter.

Abe’s visit was marked by marches at sites where mega nuclear parks are functional or in various stages of completion. At the Kudankulam nuclear plant in Tamil Nadu, which became operational in October 2013, protests led by the People’s Movement Against Nuclear Energy (PMANE) have been continuing since September 2011.

According to PMANE leader S.P. Udayakumar, the Kudankulam project built with Russian technology is unsafe and threatens the delicate marine ecology of the Palk straits. “A Fukushima-type accident at this mega plant, which is due to generate 9,200 MW when complete, would be truly catastrophic,” he tells IPS.

The 2004 December Asian tsunami flooded nuclear installations at Kudankulam and tremors were recorded in the area in March 2006 and August 2011, but the government continues to insist that the plant is safe, Udayakumar says.

Safety is a major concern expressed by organisations of farmers and fishermen who live close to other major nuclear parks sites like Jaitapur in Maharashtra state, Mithi Virdi in Gujarat and Fatehabad in Haryana.

“There is very little to inspire confidence as India does not even have a nuclear radiation safety policy in place,” Choudhury said. “The lack of transparency and accountability that exacerbated the Fukushima disaster is far worse in India.”

A Nuclear Safety Regulatory Authority Bill, pending in Parliament since 2011, has been criticised by opposition legislators and activists as failing to give the regulator real autonomy and credibility, although India has gone ahead with plans to boost nuclear power capacity to 20,000 MW by 2020 and 63,000 MW by 2032.

“The scale of peoples’ protests at Kudankulam, Jaitapur and at other nuclear sites has been such that the least the government could do is to ensure that there is an independent regulator to take care of the public interest,” says Anup Kumar Saha, a member of parliament representing the Communist Party of India (Marxist).

Much of the criticism revolves around the fact the regulator is funded by the very organisations it is supposed to be regulating, compromising its ability to act independently. Matters relating to atomic energy are also controlled directly by the prime minister and not parliament, protecting the nuclear establishment from public scrutiny.

M.V. Ramana, physicist and lecturer at Princeton University, tells IPS that the Indo-Japan deal is a corollary to the historic Indo-U.S. nuclear cooperation deal signed in October 2006. Ramana was awarded this year’s Leo Szilard Lectureship Award, given for ‘outstanding accomplishments in promoting the use of physics for the benefit of society in such areas as the environment, arms control, and science policy.’

“The primary motivation for a nuclear agreement between Japan and India is the fact that it is part of the bargain during the U.S.-India deal when the Manmohan Singh government promised to import very expensive reactors from companies like Westinghouse, General Electric and Areva which source key components from Japan,” Ramana says.

“The sad irony is that the deal between India and Japan is being negotiated by democratically elected leaders when their populations are opposed in one way or the other to this agreement,” Ramana adds.