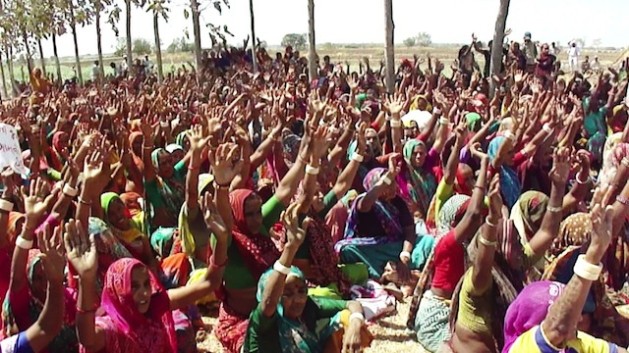 NEW DELHI, Mar 25 2013 (IPS) - Bhagwat Singh Gohil frets for the future of his bountiful orchards in Mithi Virdi village in western Gujarat state’s coastal district Bhavnagar. “After contending with droughts, rough seas and earthquakes we are staring at the possibility of a man-made disaster in the shape of a nuclear power park.”

Speaking with IPS over telephone from Mithi Virdi, Gohil said he and other villagers are unconvinced by official declarations guaranteeing the safety of the Gujarat Nuclear Power Park (GNPP) which, when complete, is due to generate 6,000 megawatts of electricity.

“They could not have chosen a worse site for a mega nuclear power plant – we have a history of earthquakes and fear a Fukushima type disaster in the Gulf of Khambat where the GNPP is coming up,” said Gohil. “Also, Gujarat borders Pakistan, a hostile neighbour. What if this nuclear facility is bombed in a future war?”

On Mar. 5  Gohil and some 5,000 villagers silently walked out of a public hearing  held by the local administration seeking approval for construction for the GNPP which is due to be equipped with six Westinghouse-Toshiba nuclear reactors, each with a 1,000 megawatt capacity.

“We did not want to be party to an illegal public hearing that was seeking endorsement for an environment impact assessment (EIA) report that was flawed and ignored many safety aspects which we are soon going to publish in a parallel document,” Rohit Prajpati, leader of the Paryavaran Suraksha Samiti (Environment Protection Group), a voluntary agency active in Gujarat told IPS.

“To begin with, the EIA was drawn up by Engineers India Limited (EIL), a public sector consultancy that does not have the required accreditation – a fact which is apparent on the government’s own website,” Prajapti said. “An attempt was made to hoodwink the villagers, but they did not buy it.”

According to the terms of reference, EIL was supposed to carry out a detailed risk assessment and provide a disaster management plan, but the final document avoids that responsibility. “We have made written protests about this flawed EIA to the environment ministry,” Prajapati said.

According to V. T. Padmanabhan, independent researcher and member of the Brussels-based European Commission on Radiation Risk, basic safety aspects are being glossed over in the EIAs in the rush to set up a string of nuclear parks along India’s vast coastline.

“The EIA drawn up for the Mithi Virdi project, for instance, ignores the fact that there has been no study conducted on maximum flood levels – and that in an area that is seriously prone to tidal floods,” Padmanabhan told IPS.

“Safety is a moving target in nuclear power plants and is continuously evolving based on the reviews by utilities and the Atomic Energy Regulatory Board (AERB)  besides internationally evolving standards,” Narayanaswamy informed parliament.

But, it is not just the villagers and activists who are worried at the haste with which the public sector Nuclear Power Corporation of India (NPCIL) is going about setting up coastal nuclear power projects – the courts have been lending a sympathetic ear to the protestors.

On Mar. 12, the high court of the southern Andhra Pradesh state halted plans for a 9,000 megawatt nuclear park at Kovvada in coastal Srikakulam district following a petition filed on behalf of local residents and fishermen by J. Rama Rao, a retired naval engineer.

The high court took notice of the petitoners’ plea that the government was going about attempting to acquire land for the 6,000 megawatt nuclear facility even though the project is yet to gain clearance from the AERB.

Kovvada villagers have been on a relay hunger strike since December 2012 against the proposed nuclear power plant. Their petition cited the Chernobyl and Fukushima nuclear meltdowns to say that in the event of an accident, future generations would be affected by radiation contamination.

But, in spite of the protests and intervention by the court the government appears determined to push ahead with plans to generate 40 gigawatts of nuclear energy by 2020, most of it from nuclear parks in various stages of completion along India’s peninsular coastline.

Narayanasamy stated in parliament that electricity will begin to flow from the Kudankulam Nuclear Power Project (KNPP) in southern Tamil Nadu by April. The KNPP, which is designed to generate 9,200 megawatts, has been in the making since 1988 when a deal was signed for its construction between India and Russia.

KNPP is yet to have valid Coastal Regulation Zone (CRZ) clearances. Last November, NPCIL also admitted in the Supreme Court that it had constructed a desalination plant without mandatory environmental clearance, showing how existing rules are being bypassed.

“CRZ clearance is not a technical formality, but an important procedure designed to protect India’s sensitive coastal region,” said Padmanabhan, adding that the haste in setting up coastal nuclear plants contrasts with the bureaucratic red tape that India is known for.

“What we are seeing is a repeat of the Fukushima experience where investigations by a parliamentary committee have shown that although triggered by a tsunami, the meltdown of the rectors was man-made and a result of collusion between the government, the regulators and the utility Tokyo Electric Power Company,” Padmanabhan said.

Poor governance and lack of independent regulatory oversight in the construction of nuclear plants have already been pointed out by the Comptroller and Auditor General, India’s powerful government watchdog.