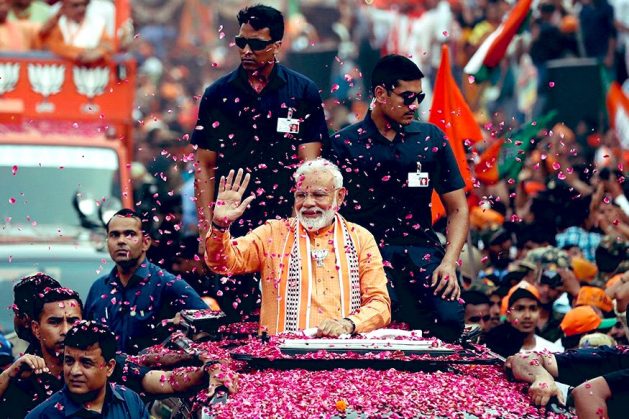 NEW DELHI, May 25 2019 (IPS) - “We worked for the poor and they voted us back to power,” was the explanation that Prime Minister Narendra Modi made to newly-elected legislators on Saturday, May 25, on the spectacular win scored by his nationalist Bharatiya Janata Party (BJP) in India’s just concluded general elections.

Modi’s statement appeared refreshingly simple when seen against the plethora of theories and analyses on the second electoral defeat in a row that the BJP delivered to the venerable Indian National Congress party that led India to independence from British colonial rule in 1947 and had become almost synonymous with governance in the years since.

“More than anything else the election was the victory of Modi’s political leadership,” Ajay Mehra, professor of politics and currently senior fellow at the Nehru Memorial Museum and Library in New Delhi, tells IPS. “Since the assassination of Indira Gandhi in 1984 the leadership quotient has been missing in Indian politics.”

“Modi was astute enough to understand this vacuum while the Congress party singularly failed to restore the leadership quotient when it had the chance while in power during 2004—2014 under Manmohan Singh, who was more manager than political leader,” Mehra says.

Modi’s main opponent, Rahul Gandhi, the son, grandson and great-grandson of former Congress prime ministers did make a bid to fill the leadership vacuum in the run up to the elections but “it was all too little too late,” says Mehra.

According Mehra, Modi never lost an opportunity to project himself as a strong and powerful leader. And the greatest opportunity came in the form of a deadly suicide-bombing attack on an armed forces convoy in Kashmir on Feb. 14, that left 40 troops dead.

Modi, who could never be faulted for his sense of timing, waited until Feb 26, a date close to the general elections, to order Indian air force jets to carry out retaliatory bombing on a militant camp in Balakot, deep inside Pakistani territory.

The Balakot bombing added hugely to Modi’s image as a great nationalist leader ready to defend the country against internal and external threats without hesitation, says Mehra.

Throughout the long and arduous election campaign across the country that followed, Modi repeatedly harped on the Balakot bombing to audience tuned to the idea of Pakistan as a long-standing enemy country which armed and financed terrorist groups tasked with the objective of wresting Muslim-majority Kashmir from Indian control.

It appears that the Gandhi and Congress party leaders learned no lessons from the defeat in 2014 when Modi’s one-time occupation of being a tea-stall vendor in a railway station was made fun of and used as proof that he was incapable of running a large and complex country like India.

This time around Modi’s description of himself as a ‘chowkidar’ (or watchman) taking care of the country’s interests was converted by the Congress party into the slogan ‘Chowkidar chor hai’ (the watchman is a thief) in reference to accusation that a deal to buy Rafael fighter jets from France was tainted and rigged to favour crony capitalist interests.

But, like the tea vendor jibes, the chowkidar slogans backfired with the mass of desperately poor Indian voters identifying all the more with Modi than with the half-Italian Gandhi and his sister Priyanka, who lent a hand in the election campaigning and addressed political rallies.

The campaign focused on the Rafael deal also had the effect of turning the electoral battle into one that was not over issues like rising unemployment, deep agrarian distress and declining manufacture into a personality clash between Gandhi and Modi—one in which the callow Congress leader could only lose to his politically astute and seasoned opponent.

A former spokesperson for the BJP during his long political career, Modi understood the value of building a positive image for himself through carefully arranged political interviews to friendly journalists while scrupulously avoiding the glare of India’s unruly media.

In fact, the only press conference Modi ever gave as prime minister came at the end of his present tenure and that too after elections were safely over. And then he sat through it without uttering a single word but deflecting questions towards his trusted lieutenant and party boss, Amit Shah.

However, Modi was visible everywhere on social media, bear-hugging world leaders one day and sitting in a cave in the snow-clad Himalayas meditating in the saffron robes of Hindu monk the next.

While such images drew derision and mockery from India’s English-speaking elite, the aspirational crowds identified even more with one of them who had made good but was yet rooted in traditional, devoutly Hindu roots.

On Saturday, Modi was elected as leader of the National Democratic Alliance (NDA), a coalition of right-leaning political parties that includes the BJP. Though the BJP won a majority of seats on its own, gaining 303 out of 542 sets while the Congress party secured just 52 seats.

In his address to newly-elected parliamentarians of the NDA, Modi said the ‘pro-incumbency vote’ was the result of the faith that people reposed in him. He vowed to take the whole country along into the future, even his enemies. He’s revised his slogan from 2014 to include the latter part on faith: ‘Sab ka saath, sab ka vikas, sab ka vishwas’ or ‘With everyone, for everyone’s development, with everyone’s faith‘. It was regarded as his assurance that everyone, even his political opponents, could trust him.

Modi also warned the new legislators: “Do not resort to a VIP culture–the people don’t like it.”

According to Rajiv Lochan, political commentator and professor of history at Panjab University, Chandigarh, the Congress party lost mainly because it came to be associated with the worst side of traditional India.

“The Congress believes in castes, it believes in religious groups, it believes that Muslims are one single entity as are Hindus and Sikhs,” says Lochan, referring to the parties ‘vote bank’ calculations to take advantage of horizontal and vertical divisions in Indian society.

“The Congress party also represents the feudal aspect in which people are seen as supplicants. All the Congress policies in this election were designed with the presumption that people are supplicants while the scion who has no energy, no intelligence and no abilities is still the boss directing everyone.

“Think of the stories of tiger hunts by Indian princes in colonial times when a servitor would kill the tiger and insist that it was the prince who had done it,” Lochan tells IPS.

“In contrast,” he adds, “the BJP had a Narendra Modi who was full of infectious energy. He had the ability to energise his audience.”

According to Lochan the BJP also ran a “very modernist campaign that was predicated on promising to empower everyone irrespective of caste, religion and family even increasing its support among Muslims from 9 percent to 12 percent, according to the poll surveys.”

“On the whole, I would say, people voted out the bad of traditional India and voted in the good,” says Lochan.