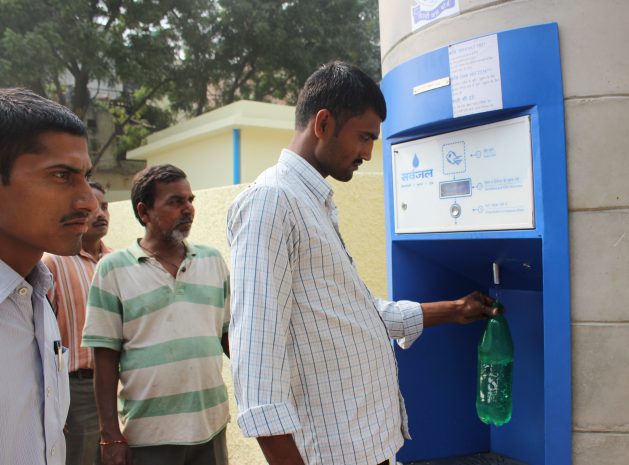 A man draws water from a solar-powered water ATM in New Delhi’s Savda Ghevra slum settlement. Thanks to these machines, which allow users to withdraw water with a rechargeable card, waterborne diseases have become less frequent here. Credit: Ranjit Devraj/IPS

“The water is cheap, reliable and fresh-tasting,” Saeeda, a mother of three who lives close to an ATM, tells IPS. Each day, Saeeda collects up to 15 litres of water from the ATM, paying 30 paisa per litre for the water with a rechargeable card. It means she pays 4.5 Rupees (about 6 US cents) for 15 litres of pure drinking water. It is convenient and cheap as bottled drinking water costs about 20 Rupees (about 30 US cents).

Mishra says that each water ATM, though locally operated through a franchise system and powered using solar panels, is centrally controlled through cloud technology that integrates 1,100 touch points in 16 states. The result is reduced costs that allow round-the-clock provision of pure drinking water to underserved communities.

“This is the kind of decentralised, neighbourhood solutions that the Global Green Growth Initiative (GGGI) is interested in,” the Netherlands-based group’s deputy director and water sector lead, Peter Vos, tells IPS. “However, solutions of this type may not be ideal in all situations, since the networks may require a lot of maintenance and can be costly.”

GGGI, says Vos, is interested in promoting policies that allow efficient use of limited water resources sustainably and at reasonable cost. “We do this by embedding ourselves in key ministries concerned with renewable energy, rural development as well as water and sanitation.”

Currently, GGGI has an approved budget of USD 1.37 million dollars for knowledge sharing, transfer of green technologies and capacity building in order to meet global commitments towards implementation of India’s Nationally Determined Contributions (NDCs) under the Paris agreement. “Facilitating the flow of domestic and international climate finance and investment would be a key contribution to support India’s NDC implementation,” Vos says.

As a predominantly agricultural country, with the world’s largest irrigated area serviced by some 26 million groundwater pumps mostly run on diesel or electricity, GGGI is keenly interested in India’s plans to switch to the use of solar power for irrigation.

Electric pumps are considered unreliable and diesel is costly. To keep them running, India spends about USD 6 million in annual subsidies that create their own distortions. Farmers tend to waste electricity as well as water thanks to the subsidies, Vos explains.

Under India’s National Solar Mission programme, farmers are now supported with capital cost subsidies for solar pump systems. A credit-linked subsidy scheme invites local institutions across the country to provide loans to reduce the subsidy burden on the government and make the system affordable for farmers.

According to a GGGI study released in 2017, the ‘context-specific delivery models’ used in the solar pump programme have resulted in noteworthy initial successes in terms of economic and social benefits, emission reductions, reduced reliance on subsides, increased agricultural output, development of new businesses, job-creation and improved incomes and livelihoods in rural areas.

According to the Food and Agricultural Organisation of the United Nations (FAO), irrigation is becoming an important part of global agricultural production, consuming about 70 percent of global freshwater resources and reliable irrigation. However, using solar-powered systems can increase crop yields four-fold and can be key to national objectives like achieving food security.

The progress has not been entirely without a hitch and, so far, the solar water-pumping market has remained relatively small primarily due to high up-front capital costs and low awareness among farmers as well as users of drinking water provided through ATMs.

A study of the Savda Ghevra slum showed that it took 18 months before the first ATM could be provided to Piramal Sarvajal. And then only 37 percent of the residents were using the ATMs as a primary or secondary source of potable water.

The study found that the ATMs were more than covering operating costs and generating revenue for Piramal Sarvajal, and could reach a wider population with government or other support, especially in the rural areas. The monies generated by Piramal Sarvajal are used to pay salaries and to maintain the machines.

According to the government’s own figures, presented in parliament in 2017; out of 167.8 million households in rural India only 2.9 million or 16 percent have access to safe drinking water. GGGI with its  considerable experience and expertise around the world is well-placed to step in, says Vos.