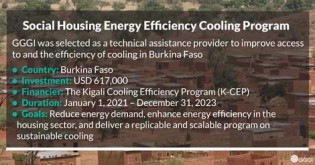 The Kigali Cooling Efficiency Program (K-CEP), a philanthropic collaboration, has selected the Global Green Growth Institute (GGGI) as technical assistance providers to improve access to and the efficiency of cooling in Burkina Faso and Viet Nam.

By Yazeed Kamaldien
While growth in the green economy looks promising, government regulation and a business-as-usual approach are among the hurdles inhibiting cleaner energy production.
Next Page »

Based in Seoul, the Global Green Growth Institute (GGGI) is an intergovernmental organization that supports developing country governments transition to a model of economic growth that is environmentally sustainable and socially inclusive. GGGI delivers programs in 26 partner countries with technical support, capacity building, policy planning & implementation, and by helping to build a pipeline of bankable green investment projects. More on GGGI’s events, projects and publications can be found on www.gggi.org.