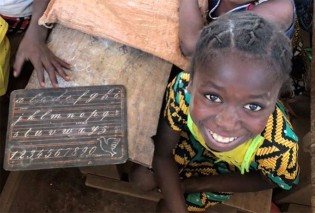 By PRESS RELEASE
The Education Cannot Wait Global Fund (ECW) allocates a total of US$15 million in an initial series of emergency grants for the rapid delivery of holistic education services to protect and support vulnerable children and youth hit by the COVID-19 pandemic in 16 countries/emergency contexts. These girls and boys are already impacted by armed conflicts, forced displacement, natural disasters and protracted crises. An additional series of grants to support the response in other crisis-affected countries will be released shortly and reach partners in-country in the coming days.

By PRESS RELEASE
A global approach is the only way to fight COVID-19, the UN says as it launches humanitarian response plan

By PRESS RELEASE
The Government of Kenya, United Nations and International Community convened today at the UN Complex in Nairobi to combine their forces in their fight against the COVID-19 pandemic in Kenya.

By PRESS RELEASE
The United Nations, European Union and its Member States, and Government of Kenya met, for the first time, to explore ways they can combine efforts to best support the Government of Kenya in achieving its national priorities as outlined in Vision2030, MTPIII and the Big Four agenda.

By PRESS RELEASE
A deep-sea scientific mission to uncharted depths in the Maldives and Seychelles will gather valuable data to support the Commonwealth Blue Charter on ocean action and train local scientists.

By PRESS RELEASE
From 26 February to 28 February 2020, the United Nations in Kenya supported a joint visit to the Frontier Counties of Kenya.

By PRESS RELEASE
On February 20, 2020 – Mr. Ban Ki-moon, 8th Secretary-General of the United Nations, has officially begun his second term in office as the President of the Assembly and Chair of the Council of the Global Green Growth Institute (GGGI). In his letter to Members of GGGI, President and Chair Mr. Ban reaffirmed his commitment to raise awareness of the Institute and its work to tackle climate change and help countries accelerate achievement of the Sustainable Development Goals (SDGs).

By PRESS RELEASE
In just one week, Education Cannot Wait (ECW), with the Governments of Ethiopia and Chad and implementing partners, launched two new multi-year resilience programmes in Chad (7 February) and Ethiopia (14 February) with US$48 million in seed funding over three years to roll out crucial programme activities and catalyse additional resources.

By PRESS RELEASE
At the Closing Ceremony of the III ForumBIE 2030, 38 governments, civil society organisations and academic entities became the first to sign the Universal Declaration of Balanced and Inclusive Education (UDBIE). Furthermore, with the objective of achieving the aspirations and commitments contained within the UDBIE, 30 signatories, including governments and civil society organisations, agreed to establish the Organisation of Educational Cooperation (OEC), a new international organisation from the Global South creating platforms and mechanisms of solidarity-based technical and financial cooperation and support for educational reforms.

By PRESS RELEASE
The number of people displaced in Burkina Faso increased tenfold last year to over 560,000. The figure is predicted to skyrocket to 900,000 people by April as horrific violence continues to force families from their homes.

By PRESS RELEASE
The United Nations Country Team in Kenya is deeply distressed by the rising cases of terrorist attacks on schools, teachers and learners, especially in the north-eastern regions of Kenya. While we stand in solidarity with the affected communities, we reiterate that acts of terror and hate are even more egregious when they target innocent, unarmed civilians including children.

By PRESS RELEASE
There was standing room only as ministers, diplomats, activists and journalists gathered at the IFEMA conference centre in Madrid to mark Africa Day at the COP 25 climate meeting.

By PRESS RELEASE
The African Development Bank and technology firm Microsoft today launched the ‘Coding for Employment’ digital training platform, an online tool to provide digital skills to African youth, wherever they are across the continent.

By PRESS RELEASE
The Government of Russia has announced a voluntary contribution of 1 million US Dollars to the World Food Programme of the United Nations for food assistance to Kenya. WFP will coordinate with the Kenyan authorities the distribution of food supplies to reach families most in need of assistance.

By PRESS RELEASE
The African Development Bank will on Monday kick off a campaign to plead the continent’s case at the world’s leading climate change conference.

By PRESS RELEASE
“We’ve known it from the beginning that equality and women’s empowerment is the true way for sustainable development,” Rwanda’s Minister of Gender and Family Promotion, Solina Nyirahabimana told reporters at a 2019 Global Gender Summit press conference on Tuesday.

By PRESS RELEASE
A new policy paper by the Global Education Monitoring (GEM) Report at UNESCO, released ahead of the UNHCR Global Refugee Forum next month, shows the increasingly important role of cities using education of people on the move as a lever for their inclusion. It calls for international and non-governmental organisations to recognise cities as partners and for governments to clarify and support cities’ role in education.

By PRESS RELEASE
“Investments in gender equality are critical to realizing demographic dividend, but we need to ensure that women have the tools to overcome the barriers they face,” First Lady of Rwanda, Jeannette Kagame told participants at a panel at the Global Gender Summit in Kigali on Monday.