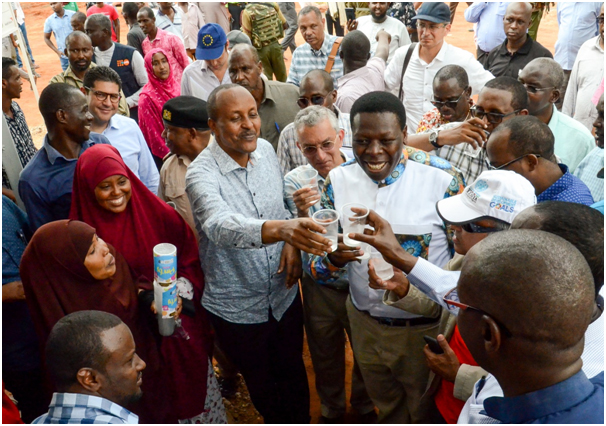 The delegation visit a water pumping and desalination station in Wajir County, constructed under a Public-Private Partnership between the Government of Kenya, USAID, the Swiss Government, World Vision, Boreal Light and the Millennium Water Alliance.

NAIROBI, Kenya, Feb 28 2020 - From 26 February to 28 February 2020, the United Nations in Kenya supported a joint visit to the Frontier Counties of Kenya.

The objective of this mission was to allow delegates from the Government of Kenya, United Nations, and development partners to identify opportunities and innovation beyond what any individual stakeholder can accomplish, assess Public- Private Partnerships at county level, and ultimately promote socio-economic transformation in historically marginalised counties.

The mission was conducted as part on ongoing efforts by the Ministry of Devolution, Arid and Semi Arid Lands ( ASALs) and the UN system to build on the existing United Nations Development Assistance Framework (UNDAF) 2018-2022 which responds to the clarion call by the United Nations Secretary General, Mr Antonio Guterres of “leaving no one behind and reaching the furthest behind first”.

The thematic focus of the mission is on access to water. Specifically, to facilitate both high-level dialogues and visits to development initiatives related to water which have the potential to advance the Kenyan development agenda, the Big 4 and enabling environment, with the CIDPs as its context and the realization of Vision 2030 and MTP III and 2010 Constitution asserting Kenya towards Shared Prosperity.

Analysis shows that a deficit of water impacts negatively on pastoralism and agriculture. Combined with the egregious effects of climate change, scarcity of water is one of the root causes of conflict and a driver of extreme poverty, leading over into degraded health, livelihoods, opening to other negative trends, radicalization, criminality; and forced migration. Water is also one of the most important inputs for industries and economic development: it can have positive impact, unlocking risk capital in SMEs if it is available, or a negative impact if it is scarce.

The development initiatives visited during the mission, which were located in the counties of West Pokot, Turkana, Wajir, Garissa, Isiolo and Marsabit, had common themes of targeted intervention and local ownership. Specifically, these initiatives were conceived to bring water and other essential services to historically marginalized communities and areas, and members of those same communities were supported to undergo technical training to both develop and maintain them.

This visit follows a previous high-level mission organised by the UN and FCDC in 2018, which had a thematic focus of Realization of the SDGs in the Counties which informed the current UNDAF.

The visitors were welcomed by communities that have suffered from recent drought followed by floods and an army of desert locust now threatening food security in the same areas.

The mission was also able to see first-hand the positive effects of devolution.

President Uhuru Kenyatta in his State of the Union address in 2019 said, “ There is No Turning Back on Devolution. The System is sound and has proven its value and contribution to national development. Its potential and value will be greatly enhanced by focus on service delivery, prioritizing development expenditure, unwavering commitment to integrity and anti-corruption, and strict commitment to value for money in procurement. Devolution will, no doubt, transform our Nation.”

Led by the Cabinet Secretary of Devolution and ASALs Hon Eugene Wamalwa and the United Nations Resident Coordinator to Kenya Siddharth Chatterjee, this joint mission had wide representation from the Government of Kenya, the FCDC secretariat, the Council of Governors, the United Nations Country Team in Kenya as well as Ambassadors/High Commissioners/senior representatives from the missions of Norway, India, Russian Federation, Portugal, Switzerland, Netherlands, European Union to Kenya, the United Kingdom and Canada.