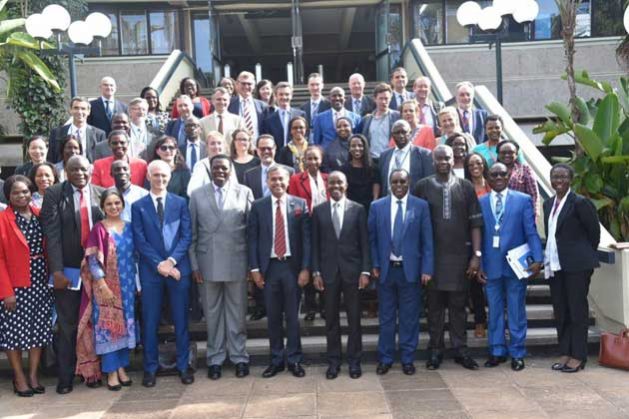 The Government of Kenya, the European Union & the United Nations unite to accelerate Kenya’s Big 4 development agenda and the SDGs. Credit: Barbara @EUinKenya

NAIROBI, Kenya, Mar 10 2020 - The United Nations, European Union and its Member States, and Government of Kenya met, for the first time, to explore ways they can combine efforts to best support the Government of Kenya in achieving its national priorities as outlined in Vision2030, MTPIII and the Big Four agenda.

Over a two-day retreat in Gigiri, Nairobi, the EU and UN committed to:

– working towards a common framework for regular engagements with the Government of Kenya in support of common priority areas such as the devolution process, digitalization agenda, public private partnerships, support for transition to a sustainable green economy and youth and job creation, ensuring that no-one is left behind;
– put measures in place to further harmonize technical assistance to the Government of Kenya in support of national development priorities;
– support Kenya in establishing an Integrated National Financing Framework and rally partners for the sustainable financing of Kenya’s development agenda, including the Big Four agenda.

Mr António Guterres, UN Secretary-General, has stated that there are serious threats to the 2030 Agenda for Sustainable Development and the United Nations, especially its development system, must be effectively reformed in order to be able to limit the impact of those threats. The reform of the United Nations development system involves a set of far-reaching changes in the way the UN development system works to help countries around the world in achieving the Sustainable Development Goals (SDGs). The EU, and its Member States are strong supporters of this UN reform in order to enhance the efficiency and effectiveness of UN development cooperation with Kenya, and all around the world.

Siddharth Chatterjee, UN Resident Coordinator to Kenya stated at the retreat: “As the UN Reforms are rapidly taking shape, we will be defined by how we address the SDGs through a “business unusual” approach. We have to innovate, take risk, leverage and reinforce each other to succeed. That is at the heart of the UN’s repositioning agenda. We are deeply thankful for the strong partnership with the EU and its Member States, and would like to applaud the Government of Kenya for its leadership of this important agenda”

H.E Simon Mordue, EU Ambassador to Kenya, praised the government’s commitment and the UNs’ reform efforts thus far, adding that “We need to act as one, which means enhancing and fully exploiting the full range of synergies of the EU, UN and indeed the Kenyan government and moving to financing coupled with sustained policy dialogue. This will allow us to unleash the full potential of our development support for the benefit of Kenya and her population”.

About the UN in Kenya: Since 1963 the Government of Kenya and the United Nations are partnering to spur the Country’s social economic development. In 1996, the United Nations Office at Nairobi (UNON) was established, becoming one of four major UN office sites and the UN’s headquarters in Africa. Kenya has been a top advocate of Agenda 2030 and was a member of the High-Level Panel of Eminent Persons who advised the United Nations Secretary General on the global development framework beyond 2015, adopted as Agenda 2030 including the Sustainable Development Goals (SDGs). Today there are 23 UN agencies operating from Nairobi, which are delivering as one support to Kenya in line with the USD1.9 billion UN Development Cooperation Framework (2018-2022) which was developed under the co-leadership of the Government and UN in consultation with key stakeholders. For more information: www.kenya.un.org/

About the EU in Kenya: The EU and its member states are a major development supporter of Kenya with over 4.5 billion euro in development assistance to Kenya for the period 2018-2022. EU and its Member States are strong supporters of UN reform in order to enhance the efficiency and effectiveness of the UN’s development cooperation with Kenya, and all around the world, in order to ensure the goals of the 2030 Agenda for Sustainable Development are attained. For more information: https://eeas.europa.eu/delegations/kenya/1376/about-eu-delegation-kenya_en