Stories written by Yazeed Kamaldien
Yazeed Kamaldien is a freelance journalist and photographer based in Cape Town, South Africa. He has worked with print, online, radio and television media in various countries. His website features some of his published stories and photos as well as news about his photographic exhibitions. | Web 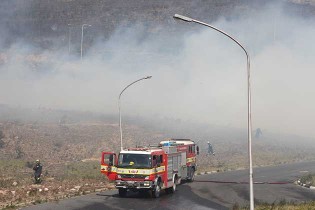 YEMEN: Living With an Endless Revolution

By Yazeed Kamaldien
It was during moments on our rooftop earlier this week - seeing flashes in the air and hearing the heavy pounding of gun fire - when we realised that Yemen’s capital city Sana’a was no longer as safe as we had hoped.

By Yazeed Kamaldien
An estimated 2,555 women in Yemen die annually during childbirth because they do not have access to proper health facilities or experienced medical professionals.

By Yazeed Kamaldien
Yemen’s young anti-government protesters have learnt a vital lesson about the world of politics during their seemingly endless revolution - betrayal is inevitable.

By Yazeed Kamaldien
Children are increasingly facing frontline risks at Yemen’s anti-government protests. Parents are bringing them to demonstrations in the belief that they too are necessary for sacrifices in the revolution against President Ali Abdullah Saleh.

By Yazeed Kamaldien
Popcorn, peanuts, protest posters, tons of tea and the ubiquitous Yemeni flag dominate the anti-government sit-in demonstration outside Sana'a University as entrepreneurs have sought to meet the demands of protesters.

YEMEN: Protest Goes Out With the Candles

By Yazeed Kamaldien
Many are baffled that Yemen’s anti-government protests have so far failed to deliver revolutionary regime change. But a complex context here demands a different kind of political dialogue with power.

SUDAN: Some Southerners Have Hope For Unity By 2011

By Yazeed Kamaldien
Citizens from Sudan’s southern region, long caught in a power struggle with their country’s northern-controlled government, are looking with a mixture of hope and uncertainty to 2011 when they will vote in a referendum on whether or not the south will remain part of Sudan.

SUDAN: “Contractors Have the Freedom To Do What They Want”

By Yazeed Kamaldien
An oil-fuelled construction boom is giving Sudan's capital, Khartoum, an ever shinier veneer. However, some fear that this building spree is taking place at environmental cost.

By Yazeed Kamaldien
Human trafficking, particularly of women and children, in South Africa is not slowing down while the country’s government has not yet implemented legislation recognising this vicious flesh trade as a crime.
ADVERTISEMENT ADVERTISEMENT