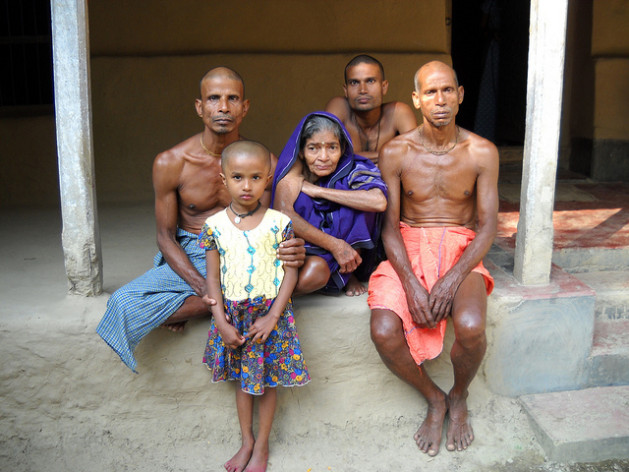 India is home to 25 percent of the World’s Hungry. Credit: Manipadma Jena/IPS

NEW DELHI, Jun 17 2013 (IPS) - As India’s Parliament prepares to pass a bill to provide heavily subsidised food to 810 million people, there are misgivings over its implementation through a notoriously corrupt public distribution system (PDS).

The National Food Security Bill will be debated and passed at a specially convened session of parliament, ahead of the regular monsoon session that begins mid-July.

"Villages (are) building community grain banks and becoming food secure. All that the government has to do is support and foster local self-help groups and replicate this model." -- Devinder Sharma
Opposition legislators will not stop the bill’s passage, but they are already criticising its high cost – estimated at 23 billion dollars annually – as an attempt to win cheap popularity for the Congress-led United Progressive Alliance in an election year.

Critics of the bill include members of the right-wing Bharatiya Janata Party as well as India’s communist parties in the Left Front, with the latter demanding that all of India’s 1.2 billion people be covered under a revamped ‘universal PDS’.

“We want amendments to the bill to ensure that there are no leakages through the creation of bogus categories of people such as those living below the poverty line and those living above it,”  D. Raja, national secretary of the Communist Party of India (CPI), told IPS.

According to Raja, while India certainly needs a food security law, implementing it through the existing PDS will only provide more opportunities for corrupt traders and officials to siphon out money from a dysfunctional system.

Government reports have shown that at least 50 percent of the grain channeled through the PDS – consisting essentially of a network of  50,000 fair price shops – is cornered by traders who then either sell the same grain in the open market at high profits, or export it.

Traders have even been caught selling subsidised grain right back to the government’s procurement agents in connivance with corrupt officials of the state-run Food Corporation of India.

“What is needed is a strengthening of the existing PDS which has become notorious for leakages that have been working to deny poor people access to food, defeating the purpose for which it was created,” Raja said.

That India needs to overhaul its PDS is painfully obvious from the fact that each year its granaries overflow with bumper harvests of wheat and rice, which are allowed to rot in the rain while large numbers of people go hungry.

Over the last decade, the average food grain surplus every year has been around 60 million tonnes. In 2012, the surplus stood at 82.3 million tonnes and this year, with a favourable monsoon underway, a 90 million-tonne surplus is predicted.

The government deals with the surpluses by allowing exports – about 10 million tonnes each of wheat and rice were exported last year – a practice that left-wing politicians and food security experts criticise as unconscionable when thousands of Indians go hungry.

Resolving the paradox of starvation amidst plenty has become a priority, what with India finding itself castigated by the World Food Programme of the United Nations for being home to 25 percent of the world’s hungry.

According to a 2012 report by the Washington-based International Food Policy Research Institute, India has lagged in improving its Global Hunger Index (GHI) rating despite strong economic growth.

In India, 43.5 percent of children under five are underweight, giving it an unenviable GHI ranking of 65 among 79 countries surveyed. From 2005 to 2010, India ranked below Ethiopia, Niger, Nepal, and Bangladesh.

The new bill aims to rectify that situation by distributing some 50 million tonnes of grain to 360 million people, categorised as living below the poverty line, at about 10 percent of prices prevailing in the open market.

But India’s Planning Commission places the poverty line far lower than the international level and calculates it at a pitiable 28.65 rupees (about five cents) worth of daily consumption per head in the cities and 22.42 rupees (four cents) in the rural areas.

“People at such a low level of consumption are not just poor they are in need of emergency food aid,” says Devinder Sharma, one of India’s best-known food security experts and leader of the respected Forum for Biotechnology and Food Security.

Sharma told IPS that it would be impossible to sustain the massive feeding programme envisaged in the bill for more than a few years. “It really does look as if the new policy is designed with a view to win votes in general elections due in May 2014.”

Sharma blames the phenomenon of hunger in India on colossal mismanagement and consistently poor policies. “How else can you explain the paradox of hunger existing for years alongside exports and rotting grain?”

According to Sharma, the government should be addressing hunger through a community approach that builds capacities to become self-reliant rather than depending on doles and subsidies from the government.

“There are many examples of villages building community grain banks and becoming food secure. All that the government has to do is support and foster local self-help groups and replicate this model,” Sharma said.

India should be focusing its efforts on rejuvenating agriculture through a programme aimed at restoring soil fertility, reviving groundwater levels, and stopping the destruction of rich natural resources through unsustainable farming practices.

Most importantly, farmers need to be assured a monthly income. “Since farmers generate wealth in the form of agricultural commodities they should be adequately compensated rather than driven to suicide in droves.”

Sharma believes that India’s farmers have suffered as a result of agricultural imports under World Trade Organisation rules and free trade agreements. “For example, it is senseless to flood the country with duty-free imported edible oils when Indian farmers are capable of meeting the country’s needs.”