Q&A: “Food Is Not a Business, But a Human Right” 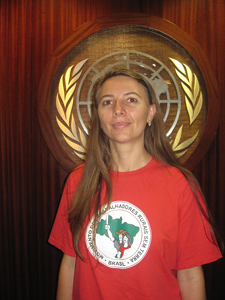 The United Nations (U.N.) highlighted the importance of rural women and small-scale producers during the International Day of Rural Women and World Food Day, held on consecutive days in mid-October and focused on agricultural improvements in developing countries.

Asked about creating a more responsible global food system, Stronzake said that there have to be “relationships between the grassroots movement of the political north and south, because food is not a business but a human right”.

IPS Correspondent Tressia Boukhors talked with her about the role of small-scale producers and rural women in achieving food security and sovereignty, especially in Brazil.

Q: Regarding the situation of food access in Brazil, what does taking a “food sovereignty” approach mean? A: In Brazil, we have a public policy that guarantees food security to the population so people have reasonable access to food. But that doesn’t necessarily mean that there is food sovereignty.

At the same time that we have such programs as Zero Hunger, multinational corporations are appropriating land, cultural knowledge and Brazilian biodiversity.

One of the ways companies do that, for example, is through trans-genetic seeds. These types of biotech packages developed by companies like Monsanto, Cargill or Bunge promote dependence on the part of the population.

So even if the population has access to food, it is not going to be healthy food – it is not local production and does not promote local empowerment of population. On the contrary, it makes the population dependent on multinational corporations.

Q: Fair trade promotes sustainability and better trading conditions for producers in developing countries. Is it a solution to support more responsible food commerce? A: We, as members of Via Campesina, are against treating food as a commodity.

Fair trade is one of the components that can help cure the world’s hunger. Nevertheless, some data from 2009 pointed to a large concentration of commerce in cacao, coffee and tea, so seeing fair trade without seeing food sovereignty in these countries can also bring a problem of monocultures and the concentration of leadership of one or a few NGOs that rule over these fair trades.

Relationships between people in this fight to end hunger cannot be based purely on commerce.

We need to make sure that women continue to have access to food sovereignty and natural resources like water, seeds and plants. Women need to have access to land; they need the process of popular agrarian reform.

However, for women to self-organise, they need to study in order to access education and information. NGOs and institutions need to support them.

Q: Do technologies help create a better future for food access? A: It depends on what technology we are talking about. If this is the multinational corporation’s technologies, like trans-genetic, nanotechnology or biotechnologies we develop in laboratories, it’s not going to work – it creates problems.

There are many studies in Brazil and Latin America about the impact of this technology on people and the environment.

For example, there is a region in Brazil where glyphosate (a synthetic compound) was found in 100 percent of the harvest, and all the women that were breast-feeding were contaminated by this poison.

So when we talk about technologies, it needs to be a truly sustainable technology. We need to look to local technologies, developed by the communities themselves, that are appropriate for that region and that are under the control of those communities.