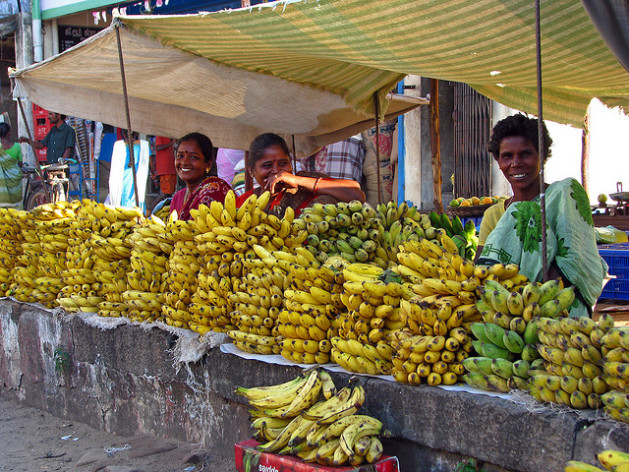 NEW DELHI, Jun 14 2013 (IPS) - India’s environmental and food security activists who have so far succeeded in stalling attempts to introduce genetically modified (GM) food crops into this largely farming country now find themselves up against a bill in parliament that could criminalise such opposition.

"If the new bill is passed...it will only be a matter of time before India becomes a GM banana republic." -- Devinder Sharma
The Biotechnology Regulatory Authority of India (BRAI) bill, introduced into parliament in April, provides for ‘single window clearance’ for projects by  biotechnology and agribusiness companies including those to bring GM food crops into this country, 70 percent of whose 1.1 billion people are involved in agricultural activities.

“Popular opposition to the introduction of GM crops is the result of a campaign launched by civil society groups to create awareness among consumers,” said Devinder Sharma, food security expert and leader of the Forum for Biotechnology and Food Security. “Right now we are opposing a plan to introduce GM bananas from Australia.”

Sharma told IPS that if the BRAI bill becomes law such awareness campaigns will attract stiff penalties. The bill provides for jail terms and fines for “whoever, without any evidence or scientific record misleads the public about the safety of organisms and products…”

Suman Sahai, who leads ‘Gene Campaign’, an organisation dedicated to the conservation of genetic resources and indigenous knowledge, told IPS that “this draconian bill has been introduced in parliament without taking into account evidence constantly streaming in from around the world about the safety risks posed by GM food crops.”

She said that Indian activists are now studying a new report published in the peer-reviewed Organic Systems Journal by Judy Carmen at Flinders University in Adelaide, Australia, showing evidence that pigs fed on GM corn and soy are likely to develop severe stomach inflammation.

“The new bill is not about regulation, but the promotion of the interests of food giants trying to introduce risky technologies into India, ignoring the rights of farmers and consumers,” Sahai said. “It is alarming because it gives administrators the power to quell opposition to GM technology and criminalise those who speak up against it.”

The past month has seen stiff opposition to plans to introduce GM bananas into India by a group of leading NGOs that includes the Initiative for Health & Equity in Society, Guild of Services, Azadi Bachao Andolan, Save Honey Bees Campaign, Navdanya and Gene Ethics in Australia.

These groups are seeking cancellation of a deal between the Queensland University of Technology (QUT) and India’s biotechnology department to grow GM bananas here.

She fears that an attempt is being made to control the cultivation of bananas in India through patents by “powerful men in distant places, who are totally ignorant of the biodiversity in our fields.”

India’s National Research Centre for Banana (NRCB), which has preserved more than 200 varieties of the fruit, is a partner in the GM banana project. Others include the Indian Institute of Horticulture Research, the Bhabha Atomic Research Centre (BARC) and Tamil Nadu Agricultural University.

With so much official involvement there are fears that GM bananas may eventually find their way into nutrition programmes run by the government. “There is a danger that GM bananas will be introduced into such programmes as the integrated child development scheme and the midday meals for children,” Shiva said.

India’s Integrated Child Development Services (ICDS), the world’s largest integrated early childhood programme, began in 1975 and now covers 4.8 million expectant and nursing mothers and over 23 million children under the age of six. Bananas are included as part of the meals served in many of the 40,000 feeding centres.

QUT’s Prof. James Dale, who leads the project, has, in interviews given to Australian media, justified the GM experiment by saying that it will “save Indian women from childbirth death due to iron deficiency.”

According to studies conducted by the International Institute for Population Sciences in Mumbai, more than 50 percent of Indian women and more than 55 percent of  pregnant women in India are anaemic. It is estimated that 25 percent of maternal deaths are due to complications arising out of anemia.

In a Mar. 9, 2012 interview with the Australian Broadcasting Corporation, Dale said, “One of the major reasons around iron is that a large proportion of the Indian population are vegetarians and it’s very difficult in a vegetarian diet to have intake of sufficient iron, particularly for subsistence farming populations.

“India is the largest producer of bananas in the world but they don’t export any; all of them are consumed locally. So it’s a very good target to be able to increase the amount of iron in bananas that can then be distributed to…the poor and subsistence farmers.”

Dale denied in the interview that there were risks to existing Indian banana strains and said because bananas were sterile there is no danger that the genes being introduced will enter and destroy other varieties.

But experts like Shiva have challenged Dale’s claim. She said Australian scientists are using a virus that infects the banana as a promoter and that this could spread through horizontal gene transfer.

“All genetic modification uses genes from bacteria and viruses and various studies have shown that there are serious health risks associated with GM foods,” she stressed, adding that there are safer, cheaper and more natural ways to add iron to diets.

India is the world’s biggest grower of fruits and vegetables with many varieties naturally rich in iron. “Good sources of dietary iron in India included turmeric, lotus stem, coconut, mango (and) amaranth…there is no need to genetically modify banana, a sacred plant in India,” she said.

Attempts by IPS to contact Dale directly and separately through QUT’s press relations department on the risks from horizontal gene transfer and the possible danger to public health failed to elicit any response.

According to Shiva there is a concerted move by food corporations to control important food crops and staples in their centres of origin. “We have seen GM corn introduced into Mexico and there was a determined attempt to introduce GM brinjal in India.”

In February 2010, the then minister for environment, Jairam Ramesh, ordered a moratorium on the brinjal project and his action was seen as a major blow to the introduction of GM food crops in India.

“If the new bill is passed, we could have a reversed situation and projects like GM bananas will be quickly cleared with the backing of the government – and it will only be a matter of time before India becomes a GM banana republic,” Sharma said.