NEW DELHI, Oct 22 2009 (IPS) - Scientists and activists say that but for the fact that the ‘brinjal’, also called ‘eggplant’ or ‘aubergine’, is native to India and a favourite on the table, the decision to allow commercial release of its genetically modified (GM) variety may have gone unremarked. 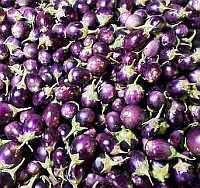 Brinjal, a traditional crop in India, is now the subject of a raging debate on genetically modified food. Credit: Ranjit Devraj/IPS

But the Oct. 14 recommendations of the Genetic Engineering Approval Committee (GEAC) to allow commercial release of Bt-brinjal — brinjal spliced with genes toxic to insects and taken from the soil bacterium ‘bacillus thuringiensis’ (Bt) — after pronouncing it safe for human consumption, kicked up such a row that the government was compelled to back down and seek wider public comment.

The GEAC was set up by the Ministry of Environment and Forests to regulate research, testing and commercial release of GM crops, foods and organisms. But the body has been accused of bypassing safety and environmental concerns and instead working to promote the interests of the international biotech industry.

The Committee was accused by Greenpeace and other non-governmental organisations of allowing seed companies to keep secret the result of GM field trials on the grounds that they were entitled to protect their intellectual property. However, a Delhi High Court ruling in March 2008 that trial data must be revealed under the country’s Right to Information Act has brought to light uncomfortable facts about Bt-brinjal.

On Oct. 15 environment minister Jairam Ramesh announced that a “careful, considered decision in the public and national interest” would be made before Bt-brinjal was released. Ramesh promised additional consultations with scientists, farmers’ groups, NGOs and other stakeholders in January and February next year.

Devinder Sharma, an internationally known food security specialist, said the promised consultations ought to have been made before 2006 when permission was granted to the Maharashtra Hybrid Seeds Company Limited (MAHYCO), acting under license from the global seed giant Monsanto, to carry out field trials for Bt-brinjal in India.

“The brinjal is a traditional crop in India, and the Cartagena Protocol on Biosafety has provisions that discourage genetic modification of crops in their land of origin,” said Sharma. The protocol is a supplement to the Convention on Biological Diversity, an international treaty adopted in Rio de Janeiro in June 1992 to protect biodiversity, ensure sustainable use and equitable sharing of the world’s genetic resources.

“There is little doubt that the brinjal originated in India and that its many varieties have been eaten in India for centuries, fried, steamed, roasted or curried,” said Chitra Devi, a scientist at the National Bureau of Plant Genetic Resources (NBPGR) in New Delhi.

As part of its work, the NPGR has acquired and conserved some 2,500 varieties of brinjal. These range from a large yellow variety grown in southern Karnataka, famed for its butter-soft texture, to the finger-like type popular in West Bengal. A whitish egg-shaped variety taken to America by Portuguese traders in the 17th century gave it the name ‘eggplant’.

One variety of brinjal, the ‘mattu gulla’, is part of religious folklore in Karnataka, where the horticulture department is seeking a geographical indication to help preserve its unique properties.

Devi told IPS that the fears expressed by activists that the bacterial genes introduced into the brinjal could rapidly contaminate the thousands of brinjal varieties, including wild ones, are valid, “because the structure of its flower is conducive to a high rate of cross-pollination.” But she declined to make further comment because of the “huge controversy over Bt- brinjal.”

If cleared for human consumption, Bt-brinjal will be the first GM vegetable crop approved for cultivation anywhere in the world. GM corn and GM soya are mainly used to feed cattle in North America or go into processed foods.

Supporters of Bt-brinjal say that the presence of the bacterial toxin in the crop will help save it from the fruit and shoot borer pest, which destroys substantial chunks of produce, and allow farmers to reduce the use of pesticides drastically. But what the same toxin can do to human health is untested and unknown.

Such are the perceived dangers from Bt-brinjal in India that Anbumani Ramdoss, a former federal health minister and a medical doctor, wrote to Prime Minister Manmohan Singh on Monday asking for a halt to the programme. Ramadoss’s letter, made available to IPS, asked for a “moratorium on all GM crop releases for at least 10 years and until all pending issues are resolved and questions answered”.

As health minister from April 2004 to May 2009, Ramadoss had publicly opposed introduction of GM brinjal into the country on the grounds that insufficient research concerning safety of consumers and impacts on farmers had been done by the joint venture between MAHYCO and Monsanto, a U.S.-based agricultural company.

Ramadoss’s worst suspicions regarding safety were confirmed by the French geneticist Gilles-Eric Seralini, who was commissioned by the environmental group Greenpeace to check the claims made by MAHYCO at the GEAC.

Seralini, who is chairman of the department of molecular biology at the University of Caen in France, pronounced the data submitted by Monsanto-MAHYCO as insufficient and misleading on several counts and the GEAC wanting in diligence.

In July, on a visit to the Indian capital, Seralini told reporters that he hoped this country would not adopt commercial use of Bt brinjal and allow its people to be turned into “lab rats,” since tests have not yet been carried out on how its consumption would affect human health.

Sharma said what is already known is that laboratory rats avoid GM food and when force-fed with it develop kidney and liver damage. “In many parts of the country, cattle left to graze in fields of cotton genetically engineered with the same organism (or Bt-cotton) have died,” he added.

The southern Andhra Pradesh state has warned farmers against allowing cattle to graze in fields where Bt-cotton is grown. But the state governments of Kerala and Orissa have banned GM trials all together within their boundaries. Other states such as Uttar Pradesh, Chhattisgarh and West Bengal have complained of irregularities during field trials and poor GEAC monitoring.

Bt-brinjal has other hurdles to clear. Public interest litigation has been pending since 2004 at the Supreme Court, seeking a more stringent and technically competent system that is capable of safeguarding public health and the environment and conforms to the Cartagena Protocol.

Sharma said what is most important to the consumer is that there is no labeling regime in India for GM foods. This means that Bt-brinjal, once released into local markets, will be indistinguishable from ordinary varieties.

“The case of Bt-brinjal is critical because there are several other edible crops that are now in various stages of genetic modification waiting to follow the same route to the dining table,” said Sharma.