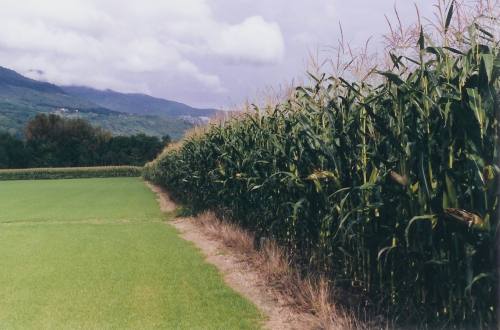 Genetically modified corn in Spain. Credit: Friends of the Earth

MÁLAGA, Spain, Mar 27 2013 (IPS) - Spain has more large-scale plantations of genetically modified seeds than any other country in the European Union (EU).

Based on the number of trials conducted and the area of land planted, Spain accounts for 42 percent of all field trials of genetically modified crops in the EU, according to figures from the European Commission Joint Research Centre.

“Experimentation is being carried out on a wide scale with no knowledge of its consequences for human health, the environment and the future of agriculture,” environmentalist Liliane Spendeler, director of Friends of the Earth Spain, told Tierramérica*.

Her organisation has launched a campaign, “Únicos en Europa”, to inform the public about these crops.

Genetically modified organisms or GMOs, also known as transgenic organisms, are the result of a laboratory process of taking genes from one species of plant or animal and inserting them into another species in an attempt to obtain a desired trait or characteristic, such as resistance to pests or adverse weather conditions like drought.

There is no conclusive evidence that GMOs are harmless to human health and the environment, which has led the World Health Organization to recommend that they be studied on a case-by-case basis.

In 2012, more than 116,300 hectares of land in Spain were planted with MON810 corn, produced by the U.S.-based biotech transnational Monsanto. This was 20 percent more than in 2011, according to figures from the Ministry of Agriculture, Food and Environment calculated on the basis of seed sales.

Environmentalists are critical of the fact that these figures are imprecise estimates, and that there is no public registry specifying the location of these transgenic corn fields.

When certified organic crops are contaminated by genetically modified crops, the farmers lose their organic certification, but cannot sue the owners of the transgenic crops because of the lack of a registry. They cannot demand compensation for losses and damages, either, because there is no provision for this in Spanish or European legislation, explained Spendeler.

In Spain, as in the rest of the EU, only transgenic corn is authorised. Genetically modified soy and cotton are imported from Argentina, Brazil, Canada and the United States.

According to a report from the International Service for the Acquisition of Agri-biotech Applications (ISAAA), published Feb. 20, “From 1996 to 2011, biotech crops contributed to food security, sustainability and climate change” (sic).

A record 170.3 million hectares of transgenic crops were grown globally in 2012, up six percent from 2011, the ISAAA reports. The United States is the biggest producer, followed by Brazil.

But despite the benefits touted by their promoters, such as increased productivity and efficiency and decreased pesticide use, genetically modified seeds have been banned by a significant number of European countries, noted Ferreirim.

In Europe there are 11 countries that prohibit the use of genetically modified seeds, eight of them in the EU, following the addition of Poland in 2013. And in 2012, only Portugal, Spain, Romania, Slovakia and the Czech Republic planted transgenic crops, he added.

A whopping 95 percent of these crops in the EU are concentrated in Spain (88 percent) and Portugal (seven percent).

The bulk of this transgenic corn is used to produce animal feed. “Given that the food pyramid has been turned upside down and there is an ever greater demand for animal protein, it ends up right on our plates,” said Ferreirim.

European legislation requires that food products be labelled if they contain GMOs, unless these account for 0.9 percent or less of the total ingredients.

The animal feed sold in Spain is a mixture of transgenic and conventional corn, which represents a serious violation of cattle farmers’ right to choose non-GMO feed for their livestock, said Spendeler.

Environmental activist Carmela San Segundo, a member of Ecologists in Action in the southern Spanish city of Málaga, stressed the “great power” wielded by the agrochemical corporations that sell genetically modified seeds.

Through the efforts of the non-governmental organisation she works with, a dozen towns in the province of Málaga have declared themselves Transgenic-Free Zones, a legal status recognised by the EU.

“It takes a lot of work, talking with community associations, farmers’ associations, members of local governments. It’s not a problem that people worry about much, because they know very little about it,” she told Tierramérica.

In Spain, the planting of transgenic corn began in 1998 as a means of confronting the economic consequences of insect invasions, according to the Ministry of Agriculture.

But today there are no figures on the real incidence of the European corn borer, the crop’s main insect enemy.

“Can the use of this technology be justified without concrete figures on the losses caused by pests?” asked Ferreirim.

He explained that Monsanto’s genetically modified Bt corn does away with the need to use pesticides because its flowers produce a bacterium that is toxic to these insects.

But even though there is not always a threat of insect infestation, the corn constantly releases this gene, and after harvesting, it remains in the soil, decreasing its fertility, Ferreirim said.

“It has been shown in transgenic crops in various countries that over the long term, secondary pests appear, leading to the need to use other pesticides,” he added.

In addition, GMO field trials are not subjected to any safety controls in Spain, Ferreirem stressed.

According to a survey published in 2010 by the EU, 53 percent of Spaniards were against the splicing of genes from other species into food crops, while only 27 percent were in favour.