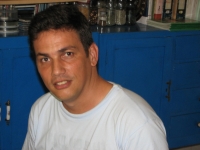 In September, Funes-Monzote coordinated a meeting of experts concerned about transgenics with board and staff members from the National Centre for Biological Security and the Office of Environmental Regulation, one of the institutions entrusted with licensing genetically modified (GM) crops.

The experts issued a statement calling for a moratorium on GM crops until more information is available and society has a chance to debate their environmental and health effects.

The meeting was seen as the first official space open to a segment of Cuba’s scientific community’s concerns about the release of GM organisms into the agricultural system of this Caribbean island nation.

Q: Cultivation of this genetically modified variety, FR-Btl, began in 2008, but opinions against it predate that. Why has it taken until now to ask for a moratorium in order to analyse the advantages and disadvantages? A: The issue was silenced, but in 2008 the alarm was sounded when this maize was planted as a test crop: one hectare that would give way to the planting of 50 hectares, as a prelude to the expansion of the crop in 2009 to 6,000 hectares across several provinces.

Until that moment, it was thought that the work with GM organisms would be kept in the laboratories until there was proof that they would not harm the environment or human health.

We now believe that a moratorium would provide the time necessary to make better-informed decisions and to reflect on the matter, with the participation of the public. Those who think this is a problem exclusive to science and that those in power have the last word are mistaken.

Q: Do you think standards and regulations have been violated? A: The precautionary principle is being violated. That is, there is no visible, public information that allows us to know that all precautions were taken. We are starting from the fact that those who made the decision could have made mistakes.

This year is a crucial time for reconsidering the expansion and maintenance of this crop because the permit granted by the Office of Regulation expires. But we have been told that it is not in their power to issue a moratorium and that the decision to release this variety of maize had a technical component as well as a political component.

Q: Is it possible to halt a process that appears to be quite advanced already? A: A moratorium would allow for a process of public consultation and debate. There is a political decision as well as a political risk, because Cuba is being seen as a promoter of transgenics that the progressive world opposes.

And it is not only opposed because of the control of the transnational corporations, but also because of the technology’s impacts on agriculture, which can have adverse effects for the population and threatens the fragile biological balance.

Q: How much has been planted of this variety of maize, which is resistant to the armyworm (Spodoptera frugiperda) and to herbicides? In what conditions has it been cultivated? A: They haven’t reported this year’s total. According to the permit, they can cultivate the FR-Btl variety in fields from Havana to Camagüey (534 kilometres away). Pinar del Río in the west and the eastern region are excluded, but who can assure us that the seeds have not crossed provincial borders?

We don’t know the results or how many areas were planted in total. There was a meeting at the Centre for Genetic Engineering and Biotechnology to report on the results of the first year of planting, but there is no written record. Undoubtedly there has been a lack of transparency in this process, which is a matter for all society.

Q: But have you and other experts been able to directly observe in the countryside how this GM maize is developing? A: From what I saw in Sancti Spíritus (a central province), I can affirm that the biological security guidelines are not being taken into account. In other words, the technology is not being applied as it was originally conceived, which threatens the traditional maize varieties and, as its promoters affirm, leads to “the death of the technology.”

Not all farmers are following the technological instructions, nor did they receive adequate training or technical assistance. We have seen some farmers giving the seeds to others, planting it without any precautions and unaware of the conditions clearly defined by the National Centre for Biological Security.

Q: What are the principal risks of applying transgenic technology under the conditions existing in Cuba? A: The fundamental risk in the opinion of the agro-ecological movement, which is 20 years old in this country, is the expansion of a technology that threatens biodiversity and reduces the ability of native varieties to adapt, for example, to climate change, drought or changes in temperature.

Maize production in Cuba, as does all agricultural production, faces many other challenges, and it is a mistake to think that GM crops alone will increase yields.

As for potential harm to human health, it is necessary to conduct tests that prove this transgenic maize can really be consumed without danger in Cuban households. If such tests have been done, then they should be made available.

*This story is part of a series of features on biodiversity by Inter Press Service (IPS), CGIAR/Biodiversity International, International Federation of Environmental Journalists (IFEJ), and the United Nations Environment Program/Convention on Biological Diversity (UNEP/CBD) — all members of the Alliance of Communicators for Sustainable Development (www.complusalliance.org).