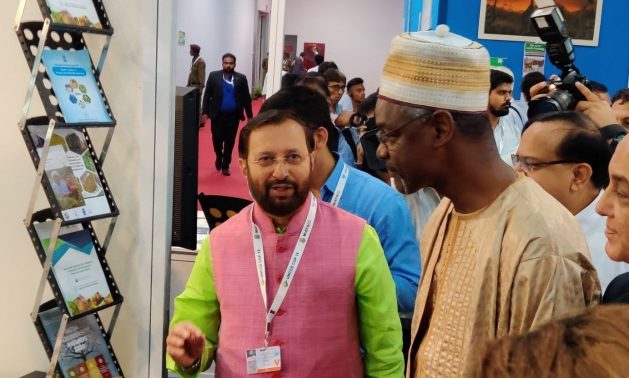 India’s minister for environment, forests and climate change, Prakash Javadekar (left), said he would be happy if CoP 14 could achieve consensus on such difficult issues as drought management and land tenure. Courtesy: Ranjit Devraj

NEW DELHI, Sep 4 2019 (IPS) - Expectations are high, perhaps too high, as the 14th Conference of the Parties (CoP 14) of the United Nations Convention to Combat Desertification (UNCCD), now into the third day of its two-week session, is being held outside the smog-filled Indian capital of New Delhi.

At the inauguration on Monday, India’s minister for environment, forests and climate change, Prakash Javadekar, soon after ceremonies to mark his taking over as president of the Convention for the next two years, said he would be happy if CoP 14 could achieve consensus on such difficult issues as drought management and land tenure.

Other issues on the agenda of CoP14, themed ‘Restore land, Sustain future’ and located in Greater Noida, in northern Uttar Pradesh state, include negotiations over consumption and production flows that have a bearing on agriculture and urbanisation, restoration of ecosystems and dealing with climate change.

According to Ibrahim Thiaw, executive secretary of the Convention, CoP14 negotiations would be guided by, its own scientific papers as well as the Special Report on Climate Change and Land of the U.N. Intergovernmental Panel on Climate Change (IPCC), released in August.

“Sustainable land management can contribute to reducing the negative impacts of multiple stressors, including climate change, on ecosystems and societies,” the IPCC report said. It also identified land use change as the largest driver of biodiversity loss and as having the greatest impact on the environment.

Javadekar said he saw hope in the fact that of the 196 parties to the Convention 122, including some of the most populous like Brazil, China, India, Nigeria, Russia and South Africa have agreed to make the U.N. Sustainable Development Goal of achieving land degradation neutrality (LDN) targets by 2030 as national objectives.

But the difficulty of seeing results on the ground can be gauged from India’s own difficult situation. Nearly 30 percent of India’s 328 million hectares, supporting 1.3 billion people, has become degraded through deforestation, over-cultivation, soil-erosion and wetland depletion, according to a satellite survey conducted in 2016 by the Indian Space Research Organisation.

A study, conducted last year by The Energy and Resource Institute (TERI), an independent think-tank based in New Delhi, estimates India’s losses from land degradation and change in land use to be worth 47 billion dollars in 2014—2015.

The question before CoP14 is how participating countries can slow down loss of land and along with it biodiversity threatening to impact 3.2 billion people across the world. “Three out of every four hectares have been altered from their natural states and the productivity of one every four hectares of land has been declining,” according to UNCCD.

Running in parallel to CoP14 is the 14th session of UNCCD’s committee on science and technology (CST14), a subsidiary body with stated objectives — estimating soil organic carbon lost as a result of land degradation, addressing the ‘land-drought nexus’ through land-based interventions and translating available science into policy options for participating countries.

On Tuesday, as CoP4 launched into substantive business, the participants at the CST and other subsidiary bodies began to voice real apprehensions and demands.

Bhutan representing the Asia Pacific group, highlighted the need for cooperation at all levels to disseminate and translate identified technologies and knowledge into direct benefits for local land users.

Bangladesh pointed out that LDN targets are sometimes linked to transboundary water resources and also called for mobilising additional resources for capacity building.

Colombia, speaking for the Latin America and Caribbean group, appreciated the value of research by the scientific panels, but urged introduction of improved technologies and mitigation strategies to reduce the direct impacts of drought on ecosystems, starting with soil  degradation.

Russia, on behalf of Central and Eastern Europe, mooted the establishment of technical centres in the region to support the generation of scientific evidence to prevent and manage droughts, sustainable use of forests and peatlands and monitoring of sand and dust storms.

Civil society organisations, led by the Cape Town-based Environmental Monitoring Group, were also critical of the UNCCD for putting too much emphasis on LDN and demanded optimisation of land use through practical solutions that would ensure that carbon is retained in the soil.

“Retaining carbon in the soil is of particular value to India and its neighbouring countries, which presently have the world’s greatest rainwater runoffs into the sea,” says Himanshu Thakkar, coordinator, South Asia Network on Dams, Rivers and People (SANDRP), a New Delhi based NGO, working on the water and environment sectors.

“What South Asian countries need to do urgently is to improve the rainwater harvesting so as to recharge groundwater aquifers and local water bodies in a given catchment so that water is available in the post-monsoon period that increasingly see severe droughts,” Thakkar tells IPS. “This is where governments can be supportive.”

Benefits such as preventing soil degradation and consequent landslides that have become a common feature in South India, Sri Lanka and Bangladesh.

A study published in May said half of the area around 16 of India’s 24 major river basins is facing  droughts due to lowered soil moisture levels while at least a third of its 18 river basins has become non-resilient to vegetation droughts.

Responding to the suggestions and demands the Secretariat highlighted  recommendations to ensure mainstreaming of LDN targets in national strategies and action programmes, partnerships on science-policy to increase awareness and understanding of LDN and collaborations to assess finance and capacity development needs.

In all, the delegates, who include 90 ministers and more than 7,000 participants drawn from among government officials, civil society and the scientific community from the 197 parties will thrash out 30  decision texts and draw up action plans to strengthen land-use policies and address emerging threats such as droughts, forest fires, dust storms and forced migration.

“The agenda shows that governments have come to CoP14 ready to find solutions to many difficult, knotty and emerging policy issues,” said Thiaw at the inaugural session. The conference ends with the parties signing a ‘New Delhi Declaration’ outlining actions to meet UNCCD goals for 2018-2030.