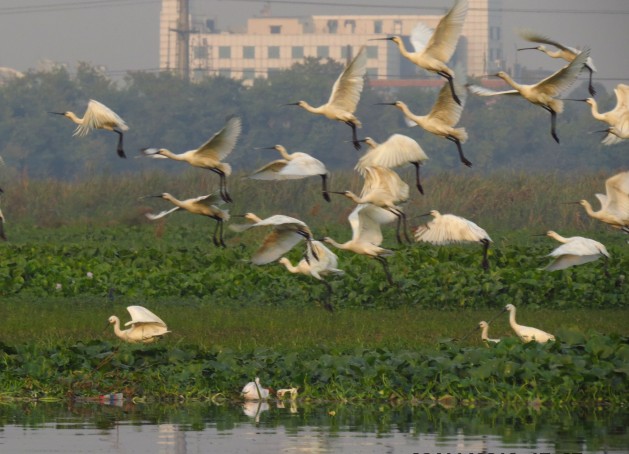 NEW DELHI, Aug 22 2013 (IPS) - Every winter the Okhla wetlands, a charmed haven in the heart of India’s bustling capital city, play host to Greater Flamingoes, Greylag Geese, Tufted Pochards, Northern Shovelers and other exotic, feathered visitors winging in from colder climes as far away as Siberia.

These avian migrants join hundreds of local water birds to breed in the Okhla Bird Sanctuary and Wildlife Park – a four square kilometres patch of wetland on the Jamuna river. The river is struggling to survive amidst costly real estate and development projects in the state of Delhi on the west bank of the river and Uttar Pradesh state on the east.

Conservationists now warn that unless there is a halt to construction activity on the banks of the Jamuna and to the pumping of raw sewage and effluents into the river, the annual spectacle of colours and shapes winging into the Okhla sanctuary will soon be nothing more than a cherished memory.

According to Tarun Kumar Roy, coordinator of the Asian waterbird census of Wetlands International (WI), some 10,000 birds could be counted at the Okhla sanctuary a decade ago. “That number has now been reduced by half, to around 5,000 birds,” Roy told IPS.

Wetlands International, a Netherlands-based not-for-profit organisation, works to conserve wetlands and their resources for people and for the cause of biodiversity.

Roy, who has been working to get the Okhla sanctuary recognition as a site protected under the 1971 Ramsar Convention, says the dwindling bird numbers have dashed his hopes.

Other experts believe that it is still possible to gain recognition for the Okhla sanctuary as a Ramsar site so that it can benefit from international support through the treaty designed to stop encroachments on wetlands with ecological, economic, cultural, scientific and recreational significance.

“The fact that a good number of transcontinental migratory birds visit the Okhla sanctuary makes it an outstanding candidate for designation as a Ramsar site,” Faizi S. Faizi, who is a member of the expert committee on biodiversity and development at the United Nations Convention on Biological Diversity, told IPS.

Faizi says it is helpful that the Okhla sanctuary has been certified as an ‘Important Bird Area’ by Birdlife International for its ornithological importance.

Gopal Krishna, coordinator of Toxics Watch, a major environment group based in the capital, said it is up to the ministry of environment and forests to get the Okhla sanctuary rated as a Ramsar site. “If the ministry has failed in this regard it is only due to pressure from the powerful construction and real estate lobbies,” Krishna told IPS.

“It is hard to believe that the officials of the ministry are unaware of encroachments into a national sanctuary located barely five kilometres away from its offices,” said Krishna.

“How could, for example, a heavily polluting waste-to-energy incinerator come up on the edge of the park without ministry clearance?”

Krishna said the future of the Okhla sanctuary now rests greatly on a series of cases filed by environmentalists and local residents at the National Green Tribunal, a special fast-track court that handles contentious cases relating to environmental issues.

“The most important of these cases relates to the waste-to-energy incinerator that has been functioning since January 2012 within the eco-sensitive zone of the Okhla sanctuary,” said Krishna. “A judicial commission of the tribunal has established that the emissions from the plant are 25 times above the permitted limit.”

In July, the school of environmental sciences at New Delhi’s Jawaharalal Nehru University released the results of a study that found the air around Okhla to be severely polluted with lead, nickel, cadmium and cobalt that could only have come from the incinerator.

“The high chimneys of the Okhla incinerator are a serious threat to migratory birds since they emit a range of toxic gases into their flight path,” said Roy.

On Aug. 14, the tribunal suspended further unauthorised construction in a 10-km wide eco-sensitive zone around the Okhla sanctuary, and ordered a fresh survey of the area by central and provincial authorities with a view to protecting it.

Faizi said the tribunal order has come not a moment too soon. “The Okhla waste-to-energy incinerator is absolutely unacceptable in this critical bird area and must be removed without further delay,” he said.

Feathered visitors to the Okhla sanctuary that figure on the ‘red-list’ of endangered bird species of the International Union for Conservation of Nature include the Ferruginous Duck, Black-tailed Godwit, River Lapwing, Egyptian Vulture, Oriental Darter, Painted Stork, Black-bellied Tern and Black-headed Ibis.

The tribunal is currently hearing multiple petitions asking for intervention against property developers, builders and a ‘sand mining mafia’ that defy existing rules that can help protect the Okhla sanctuary.

After it was discovered that illegal sand mining had caused the Jamuna to shift its course eastward, a crackdown involving seizures and arrests was carried out by Durga Shakthi Nagpal, administrator of Uttar Pradesh’s Gautam Budh Nagar district in which much of the Okhla sanctuary falls.

But on Jul. 28, three months after the crackdown was launched, Nagpal was controversially suspended by her political bosses in what was widely seen as a backlash from the construction industry that uses large quantities of river sand for its cement and concrete mixes.

Faizi said that only a people’s movement could save the sanctuary, which acts as a ‘green lung’ for congested and polluted Delhi that is home to 20 million people. “Recognising the Okhla sanctuary as a Ramsar site would be the best way to generate public interest in protecting one of the world’s truly unique wetlands.”