BHUBANESWAR, India, Feb 5 2010 (IPS) - At dawn, 65-year-old Indian share farmer Gundicha Rout goes to the stone water trough in his backyard to wash his face and prepare for paddy husking. He reaches out for the water, dipping into a thin film of oil on its surface. As he swishes the water in his mouth, there is a bitter metallic taste. 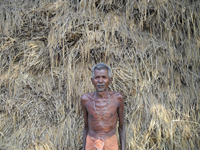 It has been like this in Patharakata hamlet in Rampei village, Cuttack district in Orissa state, located in India’s mineral-rich central eastern belt, during the three years since Maheshwary Ispat, the sponge iron factory next door, started production.

Rout has not been able to do much about this, except to join a villagers’ protest at the factory gates last week. That was the seventh time he has done so over the last few years.

India is the world’s largest producer of sponge iron – which is extracted from iron ore and is used in making steel. The country produced an all-time high of 20 million tonnes in 2008-09, compared to just one million tonne in 1988 due to the quantum jump in demand for steel for housing and infrastructure in the last decade. Production is slated to double to 110 million tones by 2020, according to India’s National Steel Policy 2005.

But the process of extracting sponge iron releases many effluents in the air and water, drawing protests about air pollution and environmental damage from local communities.

At the same time, the supply of coking coal, which is used in the manufacture of steel and steel scrap, which is feedstock for traditional steel-making process, is not keeping up. Sponge iron has emerged as the viable alternative feedstock, produced through Direct Reduction of Iron (DRI), a process in which oxygen is removed from iron ore using coal or gas as the manufacturing base without need for a furnace. It is a low-capital, high-profit industry with short gestation.

Since the mid-2000s, small and medium sized production factories have mushroomed in India’s coal and iron-rich central eastern belt. Orissa, Chhattisgarh, Jharkhand and West Bengal states have emerged as the hub of sponge iron industries.

But the coal-bearing regions are also forest-rich, inhabited by disadvantaged tribal and forest-dwelling communities dependent on the forest and agriculture for their survival.

This coal industry is inherently a highly pollutive one. Ideally, for instance, 154 tonnes of iron ore of more than 65 percent iron content and 120 tonnes of coal with 35 percent ash content or ‘B’ grade are required to produce 100 tonnes of sponge iron.

“But the better coal is often privately sold away by the mining companies, and coal with 50 percent ash content is provided to these industries. Sometimes even stones are mixed with them to increase the weight. Hence, raw material requirement goes up from 174 to 370 tonnes for producing the same quantity,” says Ahkila Kumar Swar, senior environmental engineer with the government’s Orissa State Pollution Control Board (OSPCB).

Where normally a 100 TPD kiln would generate 17,500 kilogrammes of dust every day, it generates 23,000 kg or more. Emissions of 60 kg with the use of electro-static precipitators — the main air pollution control devices — are normal. But residents of affected communities complain that factories switch off these devices at night to save on energy costs.

The flue gas containing fine dust particles from the factories and blown by the wind from layers already on the ground thus settle on every surface, including water in troughs, wells, ponds, plants, on food stuff — even on clothes hanging out to dry.

Respiratory ailments like tuberculosis, asthma, dust allergy, dry cough, throat irritation, chronic bronchitis and eye inflammation are all too common among communities living within a radius of four to five kilometers of sponge iron factories.

Emitted oxides of sulphur, nitrogen and hydrocarbons — also responsible for the oily film on Gundicha’s water trough — are culprits for pollution. Toxic heavy metals in the air like chromium, cadmium, nickel are human carcinogens that manifest after several years of exposure, according to a 2009 study by the Orissa-based non-government organisation Basundhara.

“Is this the place for a polluting factory to come up?” says a livid Prashant Sarangi, headmaster of the government school Radhanath Vidyapith in Khuntuni, two kilometres on the road to Maheshwary Ispat.

Ore-bearing trucks pass by the school at least 200 times a day, leaving clouds of black dirt each time. The sponge iron factory has not bothered to paved the short dirt road leading from the highway to it or sprinkle water on it at regular intervals, which is mandatory.

Suta Behera, a female share farmer in Rampei, says that even the rice they grow in polluted paddy fields has become dusty brown and is so tough that it does not soften even four hours of cooking. No one likes to buy this rice, so they residents had to consume it themselves. Yet rice contributes 80 percent of their nutritional needs.

Pollution is far worse in clusters, as in Orissa’s Sundargarh and Keonjhar districts, where 62 of the 107 sponge iron units operate from five to seven unit clusters. Besides paddy, fruit-bearing vegetation like mango, lemon, papaya are coated in fly ash and coal dust for months, except when the rains come.

“Over a prolonged period, both plant and fruit are stunted. Consuming grass and leaves covered with these pollutants (also make) livestock produce less milk,” states a written complaint from community groups to the Public Complaint Cell of the OSPCB.

Located west of Orissa, Chhattisgarh carved itself from Madhya Pradesh as an independent state in 2000. It sits on more than 41,000 million tonnes of coal deposits, attracting sponge iron industrialists in droves. Many of them now wield enough backdoor political clout to ignore pollution control rules, members of the ‘panchayat’ or local village assembly say.

In Siltara, 10 km from Chhattisgarh’s capital of Raipur, a cluster of more than 30 sponge iron factories are operating even though rules prohibit less than five-km distances between two factories and one km from residential areas. Few have the mandatory 15 to 30-metre width of protective greenbelt around their units. Communities protest at the gates, shouting “we want food, not iron”.

In Jharkhand, another tribal-dominated state in this coal belt where locals are restive over pollution complaints, two men in their 30s, Meghnath and Biju Toppo, started recording on video evidence of pollution, the simmering, sometimes raging wrath of community members against the factories, the anguished helplessness of mothers’ whose infants suffer from the effects of this problem, and the views of wise though unlettered elders arguing that industrial growth cannot be gained at the cost of human lives, environment, agriculture and livestock.

In response to pressure from angry communities, state governments are doing damage control, insisting that the larger manufacturing units set up captive power generation plants utilising the main solid waste char, mixed with coal. A few are now using flue dust to make bricks and also briquettes for fuel or dumping it in low waste land.

The Orissa government is developing a cluster development programme, with the help of the United Nations Industrial Development Organisation (UNIDO), to improve productivity, reduce emissions and link the clusters with carbon credits under the Clean Development Mechanism.

To many, the situation is so bad that things can only improve. “But how soon?” asked the headmaster Sarangi.