SRINAGAR, Feb 13 2011 (IPS) - Several species of fish unique only to the waters of Kashmir are in danger of extinction due to high levels of pollution, environmentalists say. 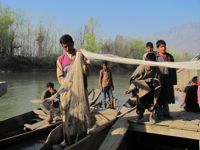 A fisherman tries his luck in Dal Lake in Srinagar. Credit: Athar Parvaiz

Limnologist and professor A. R. Yousuf, a specialist in fresh water lakes and rivers, says the excessive and unchecked use of pollution-causing herbicides, pesticides and fertilizers of sub-standard quality dumped into Kashmir waters is the main threat to the survival of these fish species.

Yousuf’s list of endangered fish species includes the rama gurun (botia birdi), once abundant and even caught in commercial quantities, which has now almost disappeared.

Experts like Yousuf are worried that the use of herbicides, pesticides and fertilizers for agriculture and horticulture has picked up enormously in recent years.

Yousuf said their experiments have revealed that the local fish species are most sensitive to the pollutants. “Their larvae or juveniles get poisoned by these pollutants and die,” he added.

Kashmir’s Pollution Control Board (PCB) has been constantly warning the government about the heavy environmental pollution in Kashmir valley and its direct impact on the lakes and the River Jhelum, the major breeding ground of native species of fish in Kashmir.

A recent survey conducted by the PCB found that more than 40 million litres of untreated liquid waste from Srinagar city alone, as well as 350 metric tons of solid waste, get dumped into Kashmir’s bodies of water including the River Jhelum and Dal Lake.

The records of Kashmir’s Agriculture Department reveal that Kashmiri farmers used 50,000 quintals of pesticides and herbicides in their farms in 2010.

“There is an annual increase of 20 percent in the consumption of these substances,” says Assistant Director for Agriculture Ghulam Mohi-u-Din Rather.

Yousuf has come out with other conclusions as well. “In the early 20th century two exotic species, salmo trutta fario and oncorhynchus mykiss were introduced in the River Jhelum and its tributaries to attract the anglers from world over,” he told IPS. “But the introduction of these species was not based on any scientific study which would have assessed their compatibility with the native species.”

He says that both these trout species got established in the upper reaches of the tributaries in the areas which served as the breeding grounds for the native Schizothorax species.

“The result was the gradual dwindling of the native species as their eggs and young ones became easy prey for the new entrants, both of which are typical carnivorous organisms,” Yousuf said.

He added that the accelerated deforestation over the last few decades and significant quantities of eroded soil entering the upper reaches of the streams caused the loss of native species’ breeding grounds.

“The exotic species did not suffer much on this account as their population in the streams was regularly reinforced by the government agencies by releasing fry and fingerlings raised in the farms. The entry of raw domestic sewage into Kashmir’s water bodies increased the problems for the native species further,” Yousuf said.

Yousuf also cited as a reason for the dwindling fish population the over- extraction of sand and gravel, where the native fish feed and breed.

Ismaeel Dar, a fisherman in Awantipora, told IPS that contractors have been using heavy equipment to extract sand and gravel. “This has snatched our livelihoods from us,” he lamented. “We used to earn 200 to 300 rupees (seven dollars) a day, but now we hardly find any fish to catch.”

The rapid melting of glaciers in spring due to the impact of climate change is also a factor in the decline of native fishes.

“At the time of spawning, during spring season, the streams are generally full of water because of melting of snow and the broods of migrating fish try to go as upstream as possible and lay eggs in shallow areas having sandy or gravelly bottom,” he said.

But the water recedes once the melting stops, causing shallow areas to dry up, Yousuf said. “The fingerlings of the fishes get trapped in pools of leftover water and ultimately get perished after finding no access to the main stream,” Yousuf said.