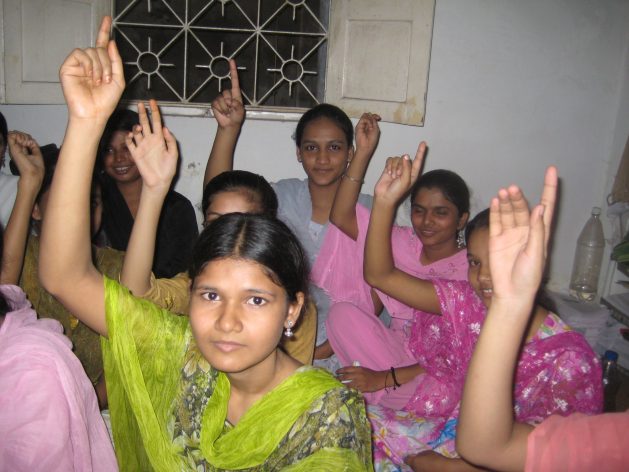 Countries do not have to be economically prosperous to move from high birth and death rates to low fertility and mortality rates. In India as the female literacy rate increased from 39 percent to 65 percent, the fertility rate dropped. These women pictured are studying an IT short course. Credit: Ranjita Biswas/IPS

NEW DELHI, Jul 2 2018 (IPS) - Countries do not have to be economically prosperous to move from a situation of high birth and death rates to low fertility and mortality rates.

Education, social security, environments conducive to economic development and good value systems are what promote this, as evidenced by the recorded experiences of Asian countries as far apart as Japan and India.

According to Dr. Osamu Kusumoto, Secretary-General of the Asian Population Development Association, the economy and demographic transition or DT are indirectly rather than directly correlated.

Demographic transition is the theory that holds that countries move from a situation of high birth and death rates to low fertility and low mortality rates as they industrialise. However, in more recent times, the theory has been hit by contradictions and there are debates over whether industrialisation leads to declining population or whether lower populations lead to industrialisation and higher incomes.

“At the same time the spread of healthcare and public health services promote mortality transition or lowered death rates. But, with real prosperity there is potential for fertility to rise again.”

Thus, according to Kusumoto, in high-income oil-producing countries, DT is unlikely to advance unless the countries also implement modern economic systems.

There are also debates around such inter-related DT issues as higher female incomes, old-age security and the demand for human capital with experiences differing across countries and regions.

As a country transitions, the cost of education rises creating relative poverty and promoting fertility transition, or a lowered birth rate, says Kusumoto. “At the same time the spread of healthcare and public health services promote mortality transition or lowered death rates. But with real prosperity there is potential for fertility to rise again.”

Kusumoto cites the example of Japan where, even with high per-capita incomes, people live in relative poverty and find unaffordable the high cost of educating children. “It is possible to say that fertility declines, even when social security systems are in place and old-age pensions are provided for, because people will make the rational choice of avoiding the cost of having children through marriage and childbirth.”

Japan’s birth rate is 1.44 per woman, which has caused the population to decline by one million in the last five years.

What people in Japan fail to realise, adds Kusumoto, is that without children the social security system becomes unsustainable and cannot support them in old age.

Meanwhile India, a developing country that is home to the world’s second-largest population, the total fertility rate has shown a steady decline from 3.6 per woman in 1991 to 2.4 per woman by 2011. Over that 20-year period per capita incomes rose from 1,221 dollars to 3,755 dollars, going by the United Nations Development Programme (UNDP) figures.

During the same period the female literacy rate increased from 39 percent to 65 percent. Also the composite human development index score of the UNDP, which combines education, health and income, rose from 0.428 in 1990 to 0.609 in 2014.

A closer look at the statistics at the district levels shows curious results such as that in eight Indian states, where there was a drop in the use of modern contraceptive methods, fertility had decreased, according to studies by the International Institute for Population Sciences (IIPS) in Mumbai.

Professor Sanjay Kumar Mohanty at the IIPS says that disaggregated analyses at the district level are important since the districts are the focus of planning and programme implementation in India, including the Sustainable Development Goals (SDGs). “Such analyses may throw light on the unexplained decrease in fertility levels.”

According to an IIPS study published in 2016, while most of India’s 640 districts experience substantial declines over the 1991-2011 period, no clear relationship between initial levels and subsequent changes was discernible.

In the Indian experience, says Mohanty, female education and literacy have been associated with the use of modern contraceptives, higher age at marriage and birth spacing.

According to Kusumoto, in order to achieve the SDGs, what is needed is mortality transition as well as fertility transition. “We need to design a system where young people can have children if they wish to do so.”

Advances in medicine and public health and the availability of healthcare services will inevitably lead to mortality transition, says Kusumoto. “But unless there is also fertility transition, the population will continue to increase beyond the Earth’s carrying capacity.”

While fertility control was successfully promoted using healthcare-based family planning and services, as in the case of India, from the 1960s onwards Western Europe and more recently East Asia began to see fertility rates falling below mortality rates in a “second demographic transition,” Kusumoto says, adding that research is still lacking on why exactly low fertility occurs.

A notable example of the unpredictability showed up in the rapid DT in China’s Sichuan province during a study carried out in the 1980s by Toshio Kuroda, a winner of the U.N. Population Award. Kuroda noticed that DT happened despite the province’s low gross national product, making it an exceptional case of the economic DT theory.

While there is a correlation between the economy and DT there are clear cases where it is not the economy but changes in people’s norms and values that bring about positive transition.

In the end, says Kusumoto, what is important is policies that promote “appropriate fertility transition” and are aimed at building a society in which “human dignity is maintained as envisioned in the SDGs.”