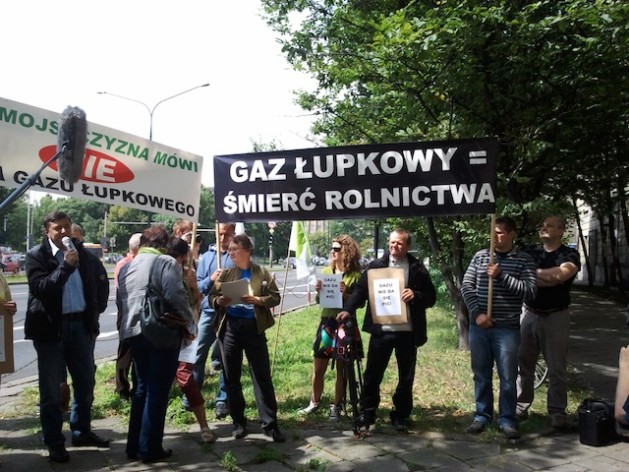 WARSAW, Jul 24 2013 (IPS) - Since Jun. 3, inhabitants of the village Zurawlow in Grabowiec district in southeastern Poland have been occupying a field in their locality where the U.S. company Chevron plans to drill for shale gas. The farmers’ resistance is just the latest blow to shale gas proponents in the country.

Chevron, one of the world’s top five publicly owned oil and gas companies (the so-called “Big Oil”), owns four out of the 108 concessions for exploration for unconventional gas currently awarded by Poland (data from Jul. 1, 2013).

Over the past years, Poland has been perceived as one of Europe’s most promising locations for shale exploration. The U.S. government’s Energy Information Administration estimated two years ago that the country holds 187 trillion cubic feet shale gas resources, 44 trillion of which are in the Lubin Basin where Zurawlow lies. This year, the body revised those estimates downwards, to 148 trillion cubic feet for the country and nine trillion for the Lubin region, after applying tighter methodology.

“If they go ahead with drilling thousands of metres underground, our water will be affected and there will be no more life in our fields." -- villager Stefan Jablonski

Given Poland’s annual gas consumption (currently over 600 billion cubic feet annually), the original EIA estimate has been translated to mean that shale gas resources would be enough to meet the country’s needs for 300 years, a figure often quoted by media and politicians.

The Polish centre-right government headed by Prime Minister Donald Tusk has been depicting shale gas as a way to both reduce Poland’s dependency on Russian gas imports (two-thirds of Polish gas demand is covered from Russian imports) and to make a transition away from dirty coal, which at the moment covers 60 percent of energy demand in the country.

Past the political rhetoric, facts on the ground are less rosy. Despite around 40 wells being drilled in the country since 2010 (including by Halliburton contracted by Polish state company PGNiG S.A.), no company has to date announced that it can extract gas for commercial purposes.

Over the past year, ExxonMobil and two other companies, Marathon Oil and Talisman, announced they would withdraw from Poland, doubting the gains they could make. The government appears to be in damage control mode, telling international media that Exxon still holds on to one out of six concessions and that Marathon has not yet submitted official requests to pull out.

Tusk’s team is also working on legislative changes to make the companies’ lives easier: in addition to tax breaks until 2020, firms would have the possibility to turn exploration licences into production licences automatically as well as to increase the depth of drilling without extra permits.

Yet the shale gas lobby thinks changes do not go far enough. According to the Polish Exploration and Production Industry Organisation (OPPPW), clearer wording is needed to ensure those who explore can automatically exploit (without the fields being put up for tender if gas is discovered), longer exploration permits are necessary, and too big a role is envisaged for a state company which is planned by Poland to have a stake in all exploitations.

“OPPPW members all wish to progress their projects in Poland,” Marcin Zieba, the industry group’s executive director told IPS. “But, as demonstrated by ExxonMobil, Talisman and Marathon stopping their operations. they can change their minds. We have yet to see a project in Poland that has demonstrated commercial flow rates – so this activity remains high risk, with no guarantee of success.”

Meanwhile, local opposition to fracking (pumping water and chemicals into the underground to release gas from rocks) is posing unexpectedly strong obstacles.

In 2012 already, Chevron had to stop operations in Zurawlow because locals successfully argued in courts that the company’s operations at the time were breaching the EU Birds Directive.

The occupation this year started when the company renewed attempts to begin work, beginning with trying to fence off one area. Protesters say that Chevron is treating the concession like private property while according to them “the concession was awarded for public purposes – searching for hydrocarbons – and activities in the area must be conducted with the knowledge and acceptance of society.”

In a controversy that might be telling of the murkiness of the Polish legislative framework, villagers argue that while Chevron has the concession, it has not received supplementary approvals from local authorities to do anything more than seismic testing in the region. Chevron retorts that they do have all necessary approvals.

In a response to protesters, the ministry of environment says the right to build (including wells) on the concession land must be further regulated by state authorities and does not derive automatically from the concession.

The legalistic battle, however, is just a facet of the fundamental conflict between villagers and Chevron: in the predominantly farming area of Zurawlow, people fear fracking will forever destroy their water and lands, endangering their livelihoods.

“If they go ahead with drilling thousands of metres underground, our water will be affected and there will be no more life in our fields,” villager Stefan Jablonski told IPS during a protest in Warsaw last week. “Not to mention that we might end up with no gas and no water too.”

Villagers complain that an assessment of environmental impacts for shale exploration has not been conducted for Zurawlow. According to Polish legislation, state authorities can decide on a case by case basis if such an assessment is required.

Asked to respond to the claims of the protesters by IPS during a press conference Jul. 15, Polish Minister of Environment Marcin Korolec said: “Shale gas constitutes an enormous opportunity for Poland. The majority of environmental issues are extremely emotional, as we see with the people of Zurawlow, but we have to keep our route and realise our policy.”

“Unfortunately, our ministry of environment is behaving like a representative of companies,” Agnieszka Grzybek from the Polish Green Party told IPS. “In the legislative pack discussed at the moment, there is a proposal that says that new NGOs cannot send comments and engage in the debate unless they have existed for more than a year. This would effectively exclude groups like the farmers from Zurawlow from having a say on shale gas.”