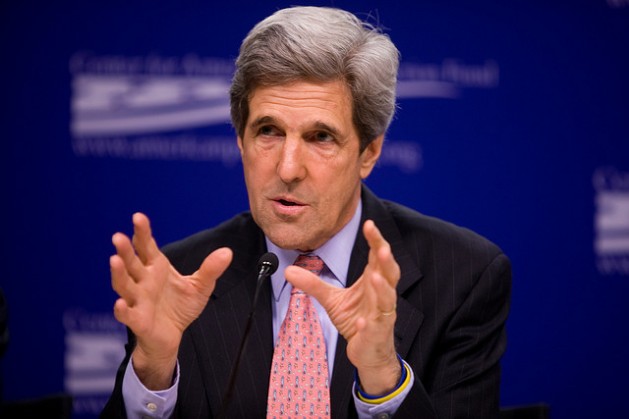 Kerry’s comments came on the heels of Israel, the Palestinians and the United States all making statements and taking actions that seemed to draw a curtain on the latest peacemaking efforts. Ralph Alswang/cc by 2.0

WASHINGTON, Apr 28 2014 (IPS) - In the wake of the collapse of U.S.-led peace talks between Israel and the Palestinian Authority, the angry rhetoric around this conflict has only escalated.

After days of mutual recriminations between Israeli and Palestinian leaders, U.S. Secretary of State John Kerry ignited a controversy by telling a gathering of world leaders at the Trilateral Commission in Washington that Israel is now running the risk of becoming “an apartheid state.”

Kerry was stressing how important a two-state solution is for Israel’s concerns. He was explaining why he believed a one-state outcome of the conflict was not in Israel’s best interests.

He told the gathered leaders that “…a unitary state winds up either being an apartheid state with second class citizens – or it ends up being a state that destroys the capacity of Israel to be a Jewish state.”

After the web site, The Daily Beast, reported Kerry’s statements, some of Israel’s most right-wing supporters were outraged and called for Kerry’s removal from his post.

“It is no longer enough for the White House to clean up after the messes John Kerry has made,” the neoconservative, self-styled Emergency Committee for Israel (ECI) said in a statement. “It is time for John Kerry to step down as Secretary of State, or for President Obama to fire him.”

Other leading supporters of Israeli policies were disturbed by Kerry’s use of “apartheid,” while stopping short of ECI’s call.

David Harris, the executive director of the American Jewish Committee, told the Daily Beast that “the use of the word ‘apartheid’ is not helpful at all. It takes the discussion to an entirely different dimension.”

Palestinians and pro-Palestinian activists have claimed for years that Israel’s occupation of the West Bank and Gaza Strip amounts to an apartheid regime. For many of them, Kerry’s statement is a long-awaited breath of realism, even if it still leaves them wanting more.

“Kerry was stating the obvious,” Professor Rashid Khalidi, the Edward Said Professor of Modern Arab Studies at Columbia University, told IPS. “It would be helpful and entirely healthy if this became a habit for American diplomats.

“They could also say that the unceasing expansion of Israeli settlements is incompatible with a two-state solution, and a clear sign that the Israel government has no intention of allowing a sovereign Palestinian state,” Khalidi continued.

“They could state unambiguously that the Palestinian people have an inalienable right to self-determination, sovereignty and independent statehood in their historic homeland, and that they do not need anyone’s permission in order to seek to exercise these rights. I unfortunately do not expect any such statements in the near future.”

But not all supporters of Palestinian rights see Kerry’s statement in the same way.

Nadia Hijab, senior fellow at the Institute for Palestine Studies, doesn’t view the apartheid issue as a threat to Israel’s future, as Kerry frames it, but rather as an oppressive reality that Palestinians currently experience.

“I see Kerry’s remarks as wholly protective of Israel and unconcerned about the Palestinians,” Hijab told IPS.

“Secretary Kerry, like [Israeli] Justice Minister [Tzipi] Livni and previous Israeli Prime Ministers [Ehud] Olmert and [Ehud] Barak, was reiterating why there’s no such thing as a one-state solution if you believe, as he does, in the principle of a Jewish state,” State Department Spokeswoman Jen Psaki said.

Rebeccca Vilkomerson, executive director of the progressive U.S. group, Jewish Voice for Peace, which is deeply critical of both Israeli and U.S. policies, sees some indication of long-delayed progress in Kerry’s comments.

“That such a high-ranking U.S. official would use the term shows that the Obama administration, and the broader foreign policy community, is losing patience with Israel.  This may be an indicator that we are moving into a new phase of the U.S.-Israel relationship, and that the message of the Boycott, Divestment, and Sanctions movement is having a significant impact.”

“Israel today is not an apartheid state, and that’s not what John Kerry is saying,” J Street President Jeremy Ben-Ami told IPS.

“For over a year now, Kerry has argued that, without a two-state solution, Israel is risking its future and its values as it moves toward permanent rule over millions of Palestinians without equal rights.

“Former prime ministers Ehud Barak and Ehud Olmert have used the ‘apartheid’ term as well to describe this possible future.  Instead of putting energy into attacking Secretary Kerry, those who are upset with the secretary’s use of the term should put their energy into opposing and changing the policies that are leading Israel down this road.”

Kerry’s comments came on the heels of Israel, the Palestinians and the United States all making statements and taking actions that seemed to draw a curtain on the latest peacemaking efforts.

After Israel refused to follow through with a planned release of prisoners, and announced new construction of settlements in the West Bank and East Jerusalem instead, the Palestinians applied to some 15 international treaties and organisations, further angering Israel.

When Israel announced renewed sanctions against the Palestinians, the situation flared up again when the Palestinian Authority and Hamas agreed to move forward with past agreements to reunify their government.

U.S. President Barack Obama declared that it was time for a “pause” in Middle East peacemaking shortly thereafter. This was the situation that Kerry was addressing with his words at the Trilateral Commission.

The Palestinian reconciliation agreement was controversial in itself, as the Israeli government immediately declared that any Palestinian leadership that was associated in any way with Hamas was one Israel would not deal with.

But many believe that Palestinian reunification is necessary if there is to be any real progress, now or in the future, in resolving this conflict.

“I think the reconciliation agreement is more of an acknowledgement from Abbas that the U.S. has utterly failed, yet again, in its efforts and he is embarking on creating a positive legacy before exiting the political theatre,” Palestinian-American businessman and activist Sam Bahour told IPS.

“If the reconciliation reaches the point of elections, it can be a game changer… Anyone serious about resolving this conflict must view the Palestinian people as a single unit, from Ramallah to Santiago, passing through the Galilee, Gaza, Lebanon, Syria and Jordan too. Political agency is of utmost priority today so a sustainable path forward can actually be crafted with some legitimacy.”