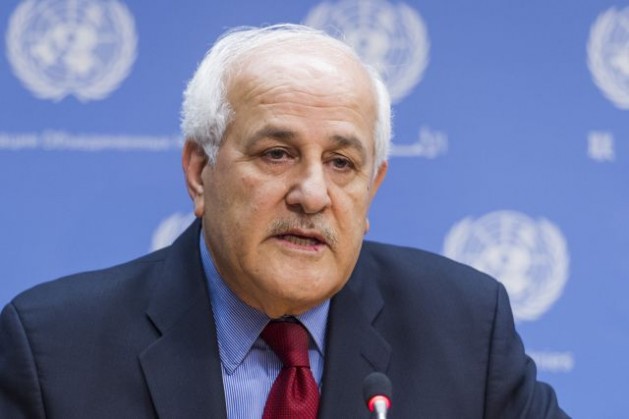 Riyad H. Mansour, Permanent Observer of the State of Palestine to the U.N., briefs journalists Apr. 2 on the signing of international treaties and conventions by Palestinian President Mahmoud Abbas. Credit: UN Photo/Mark Garten

UNITED NATIONS, Apr 7 2014 (IPS) - When Palestinian leader Mahmoud Abbas decided to defy the United States and Israel over stalled peace negotiations, he formally indicated to the United Nations last week that Palestine will join 15 international conventions relating mostly to the protection of human rights and treaties governing conflicts and prisoners of war.

But he held back one of his key bargaining chips that Israel and the United States fear most: becoming a party to the Rome Statute that created the International Criminal Court (ICC) to punish war crimes and genocide – and where Israelis could be docked.

Asked whether it was a wise move, Darryl Li, a post-doctoral research scholar at Columbia University, told IPS, “I would call it a clever move, not necessarily a wise one.”

There’s no question avoidance of ICC was deliberate, that’s clearly a U.S.-Israeli “red line,” he said. So it makes sense as a way to prolong negotiations.

A Flurry of Treaty Signing by Abbas

The United Nations said last week it had received 13 of the 15 letters for accession to international conventions and treaties deposited with the world body.

“But since the current framework for negotiations won’t yield just outcomes due to the Palestinians’ lack of leverage, I wouldn’t call it ‘wise’,” he declared.

And in a blog post for the Middle East Research and Information Project (MERIP) last week, Li underlined the political double standards: “Israel demands that Washington release the convicted spy Jonathan Pollard while the Palestinians are blamed for voluntarily shouldering obligations to respect human rights and the laws of war.”

He said the U.S. administration should press both the Palestinians and the Israelis to better abide by international human rights standards.

In a statement released Monday, HRW said Palestine’s adoption of human rights and laws-of-war treaties would not cause any change in Israel’s international legal obligations.

The U.S. government should support rather than oppose Palestinian actions to join international treaties that promote respect for human rights.

HRW also said that U.S. ambassador to the United Nations Samantha Power last week testified before Congress that in response to the new Palestinian actions, the solemn commitment by the U.S. to stand with Israel “extends to our firm opposition to any and all unilateral [Palestinian] actions in the international arena.”

She said Washington is absolutely adamant that Palestine should not join the ICC because it poses a profound threat to Israel and would be devastating to the peace process.

The rights group pointed out the ratification of The Hague Regulations and Geneva Conventions would strengthen the obligations of Palestinian forces to abide by international rules on armed conflict.

Armed groups in Gaza, which operate outside the authority or effective control of the Palestinian leadership that signed the treaties, have committed war crimes by launching indiscriminate rocket attacks against Israeli population centres, HRW said.

HRW also said Washington appears to oppose Palestine joining human rights treaties in part because it is afraid they will gain greater support for Palestinian statehood outside the framework of negotiations with Israel.

Li said the choice of agreements signed indicated a desire to ruffle feathers but go no further.

Notably, Abbas did not sign the Rome Convention of the ICC, which would have exposed Israeli officials to the possibility, however remote, of prosecution for war crimes and crimes against humanity.

Moreover, Abbas also declined to set into motion membership applications to any of the U.N.’s various specialised agencies, such as the World Health Organisation (WHO) or Food and Agriculture Organisation (FAO).

Such a move would have triggered provisions under U.S. law that automatically cut U.S. funding to those bodies, as occurred when Palestine joined the U.N. Educational, Scientific and Cultural Organisation (UNESCO) in 2011, Li wrote in his blog post.

Meanwhile, the group known as The Elders, which include former world political leaders, said in a statement Monday that the Palestinian move is consistent with the U.N. non-member observer state status obtained by Palestine in November 2012.

This move opens the way to more inclusive and accountable government in the West Bank and Gaza, she added.

It has the potential to strengthen respect for human rights and provide ordinary Palestinians with essential legal protections against discrimination or abuses by their own government, Brundtland noted.

“In global terms, it will also increase their ability to enjoy, in practice, the protection of their basic rights granted to them by international law,” she said.

Former U.S. President Jimmy Carter, also a member of The Elders, said the decision by the Palestinians to exercise their right to join international organisations should not be seen as a blow to peace talks.

“I hope that, on the contrary, it will help to redress the power imbalance between Israelis and Palestinians, as we approach the 29 April deadline set by [U.S. Secretary of State John] Kerry.”

More than ever, he said, both parties urgently need to make the necessary compromises to reach a lasting peace with two states, Israel and Palestine, living side by side in peace and security.