WASHINGTON, Apr 3 2014 (IPS) - With U.S.-mediated Israel-Palestinian peace talks once again dangling over the abyss, a new book has kicked up controversy over the roots of U.S. policy toward Israelis and Palestinians.

In Genesis: Truman, American Jews, and the Origins of the Arab/Israeli Conflict, John Judis, a senior editor at The New Republic, argues that President Harry Truman was more ambivalent about the creation of the state of Israel than is commonly known. 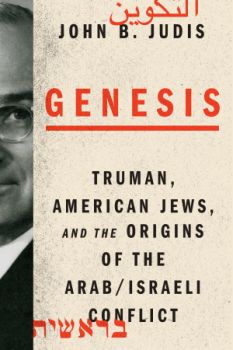 While Truman famously told audiences after he left the presidency that he considered himself a modern-day Cyrus – after the Persian king who freed Jews from Babylonian captivity in the sixth century B.C. – Truman actually preferred a federation of Arabs and Jews to a Jewish-run state and worried about the impact of favouring Zionist claims over Arab ones, according to Judis.

“His preference was for a plan negotiated by American Henry Grady and British official Herbert Morrison that recommended a federated Palestine jointly administered by Arabs and Jews,” Judis writes. “‘Zionist pressure killed the plan,’ ” Judis quotes Truman as saying.

While the plan – as Judis acknowledges – was not very realistic given strong Zionist desire for a Jewish state, the impact of the Holocaust on US and global politics and Britain’s eagerness to shed expensive overseas commitments after World War II, Judis’s depiction of Truman’s concerns have upset some American Jews and others who prefer a less nuanced narrative about the U.S. role in Israel’s origins.

Among those criticising Judis is Leon Wieseltier, a colleague at The New Republic, who in an email to historian Ron Radish that was published by the hawkish Washington Free Beacon accused Judis of being “a tourist in this subject” with a “shallow, derivative, tendentious, imprecise and sometimes risibly inaccurate” understanding of Zionist and Jewish history.

Wieseltier also accuses Judis of insulting Jews, showing “shocking indifference” to their fate after the Holocaust and even being a disciple of communist radical Rosa Luxemburg.

Peter Beinart, a former colleague of Judis’s at The New Republic whose own recent book – “The Crisis of Zionism” – also created quite a stir, wrote in an email that much of the criticism of Judis as “anti-Israel” and anti-Jewish was patently unfair.

“I honestly don’t know what people mean when they say John is ‘anti-Israel,’ ” Beinart wrote. “It’s such an overused and ill-defined phrase. I think what he wants for Israel today is the same thing that most Israelis who care about democracy want: a two state solution, a democratic Jewish state and an end to Israeli control over millions of stateless Palestinians.”

Judis discussed the controversy at an appearance in Washington earlier this week before an audience at the Centre for the National Interest. He said that he had been interested in the subject of how Israel came to be since he edited an essay by Noam Chomsky in 1971 that advocated a two-state solution for Israel and the Palestinians before that was fashionable again.

The Arab side of the debate, Judis said, has been obscured by the events of World War II and the Holocaust and by the fact that the Jews of Eastern and Central Europe had nowhere to go but British Mandate Palestine after the U.S. and other Western countries shut off immigration following World War I.

“If immigration had not been closed off, Israel would have been located somewhere between Silver Spring [Maryland] and Great Neck [New York],” Judis quipped, referring to two suburbs with large numbers of descendents of Jewish immigrants.

Truman, Judis said, had tremendous sympathy for the 50,000 Jewish survivors of the Holocaust who were stuck in displaced persons camps in Europe after World War II. But he was “not a Christian Zionist” like former British Foreign Secretary Arthur James Balfour of the 1917 Balfour Declaration fame or the prime minister at the time, David Lloyd George, or even President Woodrow Wilson.

“He did not have a special attachment to the Jewish people,” Judis said of Truman.

In his book, Judis writes that “Truman’s foreign policy views were grounded in personal morality. He saw the world divided between good guys and bad guys and between underdogs and bullies. He worried about fairness.”

Judis sees the world in shades of grey. Among his more incendiary comments in the book – from the point of view of traditional Zionists — is that “in historical terms, the Zionist claim to Palestine had no more validity than the claim by some radical Islamists to a new caliphate.”

Asked what was new in his account, given other revisionist histories of Israel’s creation primarily by Israeli authors such as Ari Shavit and Benny Morris, Judis said the book would not have caused such a stir if it had been published in Europe or Israel. “What’s new is it is being published in the U.S.…The idea of the two sides of Truman – that’s a different way of doing it.”

While some books attribute Truman’s decision to recognise Israel to his being a Christian Zionist and others say Truman was merely bowing to domestic politics and the power of a Jewish lobby, Truman had “a principled view but at some point got frustrated and gave up,” Judis said.

As for the book’s relevance to the current Mideast impasse, Judis said he hopes to convince more Americans of the legitimacy of the Palestinian case to help U.S. leaders mediate a fair and durable solution to the crisis. “We have to recognise the Arab side better and recognise that they have a real beef,” he said.

“I can’t solve the situation but the book might have a slight effect on changing how people feel about this issue,” Judis said.

Jewish Democrats are increasingly less supportive of the policies of right-wing Israeli governments, Judis said, but “the Republicans are going in the opposite direction.”

He cited the recent furor over comments by New Jersey governor Chris Christie, a possible candidate for president in 2016, referring to the West Bank as “occupied” territory during a speech in Las Vegas in front of wealthy Republican Jews. Christie has since apologised for not using the adjective “disputed.”

U.S. domestic politics have always played a role in Washington’s Middle East policy although some presidents – among them Dwight Eisenhower – were more willing to confront the Jewish state. Judis quotes a famous line by Truman that “I have to answer to hundreds of thousands who are anxious for the success of Zionism; I do not have hundreds of thousands of Arabs among my constituents.”

Even after the U.S. recognised Israel in May 1948, Judis says that Truman pressed for Israel to allow Palestinian refugees to return and to adjust the borders of Israel in a manner more favourable to Arabs.

However, Arab divisions — and the willingness of many Arab states to use the Palestinian cause for their own purposes – have also jeopardised subsequent efforts at peace talks, Judis acknowledges.

“Almost every American president since Truman has tried to find a way to improve the lot of Palestinian Arabs,” Judis writes. “Yet Truman’s successors have, as a rule, suffered the same fate as he did.”