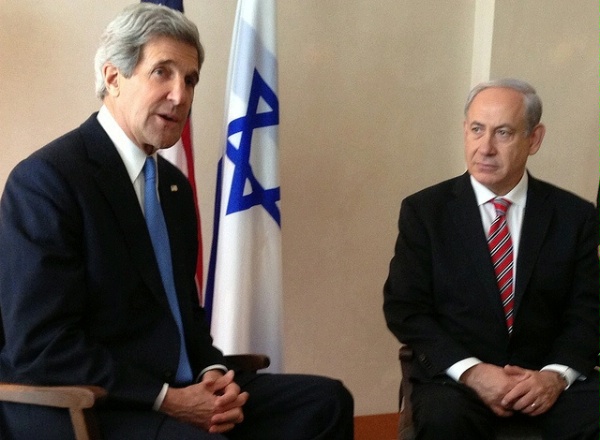 WASHINGTON, Apr 19 2013 (IPS) - Despite repeated pledges of his determination and enthusiasm for resolving the long-stalled Israeli-Palestinian impasse, U.S. Secretary of State John Kerry’s recent trip to the region has provoked more scepticism than hope among observers in Washington.

Speaking in Tel Aviv on Apr. 9, Kerry called his talks with Israeli Prime Minister Benjamin Netanyahu and Palestinian President Mahmoud Abbas “very constructive”, but left with little to show for his efforts.

"Netanyahu is bent on creating a Greater Israel and there is hardly anything the United States can do to stop it." -- John Mearsheimer

Kerry trumpeted commitments from Netanyahu to help bolster the economy in the West Bank, but such efforts appear dimmer in the wake of the resignation of Palestinian Prime Minister Salam Fayyad.

“Economic growth will help us be able to provide a climate… within which people have greater confidence about moving forward,” Kerry told a press conference in Tel Aviv, Israel.

“But I want to emphasise – I emphasise this very strongly: This is not in lieu of, or an alternative to, the political track. It is not a substitute. The political track remains the primary focus. But this is in addition to, in a way that could help to facilitate that track, and I believe will begin to take hold immediately.”

But this positive view was not shared by many long-time observers of the Israeli-Palestinian conflict. It stirred echoes of previous failures with incremental, confidence building measures, and, despite Kerry’s words to the contrary, raised concerns about the efficacy of economic measures without political progress.

Ambassador Philip Wilcox, former U.S. consul general to Jerusalem and current president of the Foundation for Middle East Peace, told IPS that economic measures like the ones Kerry devoted much of his time to in the Middle East are not going to lead to renewed negotiations.

“Small steps like removing checkpoints or allowing more liberalised trade and transit would be welcome but won’t alter Palestinian attitudes very much,” Wilcox said. “Not unless there were a parallel halt in settlement building accompanied with Israeli assurances that such was their policy.”

John Mearsheimer, professor of political science at the University of Chicago and author of the famous book “The Israel Lobby and US Foreign Policy”, believes both Kerry, who served as chair of the Senate Committee on Foreign Relations for four years, and President Barack Obama know there is no hope for a negotiated solution with the current Israeli government.

“It’s hard to believe that either Kerry or President Obama believes that there is any chance of getting a two-state solution,” Mearsheimer told IPS. “They surely know that Netanyahu is bent on creating a Greater Israel and there is hardly anything the United States can do to stop it.

“That makes me think that Kerry was simply going through the motions in his recent trip to the Middle East, so he could get rebuffed and then use that as an excuse to put the Israel-Palestine conflict on the back burner and focus instead on Asia.”

Obama endured steady criticism for his handling of the Israeli-Palestinian conflict throughout his first term in office. He was frequently attacked by political opponents for being insufficiently supportive of Israel, and now is being criticised for not paying enough attention to it.

His first visit to Israel as president was intended to allay these criticisms. Kerry also made trips to the region both before and after Obama’s visit.

But Yousef Munayyer, executive director of the Palestine Center in Washington, remains convinced that Obama does not plan to spend his energy and political capital on this issue.

“The Obama administration has essentially given up on Israel-Palestinian peace,” he told IPS. “They tried – very gently – in the first term to engage and, like administrations before them, failed to do so in an even-handed way. It’s clear that Obama is resigned on this issue. It takes too much political capital domestically and, with other pressing foreign affairs matters around the globe, Palestine is on the backburner.”

Wilcox believes that all of this activity is meant more to address the political attacks than to truly reinvigorate the peace process. In fact, he says, without genuine political progress, even economic improvements may prove elusive.

“The [Obama] administration feels vulnerable to the attack that it’s surrendered and it has to be seen as active and managing a conflict that is not amenable to a solution right now,” Wilcox said. “But even to achieve effective economic measures there is not easy. In the absence of investor confidence of peace in the future, you’re not going to get a lot of investment in the Palestinian economy.”

Munayyer’s belief that “Netanyahu is very happy” with the ongoing stalemate was bolstered by senior Israeli officials who told the Israeli daily, Ha’aretz that, contrary to Kerry’s requests, “”Israel opposes placing the issues of borders and security at the preliminary stage of negotiations, and we said this to Kerry. On this issue, there is full consent among all the ministers dealing with the Palestinian subject.”

Combined with Fayyad’s resignation mere days after Kerry’s visit and economic talks, statements such as these cast serious doubt on Kerry’s positive description of his trip. Even the apparent breakthrough that President Obama ushered in between Israel and Turkey, ending close to three years of diplomatic freeze between the countries, is drawing scepticism.

Wilcox expressed a lack of confidence that the apparent rapprochement would actually solidify. “[Turkish Prime Minister Recep] Erdogan is going to Gaza, and there is no significant change in the [Israeli] closure regime there,” he said.

Turkey has also refused to attend a proposed meeting of NATO’s Mediterranean Dialogue Group due to Israel’s participation. And it has issued a stern warning to Israel not to drag out negotiations over compensation to the families of the Mavi Marmara victims.

The Netanyahu government has not responded to these Turkish actions, despite criticism led by Netanyahu’s own political partner and designated foreign minister, Avigdor Lieberman, who said that the apology to Turkey was a mistake.

This indicates that Israel is willing to try to accommodate the U.S. desire to try to restart talks with the Palestinians and mend the relationship between it and Turkey, at least for the moment. But the thawing of relations remains on shaky ground.