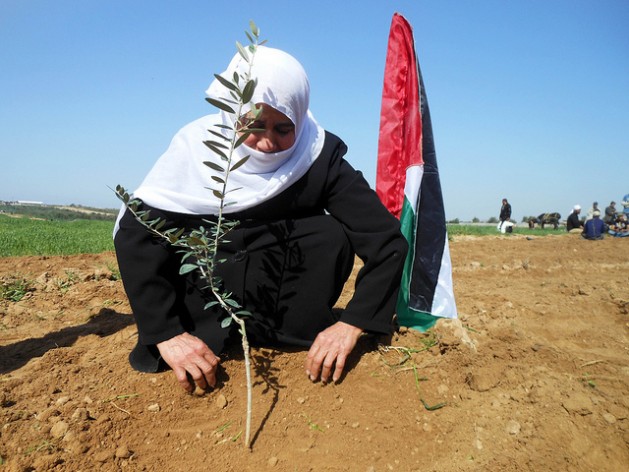 "With all the cynicism and scepticism that has built up on both sides, we are seeing this wave of opposition to anything that is seen as ‘normalisation'." -- Lara Friedman

Lead pollster and President of both Zogby Research Services and the Arab American Institute, Jim Zogby, sees these results as very troubling and as boding ill for the potential for U.S. Secretary of State John Kerry’s efforts to salvage the two-state solution. For Zogby, it comes back to the basic inequality between Israelis and Palestinians and that the process is not framed to accommodate this reality.

“The way the two-state solution has been framed in the dominant narrative, it is defined by Israeli needs, not Palestinian needs,” Zogby told IPS. “If I had added details to the question of a two-state solution such as the 1967 borders [as the basis for territorial negotiations] and a Palestinian capital in East Jerusalem, Israelis would have been less supportive.

“Israelis always poll in favour of negotiations, but are less favourable regarding specific outcomes,” Zogby continued. “Palestinians support outcomes more but support negotiations less because they don’t trust the process. But when you’re in the dominant position, as Israel is, your attitudes are framed by the fact that you’re in control.”

The poll was released just as rumours swirled around Kerry’s efforts, which are expected to produce a framework proposal that Kerry will present to the Israeli and Palestinian leaderships in the next few weeks. While few observers have expressed much hope about the potential for success, Kerry has pressed both sides to work to agree to use his plan as a framework for ongoing talks, despite the reservations they are sure to have.

Whether either or both sides will agree to that remains unclear, however.

Khaled Elgindy, a fellow at the Saban Centre for Middle East Policy, believes the Zogby poll supports Kerry’s view, widely shared, that if current efforts fail, the two-state solution is in serious jeopardy.

“The poll is consistent with my sense that a Palestinian consensus in the West Bank and Gaza Strip around a two-state solution is beginning to collapse,” Elgindy said in Washington, at the presentation of the poll. “On the Israeli side, [this is reflected by] the views of young Israelis being much more antipathetic to a negotiated settlement. Both of those trends do not bode well for a negotiated TS agreement.

“The framework agreement that is being discussed is so vague as not be an agreement. If we are this far into the process and the two-state solution really hangs in the balance, it’s not a time to be vague. I think it’s clear that if we cannot say [there will be] a Palestinian capital in East Jerusalem, if we cannot draw a map instead of talking about percentages of land, if we cannot define these issues, then it’s more of the same because these issues don’t get easier, they get harder.”

The poll showed that, in contrast to Palestinians whose views are generally similar across the generations, younger Israelis have harder line positions than older ones. This is one reason why so many like Elgindy believe that the opportunity for a two-state solution is almost at an end. Zogby believes there are several reasons for this split between younger and older Israelis.

“The other thing is that the dominant narrative in Israel is that they might reflect back and say I was hopeful, that’s not the way the press and dominant media tells the story so it may not be the way that it is viewed. Palestinians may look back and see it in a more positive light. Even though events may not have moved in a more positive direction, the narrative may have been that it was more hopeful. Neither side sees it positively, but there is a difference in how they reflect on it. The youth gap in Israel reflects this because they pick up on how the story is told because they haven’t experienced it directly.”

Lara Friedman, the director of policy and government relations for Americans for Peace Now, agrees. “It isn’t surprising that you have on the Israeli side a growing demographic bump in folks who are ideologically opposed to this,” Friedman said in response to the poll.

“The generation of Israelis who came to the Palestinians in the era of the peace process were much better equipped. We’ve lost those connections in the generation since Oslo. The generation that came to Oslo knew Palestinians. Israelis shopped in Ramallah, there was no separation barrier, and people knew each other. It’s very different today. With all the cynicism and scepticism that has built up on both sides, we are seeing this wave of opposition to anything that is seen as ‘normalisation.’”

Both Israeli Prime Minister Benjamin Netanyahu and Palestinian President Mahmoud Abbas have stated that they would put any agreement to a referendum among their respective peoples. When asked if they held out hope, only 11 percent of Palestinians and 39 percent of Israelis said they did.

Those results seem to imply that Friedman was correct when she said, “I believe that when there is a deal and people are presented with the possibility of ending this…I think opinions shift very quickly.”

But Kerry’s proposed framework would only map out future discussions. Palestinians have been insistent that they have had enough of endless discussions with no change on the ground aside from the ever-expanding Israeli settlements.

That is why Friedman, an ardent supporter of the two-state solution, also says that “…many of us believe that we need to get to a deal and do it. Leaving more time, constructive ambiguity and ‘confidence-building’ was the death of confidence [between the two sides]. Confidence can be built after the divorce — that is the lesson of the last 20 years.”

But it doesn’t seem that getting to a deal quickly is Kerry’s intent in the short term. And it certainly seems like time has just about run out.