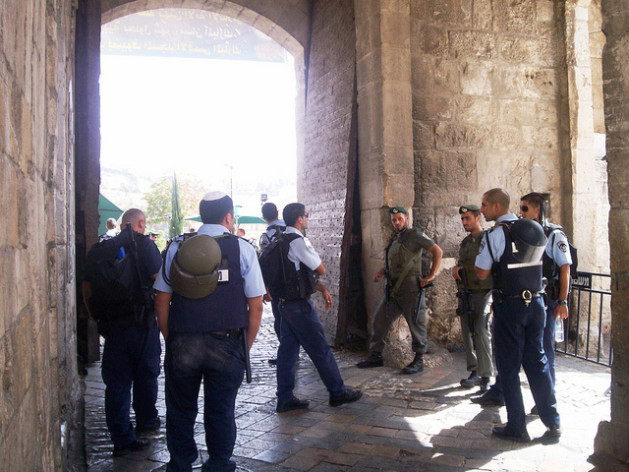 WASHINGTON, Apr 30 2013 (IPS) - Despite indications that U.S. Secretary of State John Kerry is committing a substantial amount of time and effort to revive the long-stalled Israel-Palestinian “peace process”, a growing number of experts believe a two-state solution is no longer viable and the lack of a realistic discussion of the issue in the United States is leaving the country without an alternative policy.

In the two months since confirmation in his post, Kerry has made three trips to the region. On Monday, he hosted an Arab League delegation, including the League’s secretary general, the Qatari prime minister and representatives from the Palestinian Authority, Saudi Arabia, Bahrain, Egypt, and Lebanon.

"Obama’s failure makes it clear that the U.S. will never be an honest broker." -- Harvard's Stephen Walt

The meeting was aimed at renewing the long-dormant Arab Peace Initiative (API), which promises full normalisation of relations between Israel and all Arab League member states in exchange for Israeli withdrawal from the territories it occupied in 1967 and a “just resolution” of the Palestinian refugee issue.

Kerry hopes that the API can serve to get Israeli-Palestinian negotiations back on track.

But those efforts may yet be for naught, according to analysts, some of whom have long championed the two-state solution but who now believe that a combination of U.S. fecklessness and Israel’s establishment of “facts on the ground” in the predominantly Palestinian West Bank have made such a settlement impossible.

“The U.S. public has bought a narrative that is totally dishonest and misrepresents the obvious facts – and what can be more obvious that there can be no peace process if you simultaneously steal the land in question,” Henry Siegman, former national director of the now-defunct American Jewish Congress and current senior fellow at the Council on Foreign Relations and president of the US/Middle East Project, said at a recent talk hosted by the Middle East Institute in the halls of the U.S. House of Representatives.

“But the reason the U.S. public is overwhelmingly supportive of the Israeli position is that it is uninformed on geography and world affairs… So it is not surprising that the public accepts a narrative that is totally unrelated to facts on the ground,” he said.

The effect of that distorted narrative is to cripple the United States’ ability to act as an honest broker in this conflict, Siegman said.

“It was always assumed that the United States’ great friendship and support for Israel meant at some point it would say ‘enough’ because if you cross this line, we can no longer invoke our common values – apartheid is not a common value. But the other reason for our failures is that presidents and Congress have never had the courage to act on that reality.”

Philip Weiss, editor of the anti-Zionist web site, Mondoweiss, clarified the reason for that inactivity, and contended that the key place to try and change things is within the U.S. Jewish community.

“The U.S. has allowed this to happen despite knowing Israeli ambitions (to control all of the West Bank) due to the Israel Lobby,” Weiss said. “The Lobby draws its strength from the U.S. Jewish community’s commitment to Zionism… Zionism was once a valid response to the rise of anti-Semitism in Europe. But the need for Israel to be a Jewish state leads inevitably to the excesses of occupation.”

Professor Stephen Walt of the Kennedy School of Government at Harvard University, and co-author of the controversial book, “The Israel Lobby and US Foreign Policy”, identified the United States as a major reason for the current impasse.

“Many believe it is now impossible, due to settlements, the Israeli drift to right and the split [between Fatah and Hamas] among the Palestinians.

“[President Barack] Obama’s failure makes it clear that the U.S. will never be honest broker…That’s why we need alternatives. People will want to know what the U.S. is in favour of instead.”

The “failures” Walt spoke of are not limited to Obama’s first term. Despite a well-received speech during Obama’s first presidential visit to Jerusalem as well as two trips to Israel by Kerry, the divide between Israel and the Palestinians seems more entrenched than ever.

Reports from Israel after Kerry’s visit earlier this month indicated that the government of Israeli Prime Minister Benjamin Netanyahu rejected Kerry’s formula for dealing with borders and security first as a way to restart talks with the Palestinians.

This cannot be surprising, as Netanyahu’s own party, Likud, as well as two of his three major coalition partners, the Israel Beiteinu and The Jewish Home parties, are strong supporters of the settlement franchise.

Kerry’s strategy to encourage progress through Palestinian economic growth was deeply undermined by the resignation of Palestinian Prime Minister Salam Fayyad just after that same visit.

While Kerry insisted that his economic initiative was not meant to replace a political peace process, Palestinian President Mahmoud Abbas insisted on focusing on the political issues such as Israeli settlements and the fates of Palestinian prisoners in Israel.

Even Kerry’s attempt to build on the progress Obama made in rekindling diplomacy between Israel and Turkey by asking Turkish Prime Minister Recip Erdogan to postpone a planned trip to Gaza was met with refusal and a sharp rebuke of Kerry from Turkey.

All of this suggests that there is no hope on the immediate horizon. Secretary Kerry testified before a Senate subcommittee recently and said there was a window of only one to two years for the two-state solution, and given the lack of opportunity now, this is strong evidence for the position that the path to two states is indeed closed.

In a clear signal of the international community’s frustration with the U.S.’s failure to find any progress in the conflict, a recent letter signed by 19 former European prime ministers, presidents and foreign ministers urges European Union Foreign Affairs Representative Catherine Ashton to take immediate action to save the two-state solution.

“European leaders cannot wait forever for action from the United States,” the letter says, while advocating a clear EU statement that all Israeli settlements beyond the 1967 borders are illegal and calling for stronger efforts to unify the divided Palestinian leadership, among other measures.