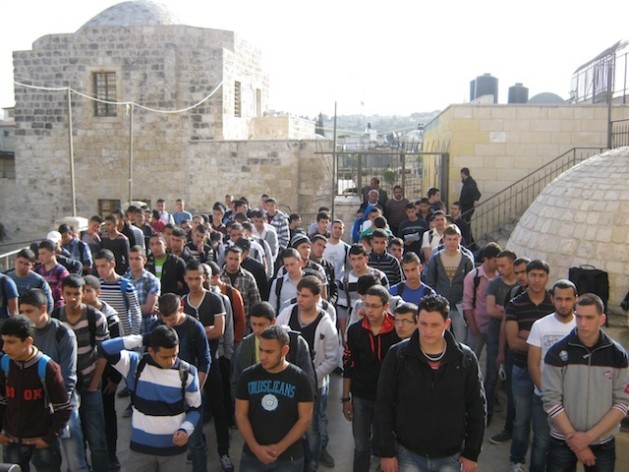 Palestinian youth in the Old City of Jerusalem are taught a different version of historic events than their Israeli counterparts. Credit: Pierre Klochendler/IPS

Simultaneously, Israeli sixth graders from the Eshkol communal villages adjacent to the border with Gaza are in Tel Aviv on a tour of Independence Hall, a national shrine where, on May 14, 1948, Prime Minister David Ben-Gurion read the declaration of independence of the state of Israel.

“The U.N. voted for the Partition Plan but because the Arabs didn’t accept it, the plan didn’t materialise and, the following day, the Independence War broke out,” declaims Israeli guide Lili Ben-Yehuda to the children.

Back in the Islamic school in Jerusalem, history teacher Iyad el-Malki tells his class, “The Jews wanted two states — the Palestinian state and the Israeli state. Didn’t they take over the West Bank twenty years later, in 1967, and settle on our land?” he asks his class rhetorically.

"Textbooks play a crucial role in educating children and forging their ideology as adults"
On Nov. 29, 1947, the United Nations General Assembly voted in favour of the termination of the British Mandate of Palestine and for the partition of the land into two independent states – one Jewish, one Arab.

For Israelis, the vote portended the creation of their state six months later; for Palestinians it meant the “Nakba”, meaning catastrophe, when the Palestinians went from being a majority on their land to a minority in what would become Israel.

Observing how two classes – one Israeli, one Palestinian – are taught an elemental moment of their common history proves that “historical events, while not false or fabricated, are selectively presented to reinforce each community’s national narrative”, says a recently published study on Palestinian and Israeli textbooks.

Entitled “Victims of Our Own Narratives? Portrayal of the ‘other’ in Israeli and Palestinian schoolbooks”, the study found, “Both sides are locked into self-national narratives inherited from the conflict.”

“Each side negatively pigeonholes the other,” Sami Adwan, associate professor of education at Bethlehem University and co-author of the study, told IPS. “And both fail to include information about the other’s culture, religion, daily life.”

And it will continue to evade the map while textbooks, which “play a crucial role in educating children and forging their ideology as adults”, according to Adwan, do not acknowledge the existence of the “other”.

Analysing more than 3,000 texts in 94 Palestinian and 74 Israeli books over a period of three years (2009-2012), the study identified maps as vivid evidence of each side’s attempt to erase borders and, thus, historic claims.

“Children grow up on both sides with the representation that the area between the Jordan River and the Mediterranean Sea is really their homeland,” Daniel Bar-Tal, professor of research in child development and education at Tel Aviv University and the study’s co-author, told IPS.

And whereas schoolbooks “consistently describe the other community as acting to destroy or dominate its own community, it depicts its own actions as peaceful and acting in self-defence”, explains the study.

Educational systems on both sides are different.

In existence since 1948, the Israeli system is heterogeneous, comprised of secular and religious state schools, and of unaffiliated ultra-orthodox schools. All use different textbooks.

Created in the early 2000s, the nascent Palestinian system is more homogenous, with pupils learning the same textbooks.

For Adwan, textbooks reflect the reality experienced by both people: “Israelis see the Palestinians as only waiting for the opportunity to attack them. Still under occupation, Palestinians see their land being taken away from them,” he says.

The study also compared teachings referring to glorification of martyrdom and self-sacrifice.

Palestinian sixth graders can read in a language book, “Death before submission, forward!” — an injunction reminiscent, Israeli critics say, of past suicide bombings.

Israeli second graders, on the other hand, are taught the story of Joseph Trumpeldor, an early Zionist whose last words while defending a Jewish settlement against Arab attackers reportedly were: “It’s good to die for our country.”

During the Oslo peace years, as Israelis and Palestinians were cautiously reaching out towards each other, Bar-Tal was in charge of preparing Israeli state textbooks for a new peace age.

For him, “The purpose of national narratives is first to mobilise people, prepare them to fight for the cause.”

But they can also, equally, be used to prepare people for peace.

In the 1990s, Israel started to come to terms with the issue of Palestinian refugees. For the first time, textbooks acknowledged that Palestinians did not choose to flee during Israel’s war of independence but were, in many instances, forced to do so.

In 2007, Yuli Tamir, a liberal education minister, introduced the term “Nakba”, which refers to the forced Palestinian exodus, into Israeli Arabic-language textbooks destined for Israeli pupils of Palestinian descent.

Two years later, the ‘N’ word was expunged; Prime Minister Benjamin Netanyahu then justified the decision by saying that the term was “propaganda against Israel”.

Against this backdrop, the study appears to have deep implications for peace-building, suggesting that the textbooks made up by adults are not yet engaged in preparing children for an ethos of peace.

As a result, the research report is emerging as a microcosm of the conflict and its divergent narratives, with Israeli government officials who have long criticised the content of Palestinian textbooks rejecting the study’s findings altogether.

“Our children are taught to love peace; theirs to hate us,” Yossi Kuperwasser, director-general of Israel’s Strategic Affairs Ministry and a former senior military intelligence officer who monitors Palestinian statements deemed “inflammatory” by Israel, tells IPS.

Even before the study’s publication last month, Israel’s Ministry of Education issued a pre-emptive statement dismissing the research as “biased, unprofessional and significantly lacking in objectivity” and the findings as “predetermined”.

“It’s not an academic study,” accuses Kuperwasser, “but rather, a political report used for besmirching Israel and its education system.”

The Palestinian Authority, on the other hand, has expressed “openness” to the findings, according to Adwan.

Though he would “like to see textbooks present the other side in a more human perspective” Adwan believes “daily reality must also reflect that move”.

Tens of Israeli children visit the shrine of statehood each day, re-enacting the historic moment of their state’s declaration of independence.

Meanwhile within the walls of the Old City where the Islamic orphanage and secondary school holds classes, Palestinian students sing their national anthem, most without much anticipation, as if statehood for them was a forlorn dream.