By James A. Russell Reprint | | 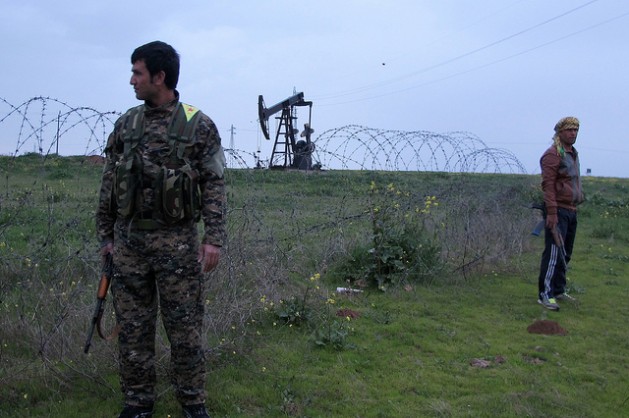 Some argue that the conflicts in Syria, the Congo and Libya are part of a more general slide into a Hobbesian, or failed state, the kind of world in which the weak perish and the strong survive. Credit: Karlos Zurutuza/IPS

WASHINGTON, Mar 21 2014 (IPS) - Russia’s storming of the Ukrainian naval base in Crimea just as Iran and world powers wrapped up another round of negotiations in Vienna earlier this week represent seemingly contradictory bookends to a world that some believe is spinning out of control.

It’s hard not to argue that the world seems a bit trigger-happy these days.

The chaos in places like Syria, the Congo, Libya, and Afghanistan has actually been the norm of international politics over much of the last century - not the exception.

Vladimir Putin’s Russian mafia thugs armed with weapons bought with oil money calmly annex the Crimea. Chinese warships ominously circle obscure shoals in the Western Pacific as Japan and other countries look on nervously. Israel and Hezbollah appear eager to settle scores and start another war in Lebanon. Syria and Libya continue their descent into a medieval-like state of nature as the world looks on not quite knowing what to do.

Noted U.S. foreign policy experts like Senator John McCain, Lindsey Graham and Condoleezza Rice have greeted these developments with howls of protest and with a call to arms to reassert the United States’ global leadership to tame the anarchic (and anti-U.S.) world.

They appear to believe that we should somehow use force or the threat of force as an instrument to restore order. Never mind that these commentators have exercised uniformly bad judgment on nearly all the major foreign policy issues of the last decade.

The protests of these commentators notwithstanding, however, it is worth discussing what all these events really mean; whether they are somehow linked and perhaps suggest a structural shift in international politics towards a more warlike system.

For the United States, these developments come as the Obama administration sensibly tries to take the country’s military off a permanent war-footing and slow the growth in the defence budget — a budget that will still see the United States spend more on its military than most of the rest of the world combined.

The first issue is whether the events in Crimea are emblematic of a global system in which developed states may reconsider the basic calculus that going to war with each other doesn’t pay.

Vladimir Putin may have correctly calculated that the West doesn’t care enough about Crimea to militarily stop Russia, but would the same calculus apply if he tried to seize Moldova, Poland, or some part of Eastern Europe?

Similarly, would the Central Committee in Beijing risk a wider war in the Pacific over the bits of rocks in the South China Sea that are claimed by various countries?

While we can’t know the answer to these questions, the political leadership of both Russia and China clearly would face significant political, economic, and military costs in choosing to exercise force in a dispute in which the world’s developed states could not or would not back down.

These considerations remain a powerful deterrent to a resumption of war between the developed states, events in Crimea notwithstanding – although miscalculations by foolhardy leaders like Putin are always a possibility.

The second kind of inter-state dispute are those between countries/actors that have deep-seated, historic disputes.

Clearly, the most dangerous of these situations is the relationship between India and Pakistan — two nuclear-armed states that have been exchanging fire directly  and indirectly for much of the last half century.

Similarly, the situation in the Middle East stemming from Israel’s still unfinished wars of independence remains a constant source of regional instability.

Maybe one day, Israel and its neighbours will finally decide on a set of agreeable borders, but until they do we can all expect them to resort to occasional violence until the issue is settled.

Try as we might, there’s not much the international community can do about these enduring disputes until the parties themselves seek peaceful solutions that address their grievances.

The third kind of war is like those in Syria, the Congo, and Libya that some argue is part of a more general slide into a Hobbesian, or failed state, kind of world in which the weak perish and the strong survive.

Here again, however, we have to wonder what if anything is new with these wars. As much as we might not like it, internal political evolution in developing states usually entails violence until winners in the contests for political authority emerge.

The West’s own evolution in Europe took hundreds of years of bloodshed until established political systems took shape that settled disputes peacefully.

The chaos in places like Syria, the Congo, Libya, and Afghanistan has actually been the norm of international politics over much of the last century – not the exception.

This returns us to the other bookend cited at the outset of this piece — the reconvened negotiations in Vienna between Iran and the international community.

These meetings point to perhaps the most significant change in the international system over the last century in which global institutions have emerged as mechanisms to control state behaviour through an incentive structure that discourages war and encourages generally accepted behavioural norms.

These institutions, such as the United Nations, and its supporting regulatory structures like the International Atomic Energy Agency, have helped establish new behavioural norms that impose serious costs on states that do not observe the rules.

That same set of global institutions and regulatory regimes supported by the United States will almost certainly enact sanctions that will impose significant costs on Russia as a result of its illegal seizure of the Crimea.

Those costs will build up over time, just as they have for Iran and other states like North Korea that find themselves outside of the general global political and economic system.

Russia will discover the same lesson learned by Iran – it’s an expensive and arguably unsustainable proposition to be the object of international obloquy.

For those arguing for a more militarised U.S. response to these disparate events, it’s worth returning to George F. Kennan’s basic argument for a patient, defensive global posture.

Kennan argued that inherent U.S. and Western strength would see it through the Cold War and triumph over its weaker foes in Moscow.

As Kennan correctly noted: we were strong, they were weaker. Time was on our side, not theirs.

The same holds true today. Putin’s Russia is a paper tiger that is awash in oil money but with huge structural problems.

Russia’s corrupt, mafia-like dictatorship will weaken over time as it is excluded from the system of global political and economic interaction.

The world’s networked political and economic institutions only reinforce the strength of the West and those other members of the international community that choose to play by the accepted rules for peaceful global interaction.

In places like Syria, we need to recognise that these wars are part of the durable disorder of global politics that cannot necessarily be managed by us or anyone else despite the awful plight of the poor innocent civilians and children – who always bear the ultimate costs of these tragic conflicts.

We need to calm down and recognise that the international system is not becoming unglued; it is simply exhibiting immutable characteristics that have been with us for much of recorded history.

We should, however, be more confident of the ability of the system (with U.S. leadership) to police itself and avoid rash decisions that will only make these situations worse.

James A. Russell is an Associate Professor in the Department of National Security Affairs at the Naval Postgraduate School in Monterey, CA, where he is teaching courses on Middle East security affairs, nuclear proliferation, terrorism, and national security strategy.