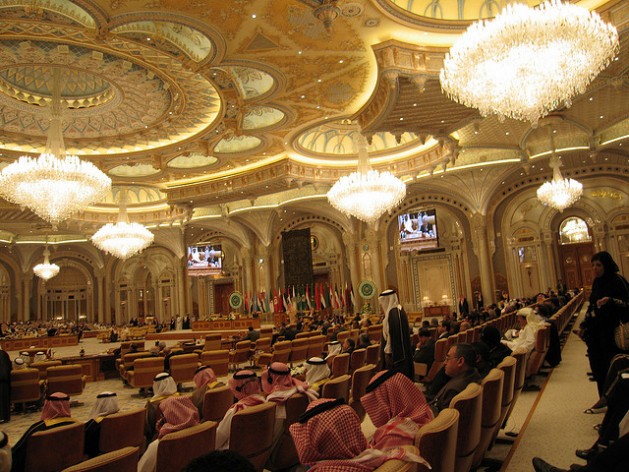 Saudi Arabia is now the world's fifth largest arms importer, moving up from the 18th largest in 2004-2008. Credit: Radio Nederland Wereldomroep/cc by 2.0

UNITED NATIONS, Mar 17 2014 (IPS) - The Middle East continues to be one of the world’s most lucrative arms markets, with two Gulf nations – Saudi Arabia and the United Arab Emirates (UAE) – taking the lead, according to a new study released Monday by the Stockholm International Peace Research Institute (SIPRI).

"The Gulf is the Eldorado for Western arms merchants and governments that want to recycle some of the wealth generated from oil." -- Toby C. Jones

The United States accounted for 42 percent of total arms supplies to the region, SIPRI said.

“I definitely think it is a mixture of all of those factors,” said Nicole Auger, a military analyst covering Middle East/Africa at Forecast International, a U.S.-based defence market research firm.

The Middle East defence market, she told IPS, is growing substantially as a result of civil unrest, international instability – especially between Iran and Gulf States – and higher oil prices.

Toby C. Jones, an associate history professor at Rutgers University, told IPS, “The Gulf is the Eldorado for Western arms merchants and governments that want to recycle some of the wealth generated from oil.”

There is no collection of states on the planet with more money and more enthusiasm for purchasing expensive weapons systems than in the Gulf, he pointed out.

Whatever strategic value these weapons have or do not have, it is important to keep in mind these weapons are mostly useless for “actual” war, which is why the United States continues to keep such a huge military presence in the region, he added.

“There is almost literally nothing else states could possibly buy that allow for recycling some of the Gulf’s cash,” he said.

Iran, which is barred from importing most types of major arms due to U.N. sanctions, received only one percent of the region’s arms imports in 2009-2013, according to SIPRI.

During the same period, the UAE was ranked the world’s fourth largest arms importer and Saudi Arabia the fifth largest (having been the 18th largest in 2004-2008).

Auger told IPS, “I would pin Iran as the number one driver: its ongoing role in supporting rebel Shiite groups, cultivating political-military proxy allies in Hamas and Hezbollah and more recently its effort to keep Syria’s Bashar al-Assad in power.”

The Middle East’s major interest right now in upgrading or purchasing missile defence networks is almost all in preparation to defend against long-range attacks from Iran.

Also, Iran appears to be the major reason behind the GCC (Gulf Cooperation Council) trying again to form the U.S.-backed joint military command, she added.

These GCC countries include Oman, Bahrain, Kuwait, Saudi Arabia, Qatar and the UAE.

Auger said internal security would be a close second following the 2011 uprisings, the ongoing unrest in certain nations and the continuing threat of established and emerging Islamic fundamentalist groups.

“This is evident due to the new focus on special operations, electronic surveillance, and cybersecurity equipment,” she said.

The influx of revenue among the energy-exporting nations and the high oil price trend obviously plays a part as well, she added.

Last year’s 10.5-billion-dollar arms deal, one of the largest in the Middle East in recent years, included the sale of 26 F-16 fighter planes to UAE and sophisticated air-launched and air-to-ground missiles to Saudi Arabia.

These missiles were mostly to arm 154 F-15 fighter planes, to be delivered beginning 2015, purchased from the United States in 2010 at a staggering cost of 29.5 billion dollars.

The missiles were meant “to address the threat posed by Iran”, according to a senior U.S. official quoted in a news report.

But despite the sale of these weapons to Middle Eastern nations, the United States has always maintained it will continue to “guarantee Israel’s qualitative military edge” over Arab nations.

Jones told IPS the Arab Gulf states are politically vulnerable at home and the last three years have been particularly contentious.

While the region has not seen the kind of unrest that shook other parts of the Middle East, except for Bahrain and Kuwait, the regimes in Riyadh and elsewhere are anxious about the possibility there could be a rise in revolutionary fervour.

“They always have been, but these anxieties are more acute in this particular moment. So buying lots of weapons is often connected to domestic policing and counter-revolutionary concerns,” he said.

These weapons will likely never be used in a serious way in a regional conflict, he added.

Jones pointed out the purchasing of weapons, especially long range and complex weapons systems, has little to do with these states’ interest in going to war with Iran or even defending against it. “They have the United States for that,” he said.

But, in buying weapons like these, Gulf regimes claim they are also looking after U.S. energy concerns in a tough neighbourhood.

“These are specious claims, designed to reinforce American anxieties about dangers in the region in order to keep the U.S. military there,” Jones said.

The Arab states need “crisis” to be a permanent condition in order to maximise the West’s and especially Washington’s security commitment – whether crisis is real or not, he added.