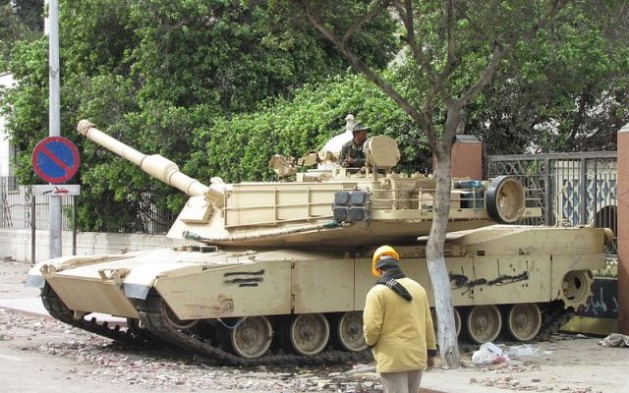 UNITED NATIONS, Aug 16 2013 (IPS) - The United States, which has refused to cut off its hefty 1.3 billion dollars in annual military aid to Egypt, continues to argue that depriving arms to the 438,500-strong security forces will only “destabilise” the crisis-ridden country.

There is perhaps a more significant – but undisclosed – reason for sustaining military aid flows to Egypt: protecting U.S. defence contractors.

Virtually all – or an overwhelming proportion – of the 1.3 billion dollars granted under Foreign Military Financing (FMF) is plowed back into the U.S. economy, specifically into the U.S. defence industry.

Dr. Paul Sullivan, a professor of economics at National Defence University, recounts the days when he used to "walk my then babies and young children all over Cairo and the countryside with no fear and lots of friendliness and warmth from the people of Egypt not so many years ago. No longer. Poor Egypt."

Asked about the current crisis, Dr Sullivan, who is also an adjunct professor of Security Studies at Georgetown University, told IPS he sees things differently.

"The military aid to Egypt is directly tied to the (1978) Camp David Accords. Also, many Egyptians are employed by the military and gain skills from the Egyptian military. The U.S. also trains many in the Egyptian military in the building and maintenance of the equipment. The M1A1 Abrams tank is in many ways a joint venture between the two militaries. The equipment and training stay in Egypt. The U.S. and Egypt need each other for security, economic, sea lane protection and other issues. Egypt is a vital country also for overflights of aircraft and Suez Canal pass-throughs for U.S. ships.

"The Christians are being attacked by the Muslim Brotherhood. The Brotherhood people are attacking government buildings. The Brotherhood has a lot less support in Egypt than many people outside of Egypt think. Their support has been vaporising since the start of the ill-fated and pretty much failed Morsi regime.

"More than 15 million Egyptians came out to ask Morsi to leave. If this happened in the U.S., England and most anywhere else, the leadership would either resign or be asked to resign or be in impeachment proceedings. I call what happened [in Egypt] a revo-coup. The people had their revolution. Millions spoke. Why is it that people are not writing about that?

William Hartung, director of the Arms and Security Project at the Centre for International Policy (CIP), told IPS U.S. President Barack Obama’s refusal to cut-off military aid to Egypt while U.S. weapons are being used to murder protesters is “unconscionable”.

“The reasons given for continuing this aid no longer hold up to scrutiny. It is not a source of stability, as the Obama administration claims,” he said.

And it has certainly not given the United States any leverage to moderate the behaviour of the regime, said Hartung, who has written extensively on the politics and economics of the U.S. defence industry.

“One thing the aid has done and continues to do is to enrich U.S. defence contractors like Lockheed and General Dynamics,” he added.

With the exception of a tank factory built with U.S. assistance, he pointed out, the vast bulk of the roughly 40 billion dollars in U.S. military aid to Egypt over the past 30 years has gone straight into the coffers of U.S. weapons makers.

All of these weapons have either been delivered – or are in the process of being delivered – by some of the major U.S. defence contractors, including Lockheed Martin, Northrop Grumman, General Electric, Boeing, Sikorsky, General Dynamics, United Defence and Raytheon, among others.

The U.S. defence contractor General Dynamics is involved in helping Egypt co-produce the M1A1 Abrams battle tank, described as “one of the cornerstones of U.S. military assistance to Egypt”.

Additionally, there is an ongoing programme to continue upgrading equipment in the Egyptian arsenal and follow-on support and maintenance contracts for the upkeep of U.S. equipment.

In a piece published in Common Dreams online, Jacob Chamberlain, a staff writer, quotes a report from National Public Radio (NPR) as saying that every year, the U.S. Congress appropriates more than one billion dollars in military aid to Egypt.

“But that money never gets to Egypt. It goes to the Federal Reserve Bank of New York, then to a trust fund at the Treasury and, finally, out to U.S. military contractors that make the tanks and fighter jets that ultimately get sent to Egypt.”

So far, the Obama administration has penalised Egypt by suspending the delivery of four F-16 fighter planes (the Egyptian air force already has 143 F-16s, with the last order of 20 dating back to March 2010 still in the pipeline) and the cancellation of joint military exercises with Egypt scheduled for September.

The Obama administration has also refused to describe the military takeover of a civilian government as a “coup” because under U.S. legislation such a designation would automatically generate a cut off of U.S. aid.

As of Friday, the death toll from the military crackdown has been estimated at between 500 and 1,000, with nearly 4,000 injured.

Pieter Wezeman, a senior researcher with the Arms Transfers Programme at the Stockholm International Peace Research Institute (SIPRI), told IPS, “It is correct that the U.S. military industry benefits from U.S. military aid to Egypt.

“And it is correct that if the United States would stop altogether with supplying such aid to Egypt, that would have some effect on the turnover of the U.S. arms industry,” he added.

However, he said, “I am doubtful if arms industry lobbying [or] concern for the arms industry is a reason of any significance for the U.S. to not halt all FMF aid to Egypt.”

There are several reasons, he said, including a temporary stop which would have only a minor effect.

“After all, some of the equipment that has been contracted for can be produced and stored by the U.S. government – which is, after all, the entity that signed the contracts with the U.S. industry – until the situation in Egypt changes.”

Presumably, funding not earmarked can be withheld and would benefit the industry later, he added.

Moreover, said Wezeman, the U.S. has embargoed major buyers of U.S. arms and cut military aid before, despite the obvious costs for the industry.

The best examples are Iran in 1979 – although that was arguably as well a decision by Iran at that time – Pakistan in early 1990s and India in 1963.

Citing other examples, he said, in the case of Saudi Arabia and the United Arab Emirates (UAE), the U.S. has foregone some major deals due to the fact they did want to supply certain advanced equipment. For example, it is generally assumed that France clinched a major deal for combat aircraft in the late 1990s because it included 300 km range cruise missiles which the U.S. had refused.

Military aid to countries like Greece has diminished from high in the 1980 and ’90s to a very low level now.

Wezeman said although 1.3 billion dollars a year is a lot of money, it is relatively small compared to the current cutbacks in U.S. military spending and the sequestration issue, which will have a much bigger effect on the U.S. arms industry.