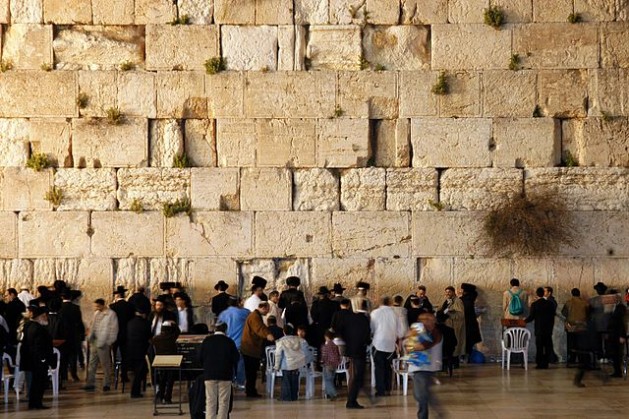 Western wall in Jerusalem at night. Credit: Wayne McLean/cc by 2.0

UNITED NATIONS, Aug 19 2015 (IPS) - The writing on the Western Wall is evident to most Israelis: “דמוגרפיה היא גורל” or “demography is destiny”. Those unwilling to acknowledge the prophetic message are either deceiving themselves or simply ignoring it in order to avoid facing the implications of demography for Israel’s future.

In order to be both a Jewish and democratic state, Israel has adhered to a clear demographic principle:  maintain an overwhelming Jewish majority. During the first few decades following its establishment in 1948, the proportions Jewish among the several million Israelis remained at record highs of nearly 90 percent (Figure 1).

In the immediate aftermath of the two-state solution’s formal demise, Israel will try to avoid facing demographic realities and maintain an untenable status quo.

Since then, even with the large-scale Jewish immigration from the former Soviet Union in the 1990s, the Jewish proportion in Israel, while still a sizeable majority, has declined steadily. Today the proportion Jewish among the Israeli population of more than eight million is at an historic low of 75 percent.

Although the country’s Jewish majority will likely continue to decline slightly over the next 20 years, it is expected to remain over 70 percent according to official Israeli population projections. Those projections, however, assume that no significant numbers of non-Jews outside pre-1967 Israel are granted Israeli citizenship. If this assumption is relaxed, very different demographic futures emerge for Israel. 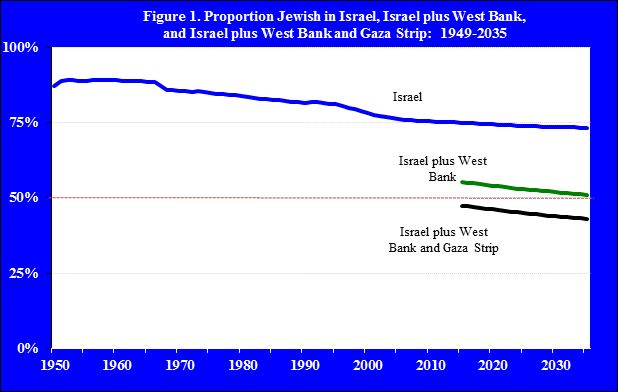 A more likely possibility perhaps would be for the Palestinians in the West Bank to be granted Israeli citizenship. At least during the first couple of decades of such a scenario, Jewish Israelis would retain their majority, being slightly above half of the total population.

However, after several decades, Jewish Israelis would likely turn out to be the minority due to higher rates of demographic growth among their non-Jewish compatriots. Here again, an expanded Israel enfranchising large numbers of non-Jews would continue to be a democracy but would eventually cease to be a predominantly Jewish state.

The current Israeli government does not envisage the establishment of a Palestinian state any time in the foreseeable future. Although some Israeli politicians have called for the creation of a separate Palestinian state in the occupied territories, key Israeli government officials and their pivotal supporters believe that it would be collective suicide for Israel to permit the establishment of a Palestinian state. They prefer to annex West Bank land, or Judea and Samaria using their terminology, which some contend is already the de facto case.

It appears highly unlikely that Israel will be able to withdraw its Jewish settlers from the occupied land as it did in 2005 when it withdrew with some difficulty about 9,000 Israeli settlers from the Gaza Strip.

Despite the government’s opposition, public resistance and the ever-expanding demographic facts on the occupied ground, the two-state solution continues to be kept on life support largely through the sponsorship, funds and hopes of the international community, in particular the United States and its Western allies.

The ostensible reason for keeping this all-but-dead diplomatic path alive is to avoid confronting the inevitable alternatives to the failed attempts to establish a separate Palestinian state.

Soon, however, the two-state solution will be given its formal funeral, especially as peace talks have collapsed and the Israeli occupation is approaching its 50th anniversary. When this happens, the options remaining for the Israelis will be limited and difficult with the one-state solution with its eventual Palestinian majority loudly knocking at Israel’s front doorstep.

In the immediate aftermath of the two-state solution’s formal demise, Israel will try to avoid facing demographic realities and maintain an untenable status quo. The Israeli government will likely continue to enforce its costly and troubling occupation and control over millions of Palestinians, expand and increase Jewish settlements and consolidate its presence and authority throughout Jerusalem. However, those and related acts will in all likelihood only exacerbate an already vexing and volatile situation.

Attempts to preserve the status quo will lead to the numerous Jewish settlements becoming increasingly entrenched and entangled in the West Bank. The living conditions and disposition of the Palestinians in the occupied territories will worsen and their human rights concerns can be expected to rise to the top of the international community’s political agenda.

Israeli administrative decisions, Knesset bills and judicial pronouncements can neither dismiss nor repeal the laws of demography. No doubt some will choose to challenge the numbers and their significance, contending that under any foreseeable demographic circumstances Israel will remain a democratic and Jewish nation.

Inevitably, however, and likely sooner rather than later the Israeli government will be obliged to acknowledge the writing on the Western Wall and address demography’s decisive implications for the future of Israel.