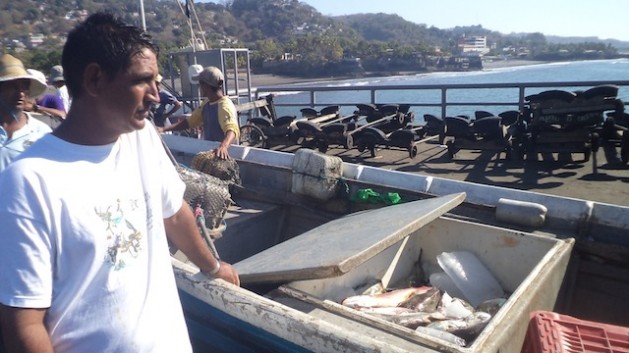 PUERTO DE LA LIBERTAD, El Salvador, Feb 7 2013 (IPS) - Boats were tying up at the jetty and there was a bustle of activity as vendors cried their wares, offering shellfish to potential buyers, while young people, sharp knives in hand, filleted sea bass and red snapper. Meanwhile, on the promenade, octogenarian musicians played old-style cumbias and boleros for restaurant patrons.

But the lighthearted atmosphere belied a sombre reality here in Puerto de la Libertad, a small town on the Pacific coast in the southwest of El Salvador.

Standing next to his small boat, fisherman Víctor Flores gazed with disappointment at the fruits of two days’ labour: just 10 fish heaped in the safe at the bottom of his boat.

“I went to sea happy, thinking I was going to feed my family, but today I don’t want to go home, I am so ashamed and sad,” said Flores.

The 44-year-old man, browned by the sun, told IPS that some years ago there was always catfish, red snapper, sea bass and mackerel on the family table.

In their view, the blame lies squarely on trawling, practised for decades by large shrimp boats that drag their nets across the bottom of the sea, gathering along the way species other than the intended catch and very young specimens that have not yet matured.

A ban on bottom trawling is vital to preserve marine life in this small Central American country, experts say. But the fall in fish stocks is also due to other factors, such as pollution and climate change, they say.

“There are various reasons; it cannot be said for certain that it is only due to overfishing,” said Enrique Patiño, head of Fundación ProPesca, an NGO based in the U.S. city of Seattle, Washington, which supports sustainable use of aquatic resources in Central America and the Caribbean.

But the most urgent action is to stop trawling, because it will have an immediate impact, Patiño told IPS.

Not just fish but other sea creatures too are at risk. Shrimp, for example, is less abundant now than it was eight years ago. The shrimp catch fell by 35 percent between 2005 and 2011, according to a report on shrimp fisheries and aquaculture published in May 2012 by the Fisheries and Aquaculture Sector Organisation of the Central American Isthmus (OSPESCA) together with the United Nations’ Food and Agriculture Organisation (FAO).

Of even greater concern is that “since 2005 it has been impossible to calculate the fishable biomass of shrimp,” says the report by Lilián Orellana. “Lack of research monitoring and estimates of reserves of this species make it difficult to determine present stocks.”

The decline in fish catches threatens the ability of the 128 coastal communities spread along El Salvador’s 320-kilometre-long coast to feed themselves.

Fish is an essential part of the diets of some 28,000 artisanal fisherfolk and their families, and also of those who depend on related activities, such as small-scale fish vendors.

Coastal dwellers are happy when they sit down to a plate of fried fish, boiled beans and a sliced tomato, said 47-year-old fisherman Fredy Pérez.

“In El Salvador, 95 percent of the artisanal fish catch is for domestic consumption,” said Patiño, so “naturally, it is important for food security.”

Fish consumption in Latin America and the Caribbean is the second lowest in the world after Africa, at only 9.9 kilogrammes per person per year, according to the “State of World Fisheries and Aquaculture 2012” report published by the FAO.

In North America, by contrast, annual consumption is 24.6 kilogrammes per person.

And if bottom trawling is not stopped, access to the high quality protein in fish will continue to fall.

In April 2011, after a decade of lobbying, two federations of artisanal fisherfolk were able to persuade parliament to establish an exclusion zone of three nautical miles for industrial shrimp trawlers.

In response, the companies represented by the Salvadoran Chamber of Fisheries and Aquaculture (CAMPAC) lodged a constitutional challenge in the Supreme Court against the new law.

The new law “is forcing companies to shut down their operations, because they cannot survive the restriction”, Waldemar Arnecke, head of CAMPAC, told IPS.

Waning catches are also noticeable in the industrial shrimping sector. And the three-mile coastal strip represents 61 percent of the productive area. At present, only 30 CAMPAC trawlers are working, while an estimated 5,800 small boats are active in artisanal fishing.

The shrimpers argue that the law violates the principle of equality. “Exclusive use of the sea should not be given to some while leaving others out,” said Arnecke.

The economic importance of shrimp exports has been declining since the 1990s, replaced by the new stellar export, tuna; CAMPAC’s clout has fallen commensurately.

According to Arnecke, the federations of cooperatives that promoted the legal reform do not represent the whole spectrum of artisanal fishers. In fact, CAMPAC entered into an alliance with the recently created Federación de Cooperativas de Pescadores Artesanales de la Bahía de Jiquilisco in Puerto El Triunfo, an umbrella group for 12 associations, to work on environmental projects in that southeastern area of the country.

“We are defending food security, and for that we need to insist on the three-mile zone,” fisherman Armando Erazo, head of the oversight board of FECOOPAZ, told a press conference.

The small-scale fisherfolk complained that the shrimp industry is continually breaking the law, which remains in force.

Arnecke admitted that some boats may have trespassed into the restricted zone, and the authorities have already recorded several incidents. IPS was unable to confirm this – several attempts to contact officials at the Centro de Desarrollo de la Pesca y la Acuicultura (Fisheries and Aquaculture Development Centre), the regulatory body for the sector, yielded no response.