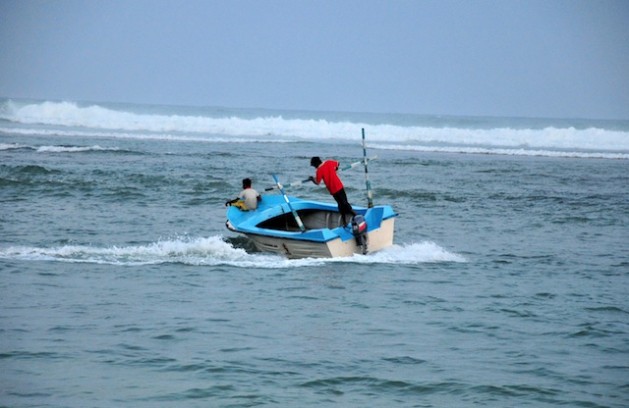 Sri Lanka fishers say they are losing as much as a fifth of potential income due to illegal poaching by Indian trawlers. Credit: Amantha Perera/IPS.

JAFFNA, Sri Lanka, Mar 6 2013 (IPS) - The sea is all that 40-year-old Arul Das has mastered. From looking at the clouds or from the direction of the wind, this fisher from northern Jaffna can predict the condition of the sea fairly accurately.

Till May 2009, the sea he fished in was the most dangerous in the region. He had to keep clear of deadly skirmishes between the Sri Lankan Navy and the naval unit of the Liberation Tigers of Tamil Eelam (LTTE). The Tigers, then fighting for a separate state for the Tamil minority in northern Sri Lanka, used the sea to smuggle arms and carry out deadly suicide attacks on the government Navy.

The Tigers often used civilian fishing boats, and that meant that Das and others like him had to be particularly careful they did not get mistaken for Tigers.

“There were fishing restrictions on the times we could go out, on the strength of the engines we used, and how far we could go,” Das told IPS.

The war ended in May 2009, when the Tigers were defeated by government forces. Das and thousands like him thought that was also the end of their troubles at sea.

But almost four years since the war ended and security restrictions were lifted, he has not been able to improve his catch. Now he faces a new mid-sea threat – Indian fishing trawlers illegally poaching in Sri Lankan waters in thousands.

On any given day, the powerful and larger Indian boats can be seen poaching across the maritime boundary in the Palk Strait, the narrow sea that divides Sri Lanka and India. These trawlers use larger nets, with some hooking concrete beams to the nets to gain better traction as they drag along the ocean bed.

Smaller Sri Lankan boats know that attempts to confront the Indian boats can end in serious losses. “Every time I have run into the Indian trawlers, I have returned to shore with damages over a thousand dollars,” Das said. Now he simply stays away from the areas where the bigger boats ply. Unfortunately, these happen to be the richest fishing waters.

Maarten Bavinck, director at the Amsterdam-based Centre for Maritime Research has been researching the impact of the Indian incursions. He told IPS that more than half the estimated 5,000 trawlers based in South Indian fishing harbours like Rameshwaran and Nagampathan depend on Sri Lanka fishing grounds for their catch.

Bavinck’s research shows that Sri Lankans have suffered dearly. His studies at two fishing villages in the north showed that fishers who would ideally go out to sea for 200 days a year have now cut this down to between 60 to 80 days. “The trawler incursions are a major reason for this low number of fishing days,” he said.

The financial impact of this reduction in fishing days is dramatic. Between 20,000 to 28,000 families depend on fishing in the northern province of Sri Lanka, according to available government data. The family members number well over 100,000.

Bavinck estimates that incomes have fallen by as much as 20 percent. In some cases the losses are as large as 300 dollars per year for a fisher whose average monthly income is around 7,000 to 8,000 rupees (53 to 60 dollars), Bavinck said.

“As one cannot feed a family on income from 60 days (at sea), these fishers necessarily have to find additional income sources, such as working as masons,” he said.

The contributions of fishing to the regional economy have also lagged. They remain a relatively small 3 percent of the provincial economy, a third of the share a decade back during a ceasefire.

The poaching is on the rise despite patrolling by the Sri Lankan Navy and its Indian counterpart along the maritime boundary that runs 463 km between the island’s northern coast and the Indian mainland. Indian boats have been sighted as far out as the seas of eastern Trincomalee and Mulaittivu, more than 300 km from the nearest Indian coast.

Nimal Hettiarchchi, director general of the Sri Lanka Department of Fisheries and Aquatic Resources told IPS that the authorities in both countries acknowledge the issue of poaching. “I don’t think enforcement is the answer, we need to come up with a workable solution that has support of fishermen on either side.”

The official said that discussions were continuing at ministerial level at the joint working group on fishing set up in 2011.

Bavinck agreed that any solution should be a mutual compromise. “The trawl fleet in India needs to be reduced in size, so that it matches the carrying capacity of Indian waters. This is a complex process.”

Many Indian fishers still regard areas outside the country’s maritime boundary as their traditional fishing grounds, despite the boundary that was agreed in 1976. “The Indian trawler fleet has nowhere else to go but Sri Lanka (waters),” Bavinck said.

For the time being there is usually peace. Fishers in the north tell IPS they have been instructed not to engage the Indians.

“We have been told to let them fish and go back, even the Navy seems to follow that,” said Douglas Paul, a boat owner from the northern fishing port Point Pedro.