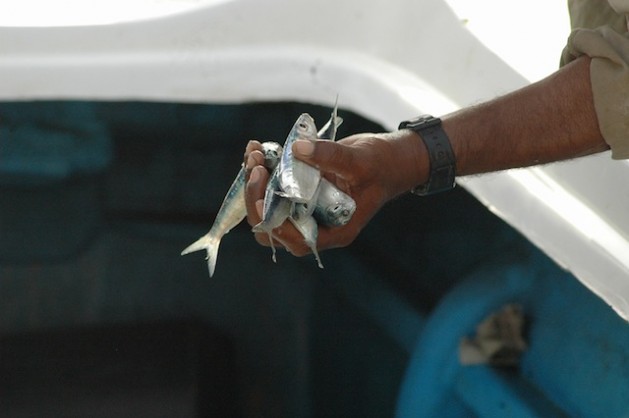 Sri Lankan fishermen say a lack of regulations allows them to fish anywhere, for anything. Credit: Amantha Perera/IPS

COLOMBO, Dec 1 2012 (IPS) - Somali pirates on the southwest Indian Ocean have become one of the biggest security risks for commercial maritime shipping over the last several years. But even as piracy gave rise to international furore, an unlikely benefactor emerged: bluefin tuna stocks in the Indian Ocean.

“Now that boats are operating with their own armed guards, the fish stocks are once again under threat,” Tolvanen said. According to Greenpeace, tuna populations in the Indian Ocean are between five to 10 percent of what they were in the 1950s when commercial fishing took off in the region.

But since piracy is obviously not the desired method for safeguarding marine life, Tolvanen and other experts are now pushing governments in the region to take more assertive action to stem illegal fishing practices that they say are decimating fish stocks, some of which are endangered.

One of the biggest problems is the “thousands of multi-day fishing trawlers that go out and fish indiscriminately”, Tolvanen, who recently toured the Indian Ocean aboard the Greenpeace vessel ‘Rainbow Warrior’, told IPS.

Sri Lanka has been one of the biggest culprits in violating international environmental regulations, allowing multi-day trawlers to fish at sea with little or no supervision.

In one such incident on Oct. 24, Greenpeace came upon a registered Sri Lankan wooden hull trawler inside the bounds of the Chagos marine reserve, about 1,500 kilometres south of India.

Chagos was declared a marine reserve by the British government in Apr. 2010. Spanning 640,000 square kilometres, it is the largest “no-take” marine reserve in the world.

Though the boat was not engaged in any fishing activity at the time of the encounter, Tolvanen and other activists suspected that it had been fishing illegally within the reserve before the Greenpeace ship approached.

Having gained access to the ship’s storage areas, activists found them to be filled with sharks.

“The first storage area had mainly sharks (with fins attached) as well as a few tuna and a swordfish. The other, bigger hold was full of sharks. They were relatively small in size and included at least two (endangered) bigeye thresher sharks,” according to a Greenpeace report on the encounter.

Tolvanen told IPS that many of these boats were using gill nets and longlines, which cause extensive damage to marine life. The particular vessel that Greenpeace inspected on Oct. 24 was using a kilometer-long gill line.

“They are contravening international treaties because there is no one monitoring (marine activity),” she said.

During her last visit to Sri Lanka, Tolvanen visited a fishing port in Negombo, a city in the Western Province that sits directly at the mouth of the country’s largest lagoon, and found endangered fish varieties openly up for sale.

Bluefin tuna are particularly impacted by Sri Lanka’s illegal fishing practices: according to the Ministry of Fishing, that particular species made up 42 percent of Sri Lanka’s fish catch last year, amounting to roughly 140,000 tonnes in 2011.

In the same week as the Rainbow Warrior intercepted the Sri Lankan vessel at Chagos, the European Union warned Sri Lanka and seven other countries that their inaction to prevent illegal fishing could mark them as “uncooperative partners” in the global fight against unlawful marine practices.

The EU reported that these states – including Belize, Cambodia, Fiji, Guinea, Panama, Togo and Vanuatu – had failed to take corrective measures to stem the practice.

“We want these countries as partners to combat illegal fishing. We want them to improve their legal and control systems as required by international rules,” EU Commissioner in charge of maritime affairs and fisheries, Maria Damanaki, said in a statement.

In a report that accompanied the warning the EU noted that, despite being a member of the Indian Ocean Tuna Commission (IOTC), Sri Lanka does not have a licensing mechanism for high seas fishing, giving free reign to its trawler fleet to fish anywhere, for anything.

Nimal Hettiarchchi, director general of the department of fisheries and aquatic resources, said so far this year there had been only one such complaint and in 2011 there were “only 11”.

“These are very rare cases,” he said, given that Sri Lanka has at least 3,800 registered multi-day fishing trawlers that spend close to a month out at sea during each fishing trip.

Fishermen working on the trawlers, however, told IPS that there was hardly any monitoring or regulation on where and how they fished.

“I have never heard of anyone facing any punitive action (in Sri Lanka) for fishing illegally or catching endangered species. There is no one who checks what we bring in or where we have fished,” Sujeewa, a fisherman from the southern fishing port of Tangalle who declined to give his full name, told IPS.

He added that on rare occasions, fishermen transferred their catch mid-sea to other boats, sometimes from other countries.

But even if the Fisheries Department, along with its 149 fishing inspectors, do manage to inspect all the catch that comes in, there is no legal mechanism that allows punitive action to be taken against those caught contravening international treaties, Hettiarchchi said.

The official also told IPS the government is currently in the process of amending the 1996 Fishing and Aquatic Resources Act, to “incorporate adherence to international agreements”.

Tolvanen stressed that countries in the region need to urgently reach an agreement on monitoring and levels of fishing.

“There are so many boats going out from so many different countries that (the situation) is completely out of control right now,” she said.