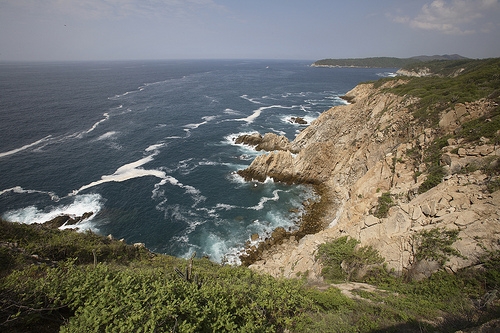 MEXICO CITY, Sep 21 2012 (IPS) - The authorities in Mexico seem to have thrown in the towel in the fight against illegal fishing, which is hurting fisheries, the environment, and incomes.

An estimated 30 to 50 percent of the fish caught in this country are illegally captured, whether out of season, using banned techniques and methods, over quota, or by boats fishing without a license.

“It’s a sector that is difficult to regulate,” Rodrigo Gallegos, head of the Mexican Institute for Competitiveness (IMCO), told IPS. The institute is about to publish a report on productivity, regulations and the environmental impact of fishing. “In practice, there is free access, and it is difficult to control the illegal flow of trade.”

Compliance with laws is a problem in Mexico, which has become one of the main hubs of drug trafficking in Latin America and the world, and where 90 percent of crimes go unsolved.

Last year, the catch in this country totalled 1.64 million tons of fish, worth 1.28 billion dollars, more than 800 million of which were exported, according to the National Commission for Fishing and Aquaculture.

Mexico has extensive areas of continental shelf in the Gulf of Mexico, the Caribbean, and the Pacific Ocean, as well as nearly 20,000 square kilometres of coastal lagoons, estuaries, lakes, reservoirs and rivers, rich in fish stocks.

But because the fishing is done without controls, many species are over-exploited.

The 2012 National Fishing Charter, issued by the ministry of agriculture, acknowledges the heavy over-exploitation, and recommends curbing the pressure on stocks of shrimp, sardines and tuna.

“The situation is conflict-ridden; there are many people interested in a scarce resource, and the policies governing access to them are unclear,” said Juan Aceves, of the marine conversation programme run by the Niparajá Natural History Society, which promotes protection of biodiversity in the Baja California peninsula in northwest Mexico.

The laws are not enforced “and there is not a strong culture of respecting laws and regulations in the fishing industry,” he told IPS.

“What works is to work with certified communities,” said IMCO’s Gallegos. “It is possible to apply environmental measures to fishing, it’s a sector that adapts easily. But productive reconversion is not viable.”

The Pacific coast accounts for 80 percent of fishing production, the Gulf of Mexico and the Caribbean represent 18 percent, and rivers and lakes represent the remaining two percent.

Measures taken by the authorities to curb pressure on the fisheries include fishing bans on species like shrimp, octopus and shark, the replacement of boats, and the cancellation of permits.

But the impact of these actions is not significant. More than 1,000 fishing permits were issued for shrimp and shark last year, and only 46 were cancelled.

A report published two years ago by the U.N. Food and Agriculture Organisation (FAO) called for clear fishing regulations.

The study interviewed small-scale fishers, who complained about the rise in the cost of fuel, the drop in catches, and the low prices fetched by their products, which they said did not even cover the costs of the fishing trips.

People working in the fishing industry know what their problems are: too many boats, the capture of immature specimens, bans that are not enforced, and a lack of alternative employment opportunities in coastal communities.

Of the country’s 94,000 fishing boats, 90,000 are small-scale boats or work on rivers. But the remaining 4,000 are industrial fishing boats, which account for 40 percent of the national catch.

“Small-scale fishing has been relegated, and that has led to many people working in irregular conditions,” Aceves said.

Niparajá has been working since 2004 with a group of 160 fishers in the northwestern state of Baja California Sur to restore the fisheries, by promoting sustainable fishing techniques, the definition of fishing seasons, and better organisation.

The community there catches around 50 tons a year and has defined 11 areas where fishing is banned, so the species can recover.

Since 2003, Niparajá and Community and Biodiversity, a local non-governmental organisation, have organised the “De pescador a pescador” conference to allow fisherpersons to share their experiences every three years.

His advice? “The government should sit down to plan, and to decide what kind of fishing industry they want.”