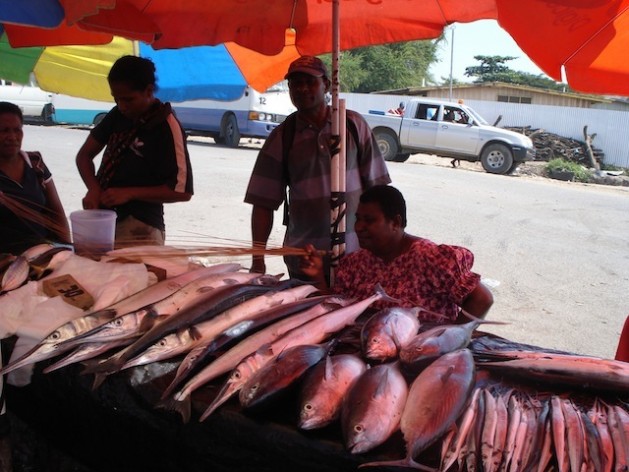 Regional organisations like the Secretariat of the Pacific Community (SPC), along with local NGOs, are pushing for the development of Marine Protected Areas to safeguard the future of marine ecosystems and livelihoods.

Nancy and her family are fishers from the Hula village in the Central Province, located on the south coast of Papua New Guinea.  Over the years, she has noticed striking changes in local fish populations.

“In the 1970s our fishermen were still using traditional fishing methods. One or two would go out in a canoe and catch fish with spears,” Nancy recounted. “There was a lot of fish in our coastal area then.

“One family can own up to four or five dinghies,” she continued. “Now there is less fish being caught, especially the large fish, and fishermen are trying to sell everything they get, even the tiny fish, octopus and shells.  There are fewer fish caught and they are more expensive.”

According to the United Nations Food and Agriculture Organisation (FAO), 95 percent of small-scale fishers are located in developing countries and over 500 million people in the developing world depend on fisheries for food security.  Coastal subsistence fisheries production in Papua New Guinea is more than 30,000 tonnes per annum, compared to coastal commercial fisheries, which produce approximately 6,000 tonnes annually.

Papua New Guinea, part of the Coral Triangle, which includes the Solomon Islands, Indonesia, Philippines, Timor Leste and Malaysia, is home to diverse marine ecosystems.  Coastal resources of the Coral Triangle – comprised of 53 percent of the world’s coral and home to 76 percent of all known corals and 37 percent of coral reef fish species – sustain 363 million people.

But climate change, especially increased air and sea surface temperatures and ocean acidification, is predicted to degrade reef habitats and spur the migration of marine species away from the equator and toward the polar extremes. Ninety percent of coral reefs could be endangered by 2030 and the SPC predicts Pacific reef fish populations could decline by 20 percent by 2050.

“Fish stocks in many parts of PNG are still in a good state, except in areas where there are dense populations and close to urban centres where better markets for sale of catch from coastal fishing exist,” he continued. “This makes overfishing an immediate threat and for the future climate change is a threat that we have to prepare for by developing resilient strategies to assist coastal communities.”

The Alliance of Small Island States (AOSIS) advises that strategies for sustainable fisheries should include assessing the status of fish populations, implementing monitoring systems and establishing sound management approaches, such as Marine Protected Areas (MPAs).

MPAs are designated geographical areas, incorporating ocean resources, where human activities are subject to varying restrictions in order to preserve ecosystems and address the socio-economic needs of coastal communities. In 2010, it was estimated that MPAs covered 0.32 percent of terrestrial waters in Papua New Guinea.

The custom design of each MPA in Kimbe Bay, a habitat vulnerable to ocean acidification, coral bleaching and coastal deforestation, and home to 100,000 people, is based on biodiversity and socio-economic assessments and objectives of climate change resilience. MPAs include coral reefs, mangroves, seagrass areas, turtle nesting beaches and significant island habitats for sea birds.

“First we communicate knowledge and awareness of MPAs and then (host landowners and communities) let us know if they are interested,” Barbara Masike, project manager for Kimbe Bay Marine Management Area, explained.

“They are the resource owners and users and we have to make sure that everyone is in agreement.  We only facilitate the process. They have to set up site committees, make decisions on how the areas are managed, agree the management plan and make sure rules are adhered to.”

Restricting human activities in protected areas may include prohibition of the dumping of waste in the sea and on beaches, night diving, the cutting of mangroves and fishing and harvesting of marine resources for specific periods in no-take areas.

“It is a good tool to use in enhancing stocks in heavily fished areas,” he claimed. “However, the size of MPAs and where they are placed in relation to water currents and proximity of other critical habitats, such as reefs and mangroves, are important determinants of whether or not MPAs will enhance fish stocks.”

Promoting food security and combating poverty in small fishing communities, which can be exacerbated by lack of public services, exclusion from the benefits of development and susceptibility to natural disasters is also a goal of marine protected areas. TNC is training community-based teams to monitor marine resources, including fish being used for human consumption.

“In Papua New Guinea, we have to put our local people’s needs up front; our work must link to people’s socio-economic needs,” Masike emphasised.

In a 2010 report on the state of the world’s fisheries, the FAO pointed out that the vulnerability of fisheries and fishing communities depends partly on the ability of individuals or systems to anticipate and adapt to change.