DAKAR, Feb 11 2011 (IPS) - Senegalese fishers participating in the 2011 World Social Forum (WSF) warned governments to “wake up to the ethical and transparent regulation of access to fisheries” to halt the overexploitation of this increasingly scarce resource. 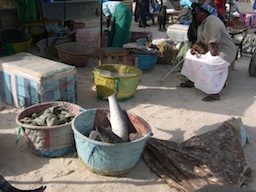 Charles Bakundakwita, executive secretary of the West African Association for the Development of Artisan Fishing (known by its French acronym ADEPA), told IPS at the WSF that, “we ask African states and the European Union to consider this danger and limit the depletion of fish stocks, both by large and small fishers”.

Fishing officially supplies work to 600,000 people in Senegal, or 17 percent of the active working population. 400,000 tons are caught every year, contributing 2,3 percent of gross domestic product (GDP) and 30 percent of exports. But the scarcity of fish is a major problem. During the “soudure” – the rainy season when there is no fish – people fall into debt.

Since 2007, Senegal has not renewed the fishing agreements with the European Union (EU) that gave large European trawlers access to its national waters. The National Federation of Fishers Associations (known by its French acronym FENAGIE) has been key in the opposition to these fishing licences.

The licences meant insufficient financial compensation that did not benefit communities.

“Senegal received between 21 and 23 million dollars per year from these fishing agreements,” Papa Gora Ndiaye, executive secretary of the fishing division of Enda Tiers Monde, known by its French acronym REPAO, told IPS in an interview. Enda Tiers Monde is an international non-governmental organisation based in Dakar, working on development issues.

“But, compared to the export earnings of 165 to 207 million dollars, the financial compensation of the fishing agreements was ridiculous, if not more so considering the potential benefits of equitable trade. If market access to the EU was improved, Senegal could earn much more.”

Even though Senegal, like all other least developed countries, can export duty-free and quota-free to the EU under the Everything but Arms initiative, other technical barriers to trade such as rules of origin and sanitary and phyto-sanitary measures make it hard for local fish to reach the European market.

The fishing agreements with the EU largely contributed to the depletion of resources, though FENAGIE recognises that the bad practices of Senegalese fishers are to blame too.

Even though the licences have been suspended, fishers fear the existence of secret agreements with other foreign ship owners.

“Our main recommendation is to have transparent and ethical governance of fishing resources in West Africa,” urged Ndiaye. “The WSF provides momentum for mobilisation and awareness-raising of stakeholders. It is a window of opportunity for us.”

Bakundakwita added that, “while fishing was a prosperous activity some years ago, small fishers are now getting poorer and poorer. Artisan fishing has deteriorated. There are too many fishers: foreign trawlers, but also local industrial and artisan fishers”.

He explained that artisan fishermen do not only fish for their own consumption anymore but to sell their product on the local market. The best catch goes to foreign, more lucrative markets. The depletion of stocks makes fish more and more expensive and many people cannot afford to buy it any more.

This decrease in the availability of fish hits mainly women, who process and dry the fish. “If there is no more fish, they will be jobless and it will be a catastrophe,” Bakundakwita believes.

The authorities are afraid to regulate, according to him. “Fishing licences bring money in. To limit the access of small fishers to the sea there need to be alternative activities for them, and there is none.”

Ndiaye also expressed concern about the economic partnership agreements (EPAs) currently being negotiated with the EU. The African market will be open to European products, like tuna that will come in at a lower cost than the local tuna.

“But even before the EPAs are adopted, there has been progressive erosion of commercial preferences. Senegalese tuna is hardly competitive on the European market when compared to Asian tuna that is grown in aquaculture with huge government support.”