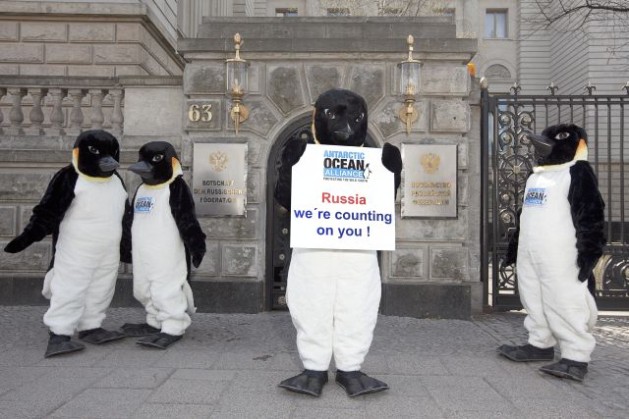 UXBRIDGE, Canada, Apr 24 2013 (IPS) - Everyone loves penguins, but few will know that Thursday is World Penguin Day. Fewer still are those who know penguins are threatened with extinction by climate change and giant fishing trawlers from Europe and Asia stalking the oceans around Antarctica.

Penguins are a protected species, but the factory-sized trawlers are vacuuming up the tiny shrimp-like krill that are their main food source. The Southern Ocean is also becoming increasingly acidic from emissions of fossil fuels and will have a significant impact on krill populations.

"It's absurd. We're going to the ends of the world to find the last few fish." -- Greenpeace's Thilo Maack

And yet efforts to create two marine protected areas in the Southern Ocean have been blocked by China, Russia and Norway.

A network of protected areas was supposed to be established last year but the Commission for the Conservation of Antarctic Marine Living Resources (CCAMLR) failed to reach a consensus, said Donna Mattfield of the Antarctic Ocean Alliance, a coalition of 30 scientific and environmental organisations.

All 25 CCAMLR member nations had committed to establishing a network but could not agree on marine protected area (MPA) proposals for East Antarctica, and the Ross Sea. They previously agreed to one small MPA in the South Orkney Islands, Mattfield told IPS.

“There’s no scientific justification for not going ahead with the MPAs,” she said noting that less than two percent of the world’s oceans are under any kind of protective management.

The proposed MPAs cover several million square kilometres of the Southern Ocean with a combination of multiple use MPAs and no-take marine reserves. A final decision on these MPAs will come at a special CCAMLR meeting in Bremerhaven, Germany in July.

“The Southern Ocean is under increasing pressure from climate change and resource extraction, but areas such as the Ross Sea and East Antarctica are amongst the least impacted, healthiest, and most beautiful oceans in the world. They are one of the last remaining wildernesses on the planet and deemed a necessary ‘living laboratory’ by scientists”, said Onno Gross, a marine biologist and director of Deepwave, an ocean conservation NGO.

Of the world’s 18 penguin species, 13 are now so threatened they need special protection. In the last few years, factory trawlers have made their way to the remote Southern Ocean to catch krill for the fast-growing trade to supply krill as fish meal for farmed salmon.

More recently, krill are being used to supply the booming health food and pharmaceutical markets for omega-3 three fatty acids believed to prevent heart disease and inflammatory conditions such as arthritis.

“Omega-3 three fatty acids can be obtained from plants. We don’t need them from fish,” says Thilo Maack of Greenpeace.

Europeans are subsidising the construction of supertrawlers that are plundering the oceans off West Africa and now the Southern Ocean because there aren’t enough fish left in European waters, Maack told IPS.

He knows of at least two German-built supertrawlers that are fishing krill. “It’s absurd. We’re going to the ends of the world to find the last few fish. We haven’t learned from our mistakes,” he said.

CCAMLR has set a krill quota of 400,000 tonnes and some 50 trawlers now ply the cold and dangerous waters. Just last week in the Ross Sea, a Chinese supertrawler caught fire and its crew of nearly 100 had to rescued. Luckily the trawler did not leak its thousand tonnes of diesel fuel.

Not a great deal is known about Antarctic krill populations. They are believed to exist in the hundreds of millions of tonnes. However the Southern Ocean is undergoing rapid changes. Krill larvae feed on algae living on the bottom of sea ice, which is rapidly dwindling around the Antarctic Peninsula with rising temperatures.

According to one estimate, the number of krill in the Southern Ocean may have dropped by 80 percent since the 1970s.

CO2 emissions from fossil fuels has made seawater is 30 percent more acidic than 50 years ago. These acid waters weaken or dissolve the shells of many creatures like sea snails. This is already happening in parts of the Southern Ocean. Krill will also be affected especially as acidification worsens with more CO2 emissions, says Maack.

Without major emissions cuts, large parts of the Southern Ocean will be too acidic for shell-forming species, including most plankton and krill, by 2040, oceanographer Carol Turley from Plymouth Marine Laboratory in the UK previously told IPS.

“We are hoping Germany as host of the special CCAMLR meeting in July will push China, Russia and Norway into agreeing to the two proposed MPAs,” Maack said.

There is a lot riding on this decision Mattfield believes. “It’s an opportunity to create the biggest protected area in history,” she said.