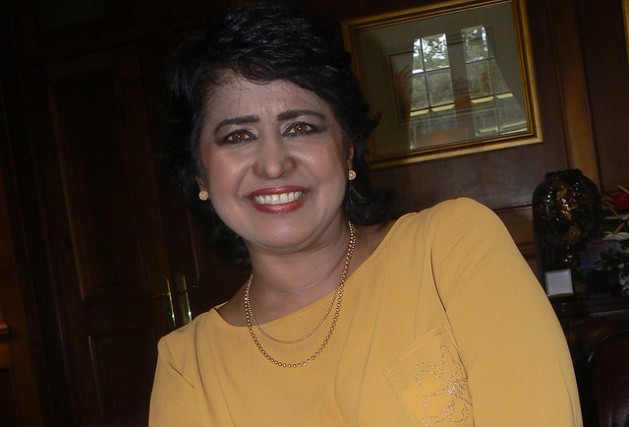 PORT-LOUIS, Mauritius, Apr 19 2017 (IPS) - An internationally renowned scientist, Ameenah Gurib-Fakim became Mauritius’s sixth president on June 5, 2015 – and one of the few Muslim women heads of state in the world.

Her nomination constituted a major event in the island’s quest for greater gender parity and women’s empowerment, giving a higher profile to women in the public and democratic sphere of Mauritius.

Gurib-Fakim started her career in 1987 as a lecturer at the Faculty of Agriculture, University of Mauritius. She was one of the leading figures in local academia with a reputation far beyond the Indian Ocean before she accepted the post of president.

She has also served in different capacities in numerous local, regional and international organizations. Gurib-Fakim has lectured extensively and authored or co-edited 26 books and numerous academic articles on biodiversity conservation and sustainable development.

In this exclusive interview with IPS, President Gurib-Fakim urged world leaders to save our oceans, noting that this critical ecosystem impacts millions of livelihoods, particularly for small island-states and coastal communities.

This June, the United Nations will convene a high-level Conference to Support the Implementation of Sustainable Development Goal 14: Conserve and sustainably use the oceans, seas and marine resources for sustainable development at U.N. Headquarters in New York.

Human activity has already left a huge footprint on the world’s oceans, Gurib-Fakim notes. “We have always assumed that the ocean is a dumping ground – which it is not.”

Q: How would you rate the oceans in terms of importance in the context of sustainable development?

A: The ocean space occupies 70 percent of the world’s surface and it still remains unknown. There is no doubt that ocean space impacts livelihood, especially for islands and coastal communities. Several countries in the South-West Indian Ocean, for example, rely heavily on fishing to sustain livelihoods. In 2013, fish accounted for 17 percent of the world population’s intake of animal protein and 6.7 percent of all protein consumed. Coral-reef fish species also represent an important source of protein.

With more than 60 percent of the world’s economic output taking place near coastlines and in some African countries, the ocean economy contributes 25 percent of the revenues and over 30 percent of export revenues. It is becoming increasingly clear the enormous potential of our oceans.

Q: Do you think that the objectives of the World Ocean Summit can still reverse the decline in the health of our ocean for people, planet and prosperity?

A:  This Summit brings on board all the stakeholders involved with ocean issues. This summit is also a pledging conference as funding always remains a thorny issue and yet there is urgency in data collection on several areas of the ocean ecosystems. It provides the policymaker and the researcher a holistic picture of what the ocean stands for and will hopefully change the narrative on the need to reverse the decline of the health of our ocean space.

Climate change remains a big component as acidification of the waters as well as rise in temperatures will affect both the flora and fauna.

We must always be mindful to the fact that humans have had a huge footprint in the health of our oceans as we have always assumed that the ocean is dumping ground. It is NOT. There are within the ocean space, very fragile ecosystems that can be destroyed by small increases in acidity or temperatures.

Q: As an Ocean State, Mauritius does not seem to have given due consideration to the importance of our oceans in terms of an environmental asset. How would this Ocean Summit help to change our mindset?

A: Mauritius has a very small landmass, we have a very huge space of 2.2 million km and I think what the ocean summit helps us to do is to bring back to the fore these multiple challenges or opportunities that the ocean as an entity presents to the economy of Mauritius. As I said, one of the areas will be sustainable fishery, which can be flagged into the economy. Mauritius and in the South West Indian Ocean fisheries are threatened, with up to 30 percent of the fish stock over-exploited or depleted and 40 percent fully exploited. The poor management of this sector has amounted to an annual loss of about USD 225 million.

However, the ocean is not only fish, it is also sustainable tourism as well as renewable energy, including wave energy, amongst others.

Q:  The health of our oceans is critical for the survival of humanity. We have seen that despite all the international conferences and commitments, all the ecosystems of our planet are collapsing one after the other. How will this conference help to change things globally, but equally locally?

A:  For me, the ocean cannot and should not be taken as a dumping ground or a carbon sink. We should also take stock of effluents coming from the rivers as all the runoffs eventually end up in the sea.  Plastic pollution is also a very big issue because we know that a lot of damage is being done to wildlife because of un-recycled plastic. These conferences help us to see visually the impact of these polluting activities. They also bring live images, testimonies from people who have first-hand experiences. They help to change the mindset of people. They also try to bring people to think differently, sustainably.  We need to change the way people do business, the way people look at the ocean, we need to have a completely fresh look at these.

Q: Climate change is a major challenge for the survival of humanity, and we have seen that the United States of America has started to back-pedal on climate change agreements. How do you perceive this change of policy from a major carbon dioxide producer?

A:  To me, climate change is the biggest threat to humanity because it will impact not only on the ocean but also all the ecosystems on earth. It will impact the loss of many species; already 17,000 are threatened and when these species disappear, they reduce the resilience of our ecosystem. I always say biodiversity underpins life on earth and it also in the ocean as well. This balance in the oceans ecosystem is very very fragile.

So, any change, even half a degree increase in temperature of the water, is not sustained by the animals living out there and they will disappear and that is a thing that we do not want to envisage. Now, some countries want to backpedal on climate change agreements, it’s very unfortunate because many countries have fought very very hard to contain emissions. Large economies like India have started a global alliance on renewal energy, China has also made pledges, but it would be unfortunate that any country pulls out of this agreement because we are not talking about the short term but about the long term and for the larger good of humanity.

For those countries that feel that they still need fossil fuels to grow the economy, green technologies have shown that it is possible to sustain growth with same. It is proven and I don’t think people have to shy away from the fact that by disinvesting in fossil fuels their economy will still progress. Clean energy is the answer.

Q: What are your hopes and expectations for the ocean summit?

A: The hope is that those who made pledges deliver on them. We are not too far off the tipping point, but I think all is not lost. We need to act fast and deliver on results as well as on commitments. Our future depends on it.

Q: Nearly two years into your term as President of the Republic of Mauritius, how do you perceive the question of gender equality in Mauritius, and are things are improving?

A: Post-independence Mauritius had a very low per capita income of around 200 USD. Several decisions had been taken since then to ensure the well being of the people and one such decision was to make education free for all in 1976. Education is an enabler and ensures social mobility of people. At that moment in time, parents did not have to make choices of whether to educate their sons or daughters.

Over 40 years down the line we have seen the transformation that this decision has had. The percentage of women in many professional spheres has increased. The medical, judiciary, teaching professions have more than their fair share of women’s representation. We may be weak in terms of percentage at board levels or in politics but I think that it is work in progress. My message is very clear on this issue… any country that wants to make progress cannot afford to ignore 52 percent of its workforce and talents.