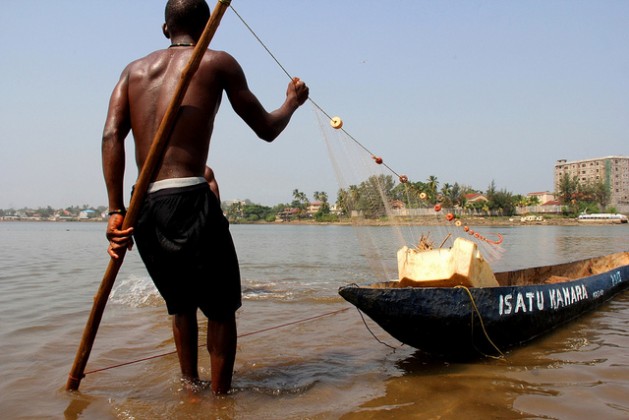 Fishermen use basic wooden canoes to set nets off the coast of Freetown, Sierra Leone. Economies that are dependent on fisheries will be hit hard by warming oceans. Credit: Travis Lupick/IPS

NEW YORK, Jul 3 2015 (IPS) - If global carbon dioxide emissions are not dramatically curbed, the world’s oceans – and the many services they provide humanity – will suffer “massive and mostly irreversible impacts,” researchers warned in Science magazine Friday.

The report said that impacts on key marine and coastal organisms and ecosystems are already detectable, and several will face high risk of impacts well before 2100, even under a low-emissions scenario of warming below two degrees C.

“These impacts will occur across all latitudes, making this a global concern beyond the north/south divide,” the report said.

Twenty-two leading marine scientists collaborated in the synthesis report . They stress that warming and acidification of surface ocean waters will increase proportionately as CO2 accumulates in the atmosphere. Warm-water corals have already been affected, as have mid-latitude seagrass, high-latitude pteropods and krill, mid-latitude bivalves, and fin fishes.

Ocean acidification is especially dire for Small Island Developing States (SIDS) and people that rely on specific types of fisheries or organisms for their survival.

Ten years ago, only a handful of researchers were investigating the biological impacts of ocean acidification. Whilst their results gave cause for concern, it was clear that more measurements and experiments were needed.

Around a thousand published studies later, including this latest in Science magazine, it has now been established that most if not all marine species will suffer in a high CO2 world, with serious consequences for human society.

The world’s oceans have absorbed nearly a third of the CO2 produced by industrialisation since 1750 and over 90 percent of the additional heat.

As a result, the report says the chemistry of the seas is changing faster than at any time since a cataclysmic natural event known as the Great Dying 250 million years ago.

And as atmospheric CO2 increases, protection, adaptation, and repair options for the ocean become fewer and less effective.

“The ocean has been minimally considered at previous climate negotiations. Our study provides compelling arguments for a radical change at the U.N. conference (in Paris) on climate change,” said Jean-Pierre Gattuso, lead author of the study.

Scheduled for Nov. 30 to Dec. 11, COP21, also known as the 2015 Paris Climate Conference, will, for the first time in over 20 years of U.N. negotiations, aim to achieve a legally binding and universal agreement on climate, with the aim of keeping global warming below two degrees C.

It is expected to attract close to 50,000 participants including 25,000 official delegates from government, intergovernmental organisations, U.N. agencies, NGOs and civil society.

However, even under a scenario of less than two degrees of warming, many marine ecosystems would still suffer significantly, the report says, calling for immediate and substantial reduction of CO2 emissions.