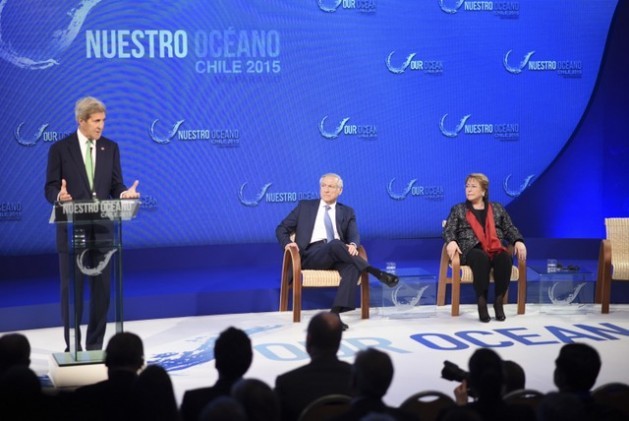 U.S. Secretary of State John Kerry addressing the second international Our Ocean conference, held in the Chilean port of Valparaíso. Sitting next to him are Chilean Foreign Minister Heraldo Muñoz and President Michelle Bachelet. Credit: Foreign Ministry of Chile

VALPARAÍSO, Chile, Oct 8 2015 (IPS) - Seafood offers a large amount of animal protein in diets around the world, and the livelihoods of 12 percent of the global population depend directly or indirectly on fisheries and aquaculture.

However, the impacts of climate change, plastic waste pollution, illegal fishing, and acidification threaten the oceans and their biodiversity, said experts at the second international Our Ocean conference, held Oct. 5-6 in the Chilean port of Valparaíso, 120 km northwest of Santiago.

The more than 500 participants from 56 countries taking part in the gathering committed to some 80 marine conservation and protection initiatives for over 2.1 billion dollars, covering more than 1.9 billion km of ocean, said Chile’s foreign minister, Heraldo Muñoz.

Muñoz and his U.S. counterpart, Secretary of State John Kerry, hosted the conference, whose first edition took place in 2014 in Washington, D.C.

In one of the keynote speeches, the director general of the United Nations Food and Agriculture Organisation (FAO), José Graziano da Silva, said keeping the oceans healthy and productive was key to eradicating hunger and reaching the 2030 Agenda for Sustainable Development adopted by the international community during a Sept. 25-27 U.N. summit in New York.

“We cannot continue to use water resources as if they were infinite,” said Graziano da Silva, who pointed out that nearly one-third of the world’s fish stocks are overfished.

The U.N. official said oceans do not have an infinite capacity to withstand the threats they face: over-exploitation of marine resources, climate change, pollution and loss of habitat.

“The health of our own planet and our food security depends on how we treat the blue world,” he stated.

FAO emphasises that fish is a highly nutritious complement to diets lacking in essential vitamins and minerals.

And in some countries, especially small island states, fish accounts for over 25 percent of animal protein intake, the U.N. agency reports.

Besides offering a staple element in diets worldwide, fishing and aquaculture provide jobs and incomes to millions of people across the planet.

“Fishing is part of the oldest, most remote history of the American continent,” social anthropologist Juan Carlos Skewes told IPS. “In the interior of the continent as well as along the coasts and rivers it provided sustenance for dozens of native peoples, especially groups whose nomadic way of life depended on the sea.”

And that is still true: 12 percent of the global population – or 875,000,000 people – depend directly or indirectly on fishing and aquaculture.

“The sea is so important for us because it not only feeds us, but gives us life,” said Petero Edmunds, mayor of Rapa Nui, better known as Easter Island, located 3,700 km off the coast of Chile in the Pacific ocean. 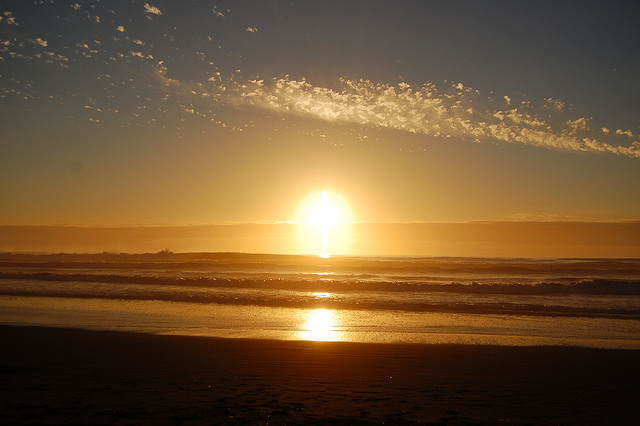 Oceans cover over 70 percent of the planet’s surface and 97 percent of all water on earth is salty, but only one percent is protected. Credit: Marianela Jarroud/IPS

“For Polynesians, the sea is our source of life,” he said in an interview with IPS. “It is so important that in our mythology we have Tangaloa, the God of the Sea, and in Rapa Nui’s ancient traditions, when a baby is born, the first thing the father must do is dip it into the sea, to return it to its natural state.”

The main one is the Humboldt Current, in the Pacific ocean. It flows north along the west coast of South America, from the southern tip of Chile, past Ecuador, to northern Peru, creating one of the world’s most productive marine ecosystems with approximately 20 percent of the world’s fish catch, according to FAO.

Other important ecosystems in the region, in the Atlantic ocean, are the Patagonian Shelf along the coasts of Argentina and Uruguay, and the South Brazil Shelf.

But these ecosystems are in serious danger: Around eight million tons of plastic bottles, bags, toys and other plastic waste is dumped into the oceans every year, killing innumerable marine animals and sea birds.

In addition, nearly one-third of global fish stocks are overfished.

Of the 17 Sustainable Development Goals (SDGs) approved at the late September global summit in New York, number 14 is to “conserve and sustainably use the oceans, seas and marine resources.”

But the interdependence of the 2030 Agenda for Sustainable Development and the vital role played by oceans which, for example, absorb more than 30 percent of carbon dioxide emissions, mean the SDGs are impossible to achieve without healthy and resilient oceans.

“Today we know there is a much closer relationship between oceans and climate change,” EU Commissioner for Environment, Maritime Affairs and Fisheries Karmenu Vella told IPS.

He added that the protection of oceans should be a central focus of the 21st session of the Conference of the Parties (COP21) to the U.N. Framework Convention on Climate Change (UNFCCC) to be held in Paris from Nov. 30 to Dec. 11.

Foreign Minister Muñoz, meanwhile, said the government leaders taking part in the conference in Chile, who will also attend COP21, “have promised that protection of the oceans will be included in the documents and commitments that emerge from the summit.”

Muñoz stressed the importance of the announcements made by a number of countries at the Valparaíso conference.

He emphasised Chile’s pledge to protect more than one million sq km of sea, which will be one of the largest protected marine areas in the world.

As part of that initiative, the country announced the creation of 720,000 sq km of protected areas in Rapa Nui, as demanded by the island’s slightly over 5,000 inhabitants, who are seeking to protect the biodiversity of the surrounding waters, which are home to 142 endemic species, 27 of which are endangered or threatened.

The measure will also make it possible for them to continue their ancestral practice of subsistence fishing in the island’s 50 nautical mile zone.

“Artisanal fishing is still practiced according to our ancestral traditions in Rapa Nui,” Edmunds said. “Rocks are used as weights for the hooks, so we can catch tuna or other big fish.”

He said the creation of the marine protected area, announced by President Michelle Bachelet at the opening of the conference, would help combat illegal fishing in the waters surrounding the island.

“For decades we have seen ‘ghost’ ships that appear in the early hours of morning as lights on the horizon, which take our fish,” the mayor said.

“With the help of NGOs (non-governmental organisations), it has been shown that an average of 20 illegal vessels a day fish in our waters, which are taking our resources, and we don’t want them to be exhausted,” he added.

Bachelet also announced the creation of the Nazca-Desventuradas Marine Park covering 297,518 sq km, which will be the biggest such protected area in the Americas.