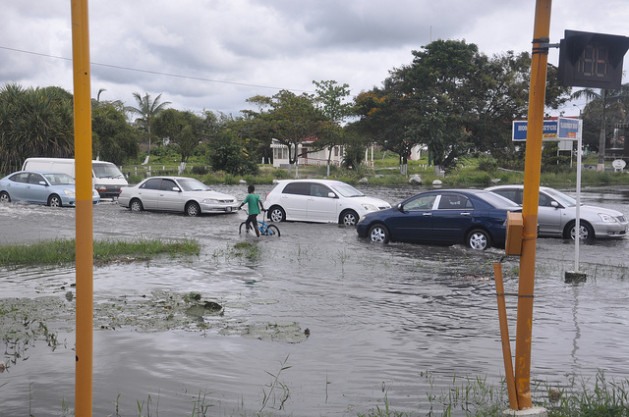 A boy walks with his bicycle on a flooded street in Georgetown, Guyana. About 80 percent of wastewater that enters the Caribbean Sea is only partially treated or untreated. Credit: Desmond Brown/IPS

GEORGETOWN, Guyana, Nov 30 2013 (IPS) - It’s a dirty, smelly business, but wastewater is gaining prominence across the Caribbean as countries from Jamaica in the west to Guyana in the south increasingly recognise its effects on the environment and the importance of improving its management.

Coordinator of the Guyana Wastewater Revolving Fund Marlon Daniels told IPS that with the advent of climate change, protecting the environment has become more of a challenge for countries of the region.

The impact of sea-level rise on [urban] wastewater systems may be particularly severe." -- Dr. Adrian Cashman

He explained that climate change has resulted in unusual weather patterns, including more rainfall and flash flooding, and these have caused an increase in sewerage entering the sea.

“One of the effects of improving access to water, as required under Goal 7 of the United Nations Millennium Development Goals, is that more people instead of using a pit latrine now use a flush toilet, so they have an on-site treatment in the form of a septic tank,” Daniels said.

“When you have a huge storm or heavy rain, you have a toxic soup. There is refuse from septic tanks, which is not as dirty as raw sewerage but it’s still rich in nutrients and pathogens. All of that wastewater ends up in the environment as floodwater and you have populations being exposed to that.” 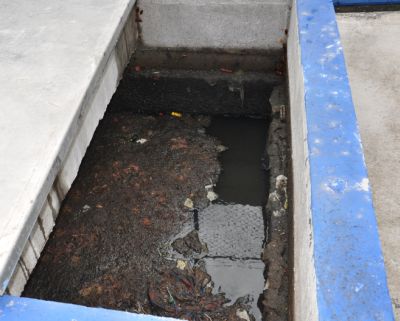 Dr. Donna-May Sakura-Lemessy, deputy director at the Trinidad-based Institute of Marine Affairs (IMA), says while the Caribbean benefits tremendously from the tourism industry – last year visitors spent an estimated 26 billion dollars – tourism-dependent economies of small island Caribbean states suffer the most from untreated wastewater with the destruction of reefs and the pollution of beaches.

“Poor wastewater management leads to degradation of both your potable water sources and your environmental resources. So what will happen is that your swimming waters will be contaminated and this could lead to gastro-intestinal diseases and things like ear infections,” Sakura-Lemessy told IPS.

“So if the resources are degraded then the chances of you maintaining a healthy tourism sector are minimised and you would lose out on whatever revenue tourism would bring to you.”

In some Caribbean countries, tourism employs eight out of 10 people, she stressed.

“Stay out of the water as much as possible, as it can greatly reduce your chances of contracting diseases such as skin infections, leptospirosis, diarrhoeal diseases and other water-borne diseases,” Persaud said in an advisory.

She also urged residents to keep food separate, protected from the flood water; to throw away all food that has been in contact with the flood waters; and to wash all fruits and vegetables with treated water.

“Many of the urban areas in the Caribbean are located in low-lying coastal areas with some 40 percent of the population living within two kilometres of the coast,” Cashman said.

“Given that the majority of urban areas are not serviced by centralised sewerage systems and therefore rely on other means of disposal, the impact of sea-level rise on these wastewater systems may be particularly severe.

“The potential effects are higher groundwater levels which will restrict the ability to soak away effluent and back-up systems as well as restrict biological activity that provides the assimilative capacity. This in turn will lead to elevated levels of beach and marine pollution, contribute to eutrophication of bathing waters and the creation of marine dead zones,” Cashman added.

In 2011, the Global Environment Facility (GEF) began funding a four-year project – the Caribbean Regional Fund for Wastewater Management (CReW) – that seeks to provide sustainable financing for the wastewater sector, support policy and legislative reform, and foster regional dialogue and knowledge exchange among key stakeholders in the Wider Caribbean Region.

The Inter-American Development Bank (IDB) and United Nations Environment Programme (UNEP) are the co-implementing agencies for the project. The Project Coordination Group based in Jamaica carries out the day-to-day management of the CReW project, supported by Pilot Executing Agencies (PEA) in Jamaica, Belize, Guyana and Trinidad and Tobago.

Project Coordinator of the GEF CReW Denise Forrest said that about 80 percent of domestic wastewater that enters the Caribbean Sea is only partially treated or untreated.

“If we fail to treat with the issue of managing wastewater effectively, we are perhaps dooming our region to a future that is not prosperous both in terms of our economic development, in terms of the health of our people, in terms of the quality of life, and in terms of hedging our bets in terms of how we adapt to climate change.

“It is absolutely essential that we deal with this issue,” Forest added.