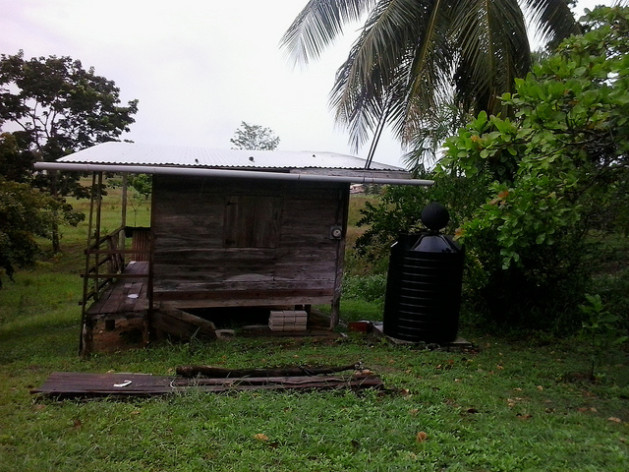 Rainwater harvesting is practised in the rural areas of Trinidad, though this open, unfiltered method poses hazards that the design promoted by the Global Water Partnership-Caribbean seeks to avoid. Credit: Jewel Fraser/IPS

PORT OF SPAIN, Trinidad, Oct 27 2013 (IPS) - A centuries-old system for ensuring water security is making a comeback in the Caribbean.

It’s known as rainwater harvesting, and it is now becoming a formal part of the region’s strategic planning in the face of not only more and stronger storms, but droughts as well. By 2100, there could be a 20 to 30 percent decrease in precipitation, research shows, making every drop count.

"The first thing to go in hurricanes is the water." -- Lovaan Superville of NIHERST

“Rainwater harvesting is, in fact, seen as one of the important tools to ensure resilience and redundancy in Caribbean water supplies, in particular to augment existing municipal water supplies,” Dr. Natalie Boodram, manager of the Global Water Partnership-Caribbean (GWP-C), told IPS. “Rainwater can provide a backup water supply in case of disruption.”

One advantage is that the technology is already in place, with many householders, especially in rural areas, creating catchments for rainwater running off of their roofs to supply them with water for daily household use. In the Virgin Islands, slightly more than half of homes use RWH to supply all their water needs.

An estimated 500,000 people in the region at least partially depend on RWH, with the heaviest users including Antigua and Barbuda, the Bahamas, the U.S. and British Virgin Islands, the Turks and Caicos and the Grenadines.

Earlier this month, ministers from the Caribbean Community meeting in Barbados launched a Water, Climate and Development Programme for the Caribbean (WACDEP) that promotes rainwater harvesting as one of the approaches to secure the region’s water supplies.

While RWH has existed for hundreds of years, Boodram says that municipal systems which depend on surface water supplies have displaced it in many parts of the Caribbean, so there’s a need to “re-establish a rainwater harvesting culture in the region.”

The GWP-C has undertaken a number of Caribbean rainwater harvesting projects, as part of its parent body’s worldwide initiative to support the integration of water security and climate change adaptation into development planning.

The aim was to eliminate some of the common problems associated with rainwater harvesting, such as “exposure to air pollution, animal droppings, contaminants from poorly maintained roofs, among other debris,” Boodram explained.

The technology promoted by GWP-C with the help of its partners, particularly the Caribbean Environmental Health Institute, involves a first-flush diverter.

“The first-flush system which forms the bottom part of the downpipe is used to divert the initial water with pollutants from the roof, ensuring that these do not enter the water tank/storage device being used. The first flow of water containing roof debris would then settle at the bottom of the downpipe with the cleaner water settling on top, allowing clean water to enter the storage component,” she explained.

“Because of climate change, we need to be disaster prepared,” she said, adding that “the first thing to go in hurricanes is the water.”

NIHERST outfitted 15 schools with the rainwater harvesting technology, and provided a few of them with solar panels as a backup energy source as well. To ensure maintenance, Superville said they trained about 25 persons in each community, that is, Toco, Moruga, and Barrackpore.

“The materials used to make the rainwater harvesters are easily available, easy to clean. It’s out of local materials and so it is not expensive,” she said. “Any plumber or electrician, once trained in how our system works, can easily duplicate them.”

Interviews with the principals of some of the schools in Trinidad’s southeast communities of Moruga and Barrackpore confirm that the rainwater harvesters have thus far been a success.

Benjamin Santoo, the principal of Rochard Douglas Presbyterian school, told IPS that when the school cleaned the tap water tank, “it has four inches of slush. When we clean the rainwater tanks, we have no such problem.”

“Water used to come once a month [through the mains],” he added. “We depended on water trucks to give us water Monday, Wednesday and Friday. Because of the school population, 500-plus, the water that we had was not enough for both drinking and flushing toilets.”

Dr.  Henry Smith is director of the Water Resources Research Institute, University of the Virgin Islands, where low groundwater resources have made it difficult to ensure a steady water supply.

“Rainwater harvesting at individual installations allows users access to a source that they can manage independently to their benefit as they develop a good understanding of their own needs, what they can expect from rainfall in their local area, and also what other sources of water might be available to them,” he told IPS.

“Harvesting can be a low-cost alternative, or supplement, that is based on relatively simple technology that could make a major difference to many people who might otherwise not be provided for as a result of climate change.”