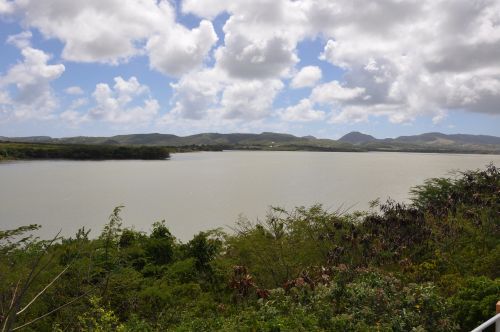 Potworks Dam is the largest freshwater lake in Antigua, holding about one billion gallons of water. Credit: Desmond Brown/IPS

ROSEAU, Dominica, Mar 9 2012 (IPS) - Two years after a severe drought wreaked havoc with a number of Caribbean countries, some are now adopting new strategies in a bid to prevent a repeat of a situation where countries were rationing water and imposing strict restrictions on residents.

“We have embarked on a programme geared towards management of the catchment areas, which includes preventing deforestation, agricultural activities and use of chemicals in protected areas and overall limiting human activities in protected areas,” said Bernard Ettinoffe, general manager of the Dominica Water and Sewage Company (Dowasco).

He told IPS, “We have also embarked on educational programmes at the schools and community levels aimed at raising awareness of the need for conservation of water resources and more recently have begun giving consideration to an Integrated Water Resource Management Approach to the management of land and water resources.”

Ettinoffe said Dominica, like many other countries, has seen some decline in water levels in rivers and streams, but that the island, also known as the nature isle, still boasts of an abundance of good quality fresh water.

“Whereas measures are being taken to preserve the resources for future generations, the risks of no water or even inadequate supplies for decades to come is minimal,” Ettinoffe said.

The neighbouring twin-island state of Antigua and Barbuda is reporting higher than normal rainfall over the past 12 months.

But in spite of the higher than normal rainfall, an Antiguan meteorologist has expressed concern that not enough rainwater is being caught.

“I have always believed that we need additional surface storage so that we can capture and keep more of the rainfall that we do get,” said Keithley Meade, director of the Antigua and Barbuda Meteorological Services.

“The rainfall mostly does not even get to the aquifers (water stored in the ground), since the runoff is pretty fast. This is one area where I think we should have improved and still need to do so,” he told IPS.

Even with their increased focus on water management, financial constraints will prevent representatives of the tiny islands in the Caribbean from attending a major gathering next week to discuss this vital commodity – the 6th World Water Forum in Marseille, France from Mar. 12-17.

Despite their absence though, Caribbean countries say they will be keeping a close eye on the meeting, which has set the ambitious target of going down in history as the forum that will bring solutions to water, based on openness and exchange.

“DOWASCO will certainly be keeping an eye on the meeting and will be looking forward to reviewing the findings and recommendations,” Ettinoffe said, noting particular attention would be paid to the issue of climate change.

“Climate change and climate variability is as real to Dominica as to many other countries. We are experiencing more intense rainfall and also occasional drier spells, both of which come with their own challenges which must be managed.

“More intense rainfalls result in siltation of streams and rivers and greater need for water treatment and even the need to shut the supply down at times. During drier periods, there is always need for caution and conservation,” he added.

Salinisation of fresh groundwater is yet another concern for Caribbean islands.

“Both Antigua and Barbuda are small islands. Our well fields are close to the coast, hence the salinisation of this resource (by over exploitation or rising sea levels) is a major concern,” Rodrigues said, noting “our plans include artificial recharge, reducing exploitation in some areas, seeking inland resources, and improving monitoring systems.

“We have also installed additional desalination capacity on Antigua and we are in the process of doing the same for Barbuda,” Rodrigues added.

But he said the additional desalination capacity will not meet present needs of a country which presently utilises 20 percent surface water and 10 percent groundwater.

Programme Director at the St. Lucia-based Caribbean Environmental Health Institute Professor Christopher Cox says sea level rise and salinisation is a concern in other parts of the Caribbean as well.

“What happens is that as you draw more fresh water it actually pulls in the salt water with it. If you get sea level rises, the saline interface with the fresh water will rise also, or move further inland so that means it’s more likely that your wells will be intruded with salt water.”

Cox said the Caribbean is very vulnerable in terms of its fresh water resources, noting that the human influences were to blame.

“It’s not only about clearing trees but you reduce water availability when you pollute the water. For example, in the case of Antigua, we’ve heard that there is a lot of land use conflicts and some of the reservoirs are receiving direct contamination from households and other types of activities whether it be agriculture or commercial enterprises.”

He also pointed to problems with water availability in rural areas of St. Lucia, Jamaica and Trinidad.

Cox said juxtaposing these situations with the climate change issues, where it is being forecast that the Caribbean region, particularly the Eastern Caribbean, could see declines in average annual rainfall by between 30-50 percent, the dry seasons will become more intense and result in problems with water supply.

He said Caribbean governments are slowly coming around to the whole concept of Integrated Water Resources Management, with Jamaica being the most advanced in this regard.

“Governments are slow to put in place strong polices for protection of water resources. The big problem is that people in the Caribbean think water is free.

“But there is a cost to get it to the stage where it does not constitute a health risk. In the Caribbean, water is not given the level of importance it deserves,” he told IPS.