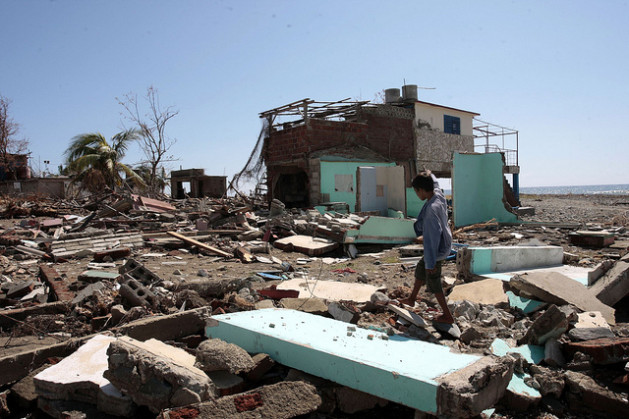 The eye of Hurricane Sandy made landfall on Oct. 25, 2012, near the Mar Verde beach west of the city of Santiago de Cuba. Credit: Jorge Luis Baños/IPS

But days before, in the Caribbean, the same storm ran roughshod over Jamaica, Haiti, Cuba and other countries, causing widespread loss of life and destruction that the region is only beginning to recover from.

"If you don’t start investing, for every dollar not spent on adapting, you will spend six or seven within a few years." -- UNDP's Guido Corno

The hurricane was one of several in the past decades that meteorologists had previously considered “once in a century” events.

“The power of these storms is off the chart,” Guido Corno, chief technical advisor at the United Nations Development Program (UNDP), told IPS. “Sandy was a massive storm, larger than any in the past 100 years.”

Scientists believe that by the end of the century, climate change will increase the severity of extreme weather events, making storms like Sandy more common.

For Caribbean nations with fewer resources, that spectre is daunting.

A path of destruction

On Oct. 24, Sandy strengthened into a Category One hurricane and made landfall in Jamaica, causing widespread damage in the east of the island.

Seventy percent of residents were left without power and in Portland Parish, on the northeast coast, the Red Cross reported 80 percent of houses had lost their roofs.

In Haiti, though the storm only skirted the coastline, it dropped nearly 20 inches of rain in the south of the country and came as a severe blow to hundreds of thousands still left homeless after the 2011 earthquake.

Least to Blame, Most to Lose

In September, Haiti and Jamaica were among 14 Caribbean nations that announced plans to sue England, France and the Netherlands for reparations for slavery in the International Criminal Court.

The similarities – a few wealthy countries profiting at the expense of the developing world – are not lost on Albert Daily.

“The truth is in the [climate] negotiations that go on, there isn’t so much emphasis on fulfilling financing so we can be in a position to adapt to climate change," he said. “We contribute less than one percent of [greenhouse] gases, yet we suffer the most."

Until the international community takes into account the transfer of wealth away from at-risk developing countries that climate change implies, countries like Jamaica will do their best to manage the consequences.

Despite suffering a direct hit by the storm, only one person was killed on the island, as many Jamaicans were relocated or sought refuge in government shelters.

Education programmes like those in Cuba are vital to saving lives, said Daily.

“We know that when people have been made aware of extreme weather, they are more likely to listen to guidance.”

Already in 2012, Tropical Storm Isaac, which damaged parts of the north, had been followed by a drought that led up to Sandy. The combined effect of the three devastated Haiti’s farmers and left some 1.5 million Haitians at risk of malnutrition.

Residents in Santiago de Cuba, accustomed to storms that usually pass over west of Cuba, were caught unaware when the storm made landfall in the city as a Category 3 storms with winds up to 110 mph. Eleven died and half the houses in the city were either destroyed or severely damaged.

“Now I know what a hurricane is; when another comes, we won’t delay,” Rey Antonio Acosta, 12, who escaped the storm with his older brother, told IPS.

Though the hurricane was the deadliest to strike Cuba in seven years, the toll was relatively low considering its severity.

Cuba’s longstanding system of civil defence, which calls on all citizens in the event of disasters, has been able to plan well in advance of approaching hurricanes – recently with the help of climate change models – and spring into action quickly after storms pass.

The U.N. has highlighted the country’s disaster prevention initiatives that include “two-day training session in risk reduction for hurricanes, complete with simulation exercises and concrete preparation actions” as a model for the Caribbean.

Still, a year after Sandy, the government’s recovery efforts, hampered by the local economy and a U.S. embargo, have struggled to keep pace with a nationwide housing deficit that already existed well before the storm.

In Haiti, like much of the region, “water is the main issue,” said Johan Peleman, head of the U.N.’s Office for Coordination of Humanitarian Affairs (OCHA) in Haiti.

Port-au-Prince, a city of nearly 2.5 million, has no sewage system.

The hurricane worsened a cholera outbreak – alleged to have been brought by U.N. peacekeepers – that began in 2010 and has since infected more than 650,000 and led to the deaths of over 8,000 Haitians.

“Waterborne diseases were already one of the mass killers in Haiti,” Peleman told IPS.

The solution, an institutionally funded effort to build a water and sewage system from scratch, may take decades to fully complete.

What Haiti lacks in human-made infrastructure is only matched by what has been destroyed by human activity.

After years of often illegal logging, only two percent of the country is forested, leaving many areas vulnerable to mudslides that can wipe away neighbourhoods in heavy rains that pale in comparison to those seen during Sandy.

But mangroves, which serve as a natural barrier from the force of hurricanes and were lately on the verge of an ecological catastrophe in Haiti, have in recent years been included in preparedness plans and are making a slow but marked comeback.

After the earthquake and continuing in the wake of Sandy, the Haitian government, with significant outside funding began a process of disaster risk mitigation, mapping neighbourhoods by their risk assessments and marking houses with red, orange and green to indicate their habitability.

Still, as of July of this year, 279,000 internally displaced people were living in tent camps originally built after the earthquake, though it is difficult to delineate which catastrophe made them homeless.

For a region jarred by last year’s hurricane season, the third most active on record, 2013 has been eerily quiet.

“This hurricane season, the forecasts were for normal to above normal activity,” Caesar told IPS. “But that hasn’t manifested itself – there have been no named hurricanes.”

In September, the U.N.-sponsored Intergovernmental Panel on Climate Change (IPCC) predicted temperatures could rise by as much as 4.8C by the end of the century, increasing food insecurity and harming many developing countries.

Years like 2013 are to be expected and shouldn’t be taken as indicative of trends, the panel said.

Even in a country as small as Haiti, where the northwest is predicted to experience temperature gains that outpace the rest of the country, the effects of climate change are expected to vary greatly.

Similarly, in Jamaica, climate studies “project we will have more rainfall in the next 20 years, then less after that,” said Albert Daily, principal at the climate change division of Jamaica’s Ministry of Water, Land, Environment and Climate Change.

“There will be fewer hurricanes, but they will be stronger,” he said.

Daily said sea level rises pose a severe threat to coastal infrastructures and countries in the region are trying to head off the threat as early as they can by changing the dialogue on environmental issues.

“We are mainstreaming climate change policy in the planning of programmes and legislation,” Daily told IPS.

Part of that effort is convincing foreign donors and the treasuries of heavily indebted countries like Jamaica that the upfront costs associated with planning for climate change are about the best investment any country can make.

“It’s been shown, if you don’t start investing, for every dollar not spent on adapting, you will spend six or seven within a few years,” said Corno. “These costs will continue to skyrocket unless you have a long-term plan.”