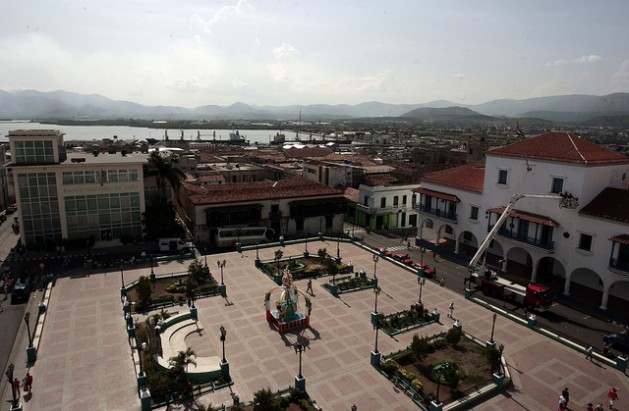 “We have more information now, and more awareness of what happened, which was very hard to accept,” 31-year-old musician Melly Álvarez, who lives in the hard-hit centre of Santiago, told IPS.

“We never thought something like this could happen to us. Since Sandy we keep alert to meteorological warnings and we take precautions, to avoid further surprises,” she said.

Experts say every city in this Caribbean island nation should take precautions against hurricanes, especially places like Santiago de Cuba, which is in mountainous terrain and has densely-populated residential buildings.

“Education must be stepped up in parts of the country that don’t suffer these things frequently or with great intensity, to increase awareness of the risks,” meteorologist José Rubiera said in a recent interview with IPS.

The collapse of an adjacent building caused serious damage to Álvarez’s house, still only partially rebuilt despite a huge effort by her family. “At first there was corruption in the distribution of materials, but the authorities took measures and the reconstruction process was accelerated. It is more organised now,” she said.

The housing sector undoubtedly took the brunt of the up to 200 kilometres an hour winds that swept the city in the early hours of Oct. 25, 2012.

According to official figures, 15,888 housing units were completely destroyed and 22,000 partially collapsed. The total number affected is equivalent to half the housing stock in this city 847 kilometres from Havana.

Many buildings lost their roofs, and families are impatient over the delays in replacing them. “We need six million square metres of roofing and the country produces barely one million,” Madeleine Cortés, vice president of the state administrative council in Santiago province, told foreign journalists.

People whose homes were damaged receive a state discount of 50 percent on the cost of building materials and low-interest bank loans with long-term repayment plans. In the case of families who were left without a home, the state pays the cost of bank loans, while it also subsidises the lowest-income families.

Cortés said that as part of the recovery strategy, a programme has been designed to build 21,400 housing units for those affected by Hurricane Sandy, as well as families in the poorest neighbourhoods, by 2019.

According to the authorities, every new building must take into account the risk of hurricanes and earthquakes.

In Mar Verde, a beach community west of the city of Santiago, close to the spot where Hurricane Sandy made landfall, more than 40 families are waiting for new housing to be built to replace their homes, which were laid waste by the sea. In the meantime, they are living in cabins that used to be rented out to holiday makers.

“They are looking for solid land further away from the coast, as had been decided before the disaster,” said Heriberto Téllez, a 53-year-old caretaker of an agricultural cooperative who, like his neighbours, hopes that the new homes will come equipped with the electrical appliances that were swept away by the waves.

“We are a poor country, not everything can be done all at once. It will be our turn soon,” he told IPS.

Campesinos or small farmers from the southern coast of the province of Santiago said the worst thing in that area was the aftermath of the hurricane.

“Usually you’re happy because the cyclones bring rain,” Carlos Arias, president of an agricultural cooperative in the area, told IPS. “But Sandy did not alleviate the intense drought in these parts. It has barely rained at all in the last nine months.”

The farmer added that due to post-disaster stress, rabbits, pigs and other farm animals stopped breeding, hens laid fewer eggs, cows gave less milk and even bees did not make honey for a time. “We will be feeling the effects of the catastrophe for several years,” he said.

The government of President Raúl Castro reported in late July that the damage caused by Sandy to housing, roads and utilities like electricity and telephone lines in the three most heavily affected provinces – Santiago de Cuba, Holguín and Guantánamo – and by heavy rainfall and flooding in the central region of the country was estimated at seven billion dollars.

In Santiago alone, losses amounted to some 4.7 billion dollars, according to the provincial authorities, including 2.6 billion dollars due to total or partial destruction of housing.

In 2008, tropical storm Fay and hurricanes Gustav, Ike and Paloma damaged 647,111 housing units in the country.

Extreme weather events have compelled the Cuban government to devote the majority of its housing resources to replacing homes damaged by hurricanes and heavy rains. The country has a housing deficit of approximately 700,000 units, according to the Economic Commission for Latin America and the Caribbean (ECLAC).

The eastern part of this island of 11.2 million people is also at risk from earthquakes due to its proximity to the Bartlett or Cayman Trough, a complex fault zone that forms part of the tectonic boundary between the North American and Caribbean plates. This poses yet another threat to housing in the region.